Fanfic / To the Stars 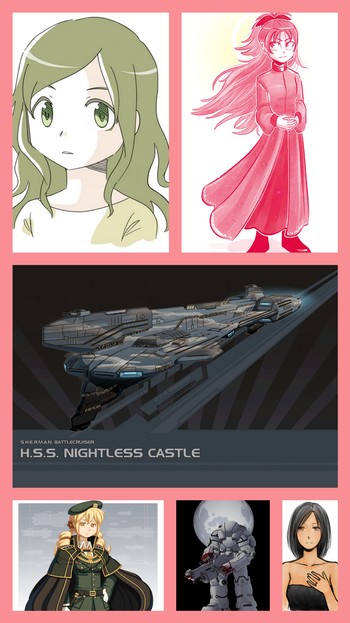 .
"Kyubey promised that humanity will reach the stars one day. The Incubator tactfully refrained from saying too much about what they would find there."
Advertisement:

In the latter half of the 25th century, humanity finds itself locked in total war against alien invaders.

The Cephalopods attacked without warning and for no discernible reason. Their weapons have a significant technological edge over humans, and the science with which they build their wormhole generators to spread into human space is inconceivable to humanity's most brilliant minds and A.I.s. The only hope for turning the battle in humanity's favor lies within its aloof allies: the enigmatic Incubators, and the direct consequences of their meddling into human affairs: nigh-immortal augmented superhumans able to bend the rules of causality itself.

They are known as... magical girls.

is a distant sequel to Madoka Magica, taking place several centuries after the anime's epilogue. Featuring a detailed exploration of the possible future, it is one of the most thorough Madoka Magica world-building fics.

Two surviving characters from Puella Magi Madoka Magica, Mami and Kyouko, are also main characters in this fic, and Yuma from Puella Magi Oriko Magica appears in a supporting role. The third and central protagonist, Ryouko Shizuki, is a girl whose entry into the world of magical girls begins a little after the story's start.

Just to give prospective readers an idea of how long it is, the first 100K words alone cover just the first 24 hours of the story. Despite its length, To the Stars will capture your interest if you're at all interested in realistic assessment of how would the existence and eventual public acceptance of Puella Magi affect mankind for the next few centuries, and what would it look like if magical girls were starring in rather hard Military Science Fiction set in an elaborate, massively detailed world of the 25th century.

Dark and deconstructive elements as well as interpersonal drama, however, have been toned down - which, however, is expected as the story is set after the original series' uplifting ending. note The fic began before the release of Puella Magi Madoka Magica the Movie: Rebellion and ignores events from the film, although Word of God has considered the possibility of incorporating some references to these.

The epic tale can be found on FF.net

, featuring additional details (see sidebar) along with answers to reader-submitted questions (which are, for some reason, currently dominated by characteristically nonsensical submissions) and the update twitter can be found here

Tropes found in the stars include: