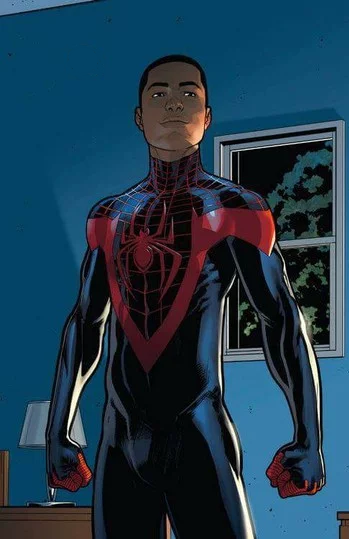 Bitten by another genetically-enhanced spider, 13-year-old Miles was given powers similar to Peter before him, to his dismay. The death of Spider-Man, soon publicly revealed to be the young Peter Parker, shocked Miles out of apathy. Miles convinced himself that acting earlier and revealing himself as an ally to Peter could have spared New York's hero. Finding the will to act, Miles dons a makeshift suit to help fill in the void Spidey left. Miles Morales is the principal protagonist of Ultimate Spider-Man after Peter Parker's death.

Inspired by the election of President Barack Obama and actor Donald Glover's unsuccessful campaign to play the lead role in The Amazing Spider-Man, Bendis created Miles in the Ultimate universe and planned the Death of Ultimate Peter Parker as an event to specifically introduce his successor. Miles' first appearance was in Ultimate Fallout, a miniseries that provided a requiem for Peter's death, and then officially debuted as Spider-Man in the second volume of Ultimate Comics: Spider-Man. Miles shares a bit in common with his predecessor, namely their mutual gravitation toward science and many of the same abilities — namely Spider-Sense and wall-crawling. But unlike Peter, Miles wasn't fame-obsessed and cocky when he started out. Rather, he was confused and weirded out about his powers, especially because his father Jefferson was mutant-phobic (at the time) and disliked costumed heroes. Peter's death drives him into action, where Miles, on seeing the death of The Heart of Ultimate Marvel, comes away believing that had he been on the scene and active, Peter might well have survived the day. In effect, Peter Parker becomes Uncle Ben to Miles, inspiring him to uphold his legacy and spirit. In addition, Miles is younger than Peter when he started out in both the Ultimate and 616 continuity. He was still in grade school when bitten by his own genetically-modified spider. Where Peter had only Aunt May as his family, Miles lives with his parents and has many relatives. He's also on the whole far less neurotic than either classic or ultimate Peter. In addition, he has some powers that Peter didn't have, with extra abilities like Spider-Camouflage and venom blasts, but at the same time, not being as fast and agile as Peter is. Fundamentally, Miles shares the main quality that Peter embodied, the archetype of the underdog hero, with his civilian mixed-race Hispanic and African-American identity, his more tactical and sneaky skillset, and his small frame transplanting and updating the original roots of Peter Parker as the teenage Working-Class Hero for a new generation.

Miles' first major story arc involved confronting his criminal uncle, dealing with questions of Nature vs. Nurture; an especially prescient topic for a young black man like himself, trying to do some good in a world stacked against him. Further storylines saw him clash with S.H.I.E.L.D., The Ultimates, and HYDRA. He even crossed over with the 616 universe on a few occasions, mostly notably in the pages of Spider-Men, where he met the mainstream Peter Parker, and All-New X-Men, where he befriended the time-displaced Jean Grey. When the Ultimate Marvel line started winding up, owing to declining sales, Miles nonetheless remained in demand, getting his new ongoing title — Miles Morales: Ultimate Spider-Man — and featuring on the All-New Ultimates team. When Ultimate Marvel ended in 2015 during the Secret Wars event, Miles was imported directly into the 616 Universe, in the All-New, All-Different Marvel universe that rose from the ashes of Secret Wars which was perhaps Miles' official implementation into the altered Earth-616. Not only was Miles serving as New York City's official Spider-Man in his third ongoing title, Spider-Man, but he also joined the All-New, All-Different Avengers. He subsequently left to become a member of the new Champions. His co-creator and first writer Bendis left Marvel in 2018, ending a landmark run on the character, where he finished it with Spider-Men II which resolved and tied up all loose ends about Miles Morales' future in the 616 (namely he's here to stay and he can't go back to Ultimate Marvel anymore). Shortly afterwards, Marvel announced Miles' fourth ongoing, Miles Morales: Spider-Man, with Saladin Ahmed taking over as writer.

Miles Morales is by a significant distance Spider-Man's most successful Legacy Character, achieving a level of fame, critical recognition, and a fan-following that eluded the likes of earlier cult-favorites such as Miguel O'Hara, Ben Reilly and Mayday Parker. He made his first appearance in the Ultimate Spider-Man (2012) cartoon (where he's voiced by Donald Glover, Bendis' acknowledged inspiration and muse). He also appeared in the successor show Marvel's Spider-Man where in a wrinkle, he and Peter are both teenagers and class-mates. In 2018, he appeared in Spider-Man (PS4) where he's even playable in many sequences showing his pre-Spiderbite origins. In that same year, Miles made his big-screen debut in the Oscar-winning Sony animated film, Spider-Man: Into the Spider-Verse, voiced there by Shameik Moore (The Get Down), where he's the star and main protagonist. In 2020, it was announced he was getting his own spinoff video game in the PS4 Spider-Man setting.

Miles is acclaimed for proving the success of diversity in mainstream comics, and is seen as the character that inspired Marvel's ongoing effort to diversify their roster, which has since seen the introduction of Kamala Khan as Ms. Marvel, Carol Danvers' promotion to Captain Marvel, Sam Wilson taking up the Captain America mantle, and Jane Foster becoming Thor.