Pokémon come in 18 different types, each with its own advantages and disadvantages. When the franchise began, these types were little more than gameplay elements, but over the years, Game Freak and the fandom have added more than enough depth to the types to make them characters in their own right. This page is for types that were introduced in the first-generation games and were considered to be special types in those games.

Pokémon with power over fire, lava, and all forms of heat. Most of them are Glass Cannons, but surprisingly, the type has a lot of resistances (Bug, Grass, Ice, Steel, Fairy, itself). Most Fire-Type moves are also capable of inflicting the Burn status, which causes damage while also halving the afflicted Pokémon's physical attack. Fire types are immune to the Burn status themselves, which is handy for the physical attackers among them. They are based on fantastical animals that can breathe fire, but there are a few, such as Magmar and Chandelure, which are more esoteric. Fire is also one of the three starter types.

They tend to live in particularly hot areas, like volcanoes, but as not every game has that kind of environment, they can be just as comfortable in caves or urban areas. Due to fire being one of the less naturally common elements, non-starter Fire-types tend to be rare and few in number.

With 70 percent of the Earth covered by it, it isn't difficult to imagine that Water Pokémon are the most common type. It's one of the three types that has been paired with every existing type at least once (the other being Flying and Psychic). Most Water-types are based on aquatic animals, both marine and freshwater, and is one of the three starter types. They can be found on every aquatic route, and some of the more amphibious types can be found in wetlands. They can also be fished out using various fishing rods.

Offensively, they are strong against Fire, Rock, and Ground, but are resisted by Grass, Dragon, and other Water-types. Defensively, they resist Fire, Ice, and Steel and are only weak to Electric- and Grass-types (but most Grass-types don't want to hang around them willingly), making them pretty hard to wear down.

Grass-type Pokémon is a misnomer. The type is associated with all plant life, autotrophic protista, even heterotrophic crinoids and fungi. They tend to be Mighty Glaciers, strong and sturdy like a tree, but slow to move, though there are several outliers, such as Jumpluff, Sceptile, Whimsicott, and Kartana, who are particularly speedy. It's one of the three starter types. As the name implies, they can generally be encountered wherever tall grass is found, but a few, like Cacturne and Abomasnow, can be found in places that seem inhospitable to plant life, proving their resilience.

Grass-types can be difficult to use effectively in battle, as they are heavily disadvantaged in many different ways. They have FIVE weaknesses (Fire, Flying, Ice, Poison, and Bug), their attacks are resisted by seven types (Fire, Flying, Poison, Bug, Grass, Dragon, and Steel), and their movepools tend to be poor, with many Grass-types lacking options other than Grass, Normal, and other attacks/moves from their secondary types. Despite this, they are good at spreading around status effects and passive damage through Leech Seed and the like. Grass types are also good at blocking such status effects themselves, as they're immune to powder moves and Leech Seed. Lastly, their positive defensive matchups can still be relied upon, as Grass is one of only three types to take less-than-neutral damage from Ground and Electric — and, as exemplified in the starter type triangle, also resists the ubiquitous Water type, although its access to Ice moves makes handling Water-types themselves much riskier than taking a Water-type move.

Electric-types are known for their ability to control electricity. Most of them are known for extraordinary speed stats. They are also capable of inflicting the paralysis status (though this ability isn't exclusive to electric-type moves). Paralysis cuts the affected Pokémon's speed, and there's also a chance that it can't move at all. Electric types are immune to Paralysis themselves. A lot of them are electricity-generating animals, but a number of machines are among the ranks. Electric rodents appear to be particularly common.

Offensively, it is effective against two of the most common types in the game (Water and Flying), while it is resisted by Grass-types, Dragon-types, and other Electric-types, with Ground-types being immune. Defensively, it resists Flying, Steel, and itself, and is only weak to Ground. To balance this, most Electric-types have weak defenses.

They mostly make their homes in urban regions, but some take up residence in caves and forests, the latter most memorably being where Pikachu are found.

Pokémon with the ability to control ice, snow, and/or cold temperatures in some manner. A lot of them are based on arctic animals, animals found in cold water, or personifications of snow and ice. Many Ice moves can inflict the very debilitating Freeze status, which renders the victim virtually immobile (unless you are lucky enough for it to thaw out). Ice-types are hardy enough to be immune to Freezing themselves, and as of Generation VII, Sheer Cold. Ice is typically one of the harder types to find, as they only reside in colder areas. They also tend to appear late in the game, and Ice-type specialists are either among the last two Gym Leaders fought in the region or a member of the Elite Four. Ice is the rarest type as of Generation VII.

When a hailstorm is in effect, Ice-Type Pokémon take no residual damage from it.

Pokémon with various types of mental or magical abilities, they have a tendency to be used whenever a particular Pokémon has a vague sort of magical power that doesn't fit any of the other elemental types. They are usually found in more urban environments.

On paper, Psychic-Types were supposed to be weak to Ghost and Bug, but both of those types were rare with only weak attacks (not helped by a glitch that made it outright immune to Ghost), and a quarter of all Pokémon in Gen I were part Poison (including the only Ghost-types at the time, as well as the only Bug-types with Bug-type attacks worth a quasi-significant fraction of a fuck). Add on the facts that Psychic-types favored the Special stat, which governed Special Attack and Special Defense, that there were a lot of strong Psychic-types (including Mewtwo, one of the most powerful Pokémon in the series), and that Psychic was only resisted by itself, and Psychic was one of the best types in the game. This reign of terror ended with the introduction of 2 types, Dark and Steel, both of which were defensively strong against Psychic attacks (Dark-types being flat-out immune, as well as offensively strong against Psychic-types), the introduction of better Bug and Ghost moves, and splitting apart the Special stat into Special Attack and Special Defense. Furthermore, Psychic is only resistant to itself and Fighting, making it the second-worst defensive typing after Ice. Needless to say, the Psychic-type is no longer a Game-Breaker. Nonetheless, Psychic is the type with the most Legendary and Mythical Pokémon associated with it, with all generations having at least two of them being at least part Psychic, with the exception of Gen VI (which only had one). Its also the third type to be paired with every other type after Flying and Water. 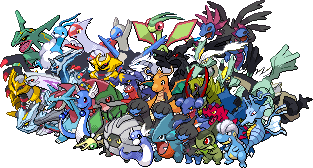 A group based on dragons and similar monsters from around the world. They are among the most elusive types, usually only appearing in secluded areas. As such, they are the third-rarest type. Their elusiveness is often related to their power, and some of the strongest and most dangerous Pokémon in the series are Dragon-type. This power, combined with their mysteriousness, makes them very well-regarded in some circles. Dragon is a popular type for Legendaries. While the Dragon type covers most dragonlike Pokémon, there are a few dragonlike species that lack the typing but have similar properties and movepools; conversely, not all Dragon-type Pokémon are based on animals that can be classified as (or even resemble) dragons. The existence of Regidrago, a being made of "dragon energy", suggests that the Dragon type comes from moves or Pokémon having properties of said energy rather than strictly whether their design basis is draconic (though they coincide in most cases).

Offensively, they are only super effective against themselves, are resisted by only Steel-types, and completely ineffective against Fairy-types. They don't need to hit super-effectively to make it hurt. They resist Water, Grass, Fire, and Electric, but are weak to Ice and Fairy, giving them some nice defensive applications.