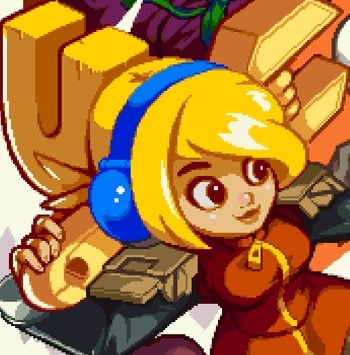 A 17-year-old girl living on her own near Settlement 17. She's secretly an unregistered mechanic, and when this is discovered by One Concern, she's thrust into a journey to help newfound friends and take on the regime.
Advertisement:
Mina 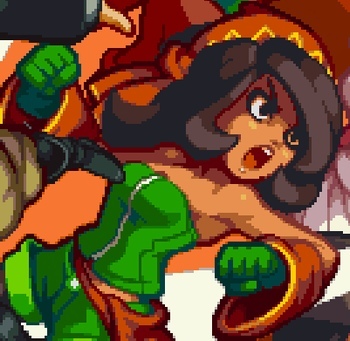 A pirate in both outfit and attitude, Mina is actually one of the Isi, a hidden society that has cut all ties with One Concern. She meets Robin in jail after an unsuccessful heist, and the two quickly become close allies.
Elro 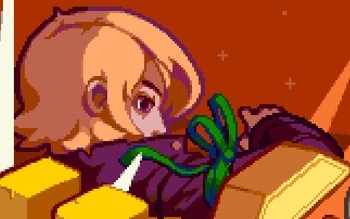 Robin's brother, who lives away from her with his own family in Settlement 17. After tragedy strikes, he becomes a very sour individual who accompanies Robin on her ventures in order to keep her safe.
Royal 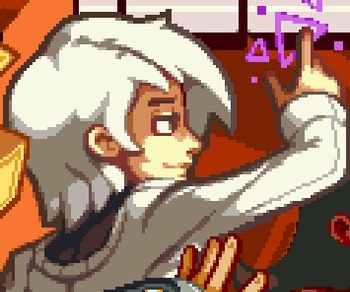 A mysterious, prideful young man Robin comes across soon after she becomes a fugitive. Royal is technically part of One Concern, but he has low opinions of them and instead latches on to Robin, even after learning of her crimes.
Agent Black 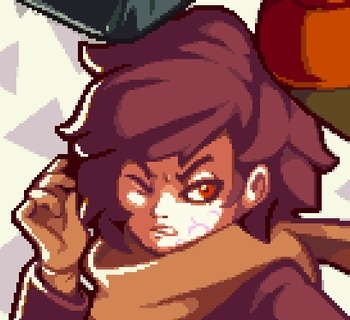 The top-ranking One Concern agent, whose investigation leads to her discovering Robin's mechanic practice. She's defined by her aggressiveness, her lack of emotion, and her desire to apprehend Robin and her family by any means possible.
Advertisement: 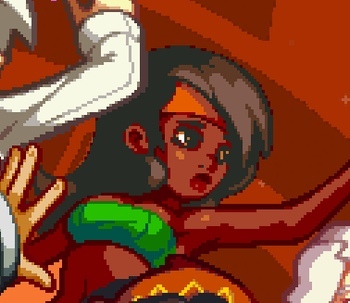 Mina's "close friend" from Isilugar. She's much calmer than Mina and often argues with her, but the two are inseparable all the same.
Gustavo
An Isi doctor recognizable by his pink suit. He doesn't spend much time in Isilugar, instead traveling around the world and frequently crossing paths with Robin and company.
ChemiCo Contra
A group of One Concern workers who secretly research alternative energy sources against their employer's wishes.
Teegan
A lead scientist in the ChemiCo Contra. She is fairly close to Elro.
Advertisement:

In General
The main enemy faction of the game. Built around the religion of the Tri, which worships the three figures of the Starworm, the Medium, and the Stars, the organization controls nearly the whole planet. Controlling state, church, and corporate practices, they have a monopoly on Ivory, the substance that fuels everything, and want to get rid of their competitors, the Isi, as well as any heretics who disobey their laws.
Mother 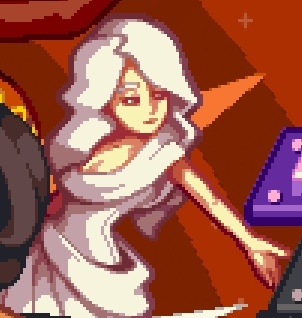 The leader of the One Concern. Mother has immense power over the Tri and is revered as a goddess by her people, though she still answers to Him.
Mother's Corners
Mother's personal guards who accompany her whenever she makes a public appearance. In addition to being powerful warriors, they are fiercely loyal to Mother and her ideals.
General Chrome 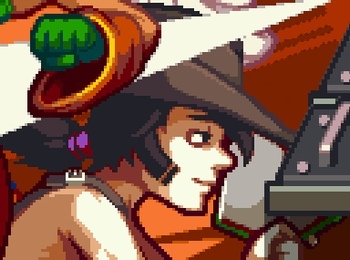 The commander of One Concern's foot soldiers. Chrome's ability to gain trust is indisputable, but is undermined by his obsession with the religion of One Concern.
Emmet Darland
The leader of the Bastion Suits that administrate the One Concern. He is in charge of several operations in the Concern. Greedy and corrupt, he only cares for profit.
Agent White
Agent Black's muscle, and the only person she regularly tolerates. White is a man of few words and more finger-pointing, and he's loyal to Black and follows her orders well.
Tolo
Chrome's second-in-command, and nobody understands why Chrome chose him of all people. He's very enthusiastic about his job, even if he is one of the least competent members of One Concern.
The Silver Watchman
One Concern's resident silent samurai. He's the main guard of the Tower, and clashes with Robin several times as she tries to explore it.
The Reborns

A trio of freshly Transcended humans pitted against Robin and her friends as they storm One Concern East. Mendeleev is the fiery berserker, Nobel is the silent assassin, and Lawrence is the inquisitive bruiser.
The Starworm (HEAVY SPOILERS)

Otherwise known as Him. The Starworm is the god of the world residing near the crumbling moon, and Mother represents Him; unfortunately, He has been very angry at the Penance of the world, causing One Concern to anticipate the end times.

Polro
The father of Robin and Elro, and a mechanic himself. Polro died prior to the events of the game, but he appears in Robin's thoughts several times to address her.
Settlement 17 Residents

Elro's wife and daughter.
Myron, Pola, and Vonn
A group of seafarers. Myron is the captain and a cartographer, illegally making maps of the world; Pola and Vonn are his two dour assistants.
Ash
A resident of Ferrier Shockwood, Ash prefers to be secluded and ignores the world at large. Robin and Mina come to him in order to gain advice about infiltrating One Concern's headquarters.
Agent Grey
The third agent of One Concern, who unfortunately died not too long before the game starts. They stand out for being a lot more sensible than most of their co-workers.
Letícia and Fitzroy (SPOILERS)
Letícia is a hooded nomadic woman who tells stories to Robin whenever they cross paths. Her stories speak of the long-lost hero Fitzroy and his lover, though there may be more to the tale than it seems.