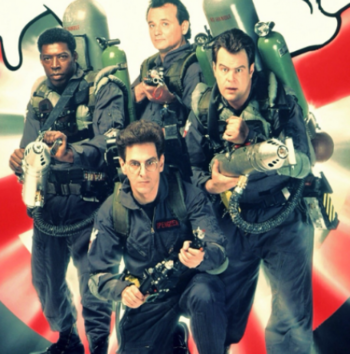 "We're ready to believe you!"
"Who you gonna call?"

A team of eccentric scientists who discover ghosts (or "ectoplasmic entities") are real and develop technology to capture them. They start a ghost-catching business in New York City. 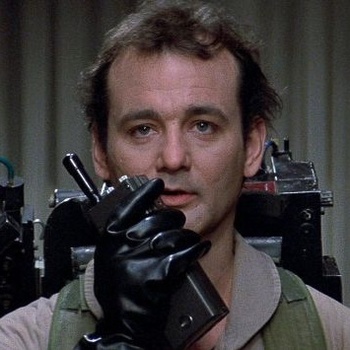 " I don’t have to take this abuse from you, I’ve got hundreds of people dying to abuse me."

The Face of the Ghostbusters, Venkman is psychology professor (though sleazy Con Man would be a more accurate description) who founded the Ghostbusters with Egon and Ray less in pursuit of studying the paranormal and more to turn a profit. He acts as the Ghostbusters' spokesman and is the one who usually talks with clients. 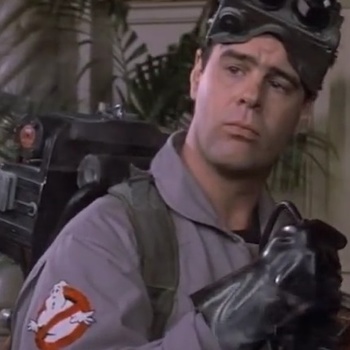 "Well, this is great. If the ionization-rate is constant for all ectoplasmic entities, we can really bust some heads... in a spiritual sense, of course."

The Heart of the Ghostbusters. Ray is the one who is the most interested in ghosts, and will often be the most excited when encountering something supernatural. He provides knowledge of folklore to compliment Egon's scientific knowledge when figuring out how to deal with a ghost. After the first movie Ray opened up and occult bookstore: "Ray's Occult Books". 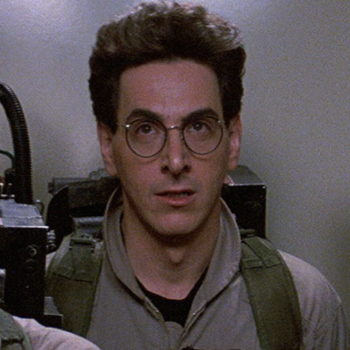 "I collect spores, molds, and fungus."

The brains of the Ghostbusters. He designed all the team's equipment and normally comes up with the plan to trap the ghosts. Overly analytical, Egon comes off as more cold and distant than he actually is. 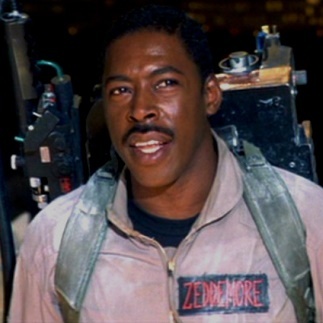 "If there's a steady paycheck in it, I'll believe anything you say."

The normal one of the Ghostbusters, Winston joined when he saw an advertisement in the newspaper looking for a fourth member. The most down-to-earth member of the team, originally joined for the money, but is still a loyal and heroic member of the team. 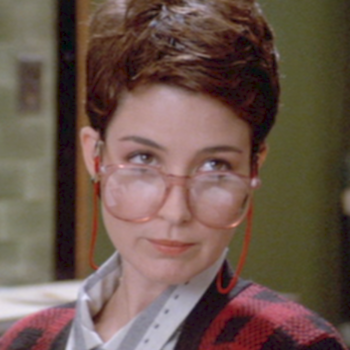 The Ghostbusters' secretary/receptionist, Janine is incredibly sarcastic but very loyal to the Ghostbusters, and often entrust her with keeping everything running that they are too busy to handle. In most continuities she acts as Sixth Ranger for the Ghostbusters whenever they need extra muscle or a replacement. 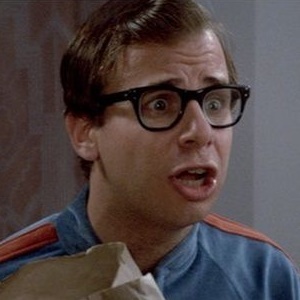 "Who does your taxes?"

An accountant and Dana Barrett's neighbor who gets possessed by Vinz Clortho in the first film. In Ghostbusters II, he is forced to be the defense for Ghostbusters at their trial, then gets to be a temporary Ghostbuster.

One day, over thirty years after the Ghostbusters' heyday, the teen grandchildren of Egon Spengler move to Summerville, Oklahoma, which is struck by a wave of supernatural phenomenons. They find the Ghostbusters' old equipment and the Ecto-1 in a farm once owned by the late Egon and, together with friends, decide to put them to use against the supernatural entities, thus becoming the new Ghostbusters. 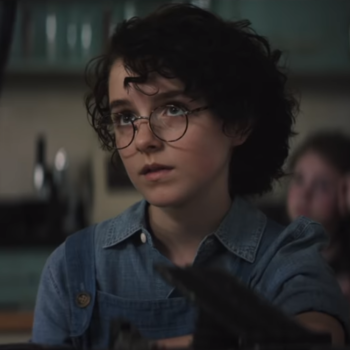 "My grandfather died. My mom says we’re just here to pick through the rubble of his life"

The granddaughter of Egon Spengler.

The grandson of Egon Spengler.