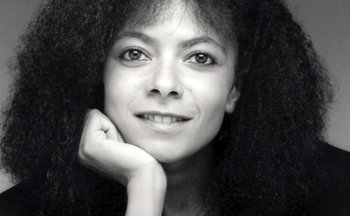 The French Woman of a Thousand Voices.
Advertisement:

Born February 7, 1954 in Pantin, Seine-Saint-Denis from a Togolese father and a French mother, she grew up to become one the busiest French voice actresses ever, numbering credits in the four digits range. Her voice is easily one of the most recognizable and beloved in the business. She's also had a career on stage and in small supporting roles on the silver screen and TV, but nowhere near her extensive dubbing activity.

She's known for dubbing a pretty sizeable number of African-American actresses, most famously Whoopi Goldberg (and the two of them met at least once

◊). Her male counterpart at that would be Thierry Desroses. Moreover, if you seek a French voice for a Mama Bear, a Sassy Black Woman, a female Badass Baritone or even a Cool Old Lady these days, she'll likely be on top of your list. Actresses she has regularly dubbed include Queen Latifah, Angela Bassett, Alfre Woodard, Pam Grier, Adina Porter, Viola Davis, Madonna, C.C.H. Pounder, Halle Berry, Michelle Pfeiffer, Beyoncé, Naomie Harris, Leslie Uggams and Annie Potts.

Animation-wise, she's best known as the French voice of Little Foot's mother in The Land Before Time, of Lois Griffin in Family Guy and of Francine Smith in American Dad!.

Some of her dubbing roles include: