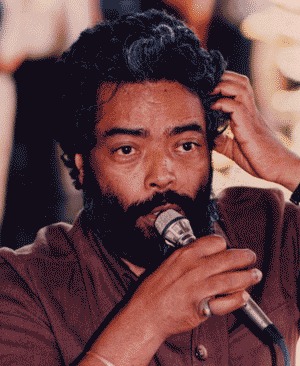 "Movie-making is a means of development for us in a way it is not for Europeans. Our historical level of development means we can't make films like Europeans. We can't afford it nor does it correspond to our way of thinking, our culture, or our historical moment. I can't conceive of a Star Wars or Apocalypse Now, but only films which correspond to the social reality I live in. That reality is that the wealthy Western world is murdering Third World people. The rich want to become richer. No humanism, no agreement, no brotherhood exists between the poor and the rich, the North and the South."
Advertisement:

Mohamed Abid Medoun "Med" Hondo was a Mauritanian film director, producer, screenwriter, actor and voice actor, who emigrated to France in 1959 and began to work in film during the 1960s.

His style is experimental, combining a variety of literary and documentary techniques to expose the racism, oppression and alienation faced by African and Arab immigrants in the post-colonial world. Not satisfied with Africa's seemingly underdeveloped cinematic catalogue, he wanted to demysitfy and challenge pre existing African and Hollywood traditions to raise consciousness on Third World cinema.