A list of the characters appearing in Lunarosse. Warning! The game has Loads and Loads of Characters!

Also, be warned against Spoilers.

The main protagonist. A brash and snarky man who's never at a loss for words, but who also possesses a strong sense of justice and ultimately wants to make the world a better place. At the beginning of the game, he's working for Bahrmuel's guild, accomplishing tasks in exchange of money. However, his life will take a unexpected turn when he escorts a diplomatic party supposed to negociate a peace treaty between the Lunarosse Empire and the Demi-Human Faction, and he will be involved in a ploy that will decide the fate of the world of Lunarosse itself.

Channing's best friend. More level-headed than him, Noel is always there to be the voice of reason when his friend gets carried away.

Channing's fiancée. Gloria is a fierce and independant woman, as well as an accomplished fighter.

The Prince of the Lunarosse Empire and brother of Empress Corlia. While he may appear as a mere figurehead to the people, Garrett is involved behind the scenes in the ploys that decide Lunarosse's fate.

A member of Bahrmuel's guild who's part of Channing's team. Carmen is an upbeat and energetic young woman, and also a true otaku.

A member of Bahrmuel's guild who's part of Channing's team. Esau is a calm and collected young man. He's an Archivist, meaning he can extract objects from any book he reads.

A member of Bahrmuel's guild who's known for his memory problems.

Officially, she owns a small restaurant in Sherwood Village that usually supplies food to the Bahrmuel Ranger Guild should they request it. A woman with an especially sharp mind, Joyce is also the Company's strategist and Apollo's mom.

A pair of Cheshire twins who enjoy playing tricks to unsuspecting travellers for their own amusement.

The leader of the Cheshire tribe.

An expert medic. Erika always has a way to heal most injuries and illnesses without so much as reading a book. With a single look at a patient she can tell what's wrong with them.

Nerida's bodyguard. This merboy is particularly distrustful of humans.

The princess of the merpeople. Her songs carry powerful magical powers.

A young stargazer. By following his charts, Icas can locate certain people or rare treasures. At first glance, he can be mistaken for a strong magician, but he's more of a sword fighter.

A feared pirate queen. Even though she is just that, a pirate, Sylvia acts as a defender of the merpeople should anyone wander into their waters with ill intent. She will not state why she cares so much for the sea dwellers, but it does have something to do with her troubled past.

A renown blacksmith who lost his wife and daughter in a shipwreck.

A strange teleporting girl. Sophia possesses the rare ability to teleport herself and others to locations she's familiar with.

A wannabe superhero who ends up briefly fighting Channing's team after they become traitors to the Lunarosse Empire. No one has ever seen the Tierkreis' true face, since he keeps it hidden behind a golden mask. Only his white hair is visible. He claims to be the true defender of the Churchill Region, using the power of the stars to his advantage.

A fortune teller and Tierkreis' mentor.

A red winged demi-human. Nalhir has always lived his life in hiding because of his appearance. Since the Churchill Region is low tolerant of his race, he has taken refuge in a cabin in the woods. Despite having wings, he can't seem to use them.

A voluptous Glyphmistress who has gained much fame in the Churchill Region and slowly around Lunarosse for her ridiculously sexy features and perky attitude. Also Jeane, from Suikoden.

The high priestess of the Oshiro Shrine. Himiko possesses the gift to speak and see spirits, even those people have dubbed "imaginary friends." People seek her out to obtain great wisdom.

A skilled ship captain. Channing and his friends seek her help several times when they need to sail somewhere.

An innkeeper of the main HQ. Angel provides shelter and food for the base before big missions, and is a very caring woman.

A Cheshire flower girl. Briea was hired by Mr. Hendrix of Sherwood Village to grow many flowers for him.

Mr. Hendrix's most prized possession. He escapes early in the story and it's up to the Bahrmuel Guild to locate him.

A shopkeeper of Sherwood Village. Being the youngest of four children, Beverly has made it her goal to be the best merchant the world has ever known.

A "world famous" chef, but he's not very good with people.

Garrett's best friend and spy, Philip provides information about the characters that have been unlocked.

A young couple about to get married.

The leader of a ranger guild based in Kankakee who's infamous for his bad temper.

A servant of one of Naumov Island's wealthiest people.

One of the two factions whose conflict is the driving force behind the game.
Empress Corlia del Lunarosse

The ruler of the Lunarosse Empire, Corlia lords over most of the known world. While she initially appears as a reasonable and fair ruler, the failure of the peace conference with Yliandra's Faction will quickly reveal that she's far from stable, and that she's hiding secrets about herself and Lunarosse.

Chief Advisor of the Lunarosse Empire. Though Zevahn looks like a jester, he is more serious than his appearance makes him out to be. Manipulative and mocking, he seems to delight in making everyone around him miserable.

One of Corlia's 'Grimoires'. Xanatos rules over the Sabatini Region in the name of his empress. Using his spells, Xanatos leads an unstoppable army of soldiers into battle. His loyalty to Corlia is unquestioned.

One of Corlia's 'Grimoires'. Vaarn rules over the Churchill Region in the name of his empress. Vaarn is a master swordsman and is known for his impenetrable armor. He's never seen without his helmet, leaving a more mysterious air about him. He's always the first to attack any who question Corlia.

One of Corlia's 'Grimoires'. Noita rules over the Izumo Region in the name of her empress. Noita is the rival of Xanatos when it comes to magic and despises Zevahn. Whereas Xanatos uses soldiers, Noita uses mirrors for her spells. She's the only general to have a known apprentice. Her actions are questionable, but her loyalty to Corlia is not to be questioned.

One of Corlia's 'Grimoires'. A mysterious black clad man. Wherever Gerard goes, death and destruction follow him in his wake. He seems to have a connection to Channing.

Noita's apprentice. A powerful mage and high-ranked official of the Lunarosse Empire, Abel is also a bigoted jerkass who hates demi-humans. His unpleasant personality quickly puts him at odds with Channing and his friends, even though they supposedly are on the same side. After the failure of the peace conference with Yliandra, he becomes an enemy of Channing's brigade. 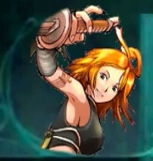 A greedy and cunning bounty huntress working for Bahrmuel's Guild, her unscrupulous methods quickly put her at odds with Channing, and she will become a recurring foe of his brigade.

One of the two factions whose conflict is the driving force behind the game.
Shamaness Yliandra

The leader of the Demi-Human Faction. Yliandra rules the White Sands, an eastern land independant from the Lunarosse Empire, and fights for the rights of all non-humans across the world. When the situation between the Faction and the Empire escalates into open war after the failure of the peace conference, Yliandra will show herself to be ready to do anything in order to defend her people.

The tactician of Yliandra's army. He never shows his face, nor does he reveal what he is. Bellahan is more calm than the other servants of Yliandra. Unlike Lujayn and Rasul, he's a powerful magic-user.

Yliandra's second-in-command. Lujayn is a manticore, and appears as a griffin-like creature in silver armor. Her blade has taken many lives, making her a feared opponent on the battlefield.

The bodyguard of Yliandra. While Lujayn may be the second-in-command, he's always by his ruler's side. Rasul takes the form of a shadow wolf with a venomous bite. He never leaves his mistress' side.

A dragon mascarading as a beautiful blond woman. Ajagara claims to be one of Lujayn's best fighters, but she overestimates greatly both her strength and her importance.

A wealthy businessman in the Sabatini Region. Escobar makes his living selling and trading pearls to the other regions. It was said his wife was killed in a shipwreck and he was one of the only survivors.

The true antagonist of the game, who only reveals himself in the Golden Path. An ambassador and ex-boyfriend of Yliandra, he supposedly got assasinated by Gerard, sparking the events of the story. It is later revealed that he deliberately sparked the war to change Corlia's story into something more exiting.

In the real world, he was Corlia's doctor/therapist at the asylum she was sent to. As they bonded over her storytelling, he fell in love with her. His love, however, was unreciprocated, and he hated the role he was assigned by Corlia, and he thought her story in general was crap. Feeling rejected, disappointed, and all-around hurt, he decided to take over Corlia’s story for himself.

The woman Channing's father is having an affair with. When the man tries to break up with her, she will reveal herself to be more possessive and more dangerous than she appears.

The head of the slave trade, Creid Maeus is a cunning and ruthless businessman.

A young Cheshire kid who quickly forms a bond with Apollo during the whole incident with the Cheshires. She's Sonia's daughter.

Carmen's mother. She lives in Sabatini.

An ally of Garett who's acting behind the scenes to free everyone from Lunarosse.

The queen of the merpeople.

Channing's father. His son doesn't consider him a good role model, to say the least.

The spirit that protects the Izumo Region.

A powerful goddes who comes to Channing's help in the true path.