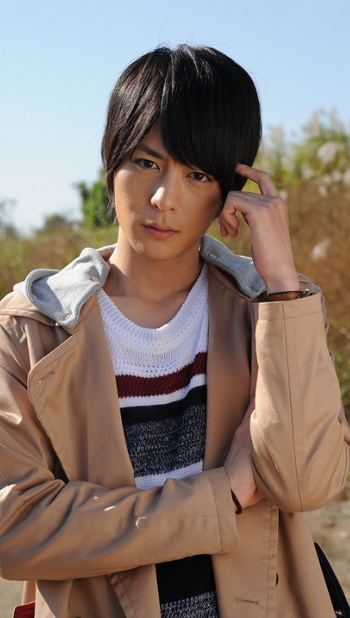 "I've found the winning formula!"
The main protagonist, Sento is a self-proclaimed handsome and brilliant theoretical physicist suffering from amnesia that made him forget the last 20 years of his life. He transforms into Kamen Rider Build in order to fight the Smash and learn the truth about himself. His genius mind enables him to create Build and Cross-Z's equipment.

His actual identity is the "Devil's Scientist" Takumi Katsuragi, who had his face swapped with that of the guitarist Taro Satou, who was killed in place of him one year ago. After the face swap, Soichi Isurugi removed Katsuragi's memories and placed him under Faust's Nebula Gas experimentation. Then, Soichi took him and provided Sento with the Build Driver so that he could manipulate him into completing his own work.

Tropes exclusive to him as Kamen Rider Build:

Are you Ready? Hagane no Moonsault!note Steel Moonsault! RabbitTank! Yeahhh! 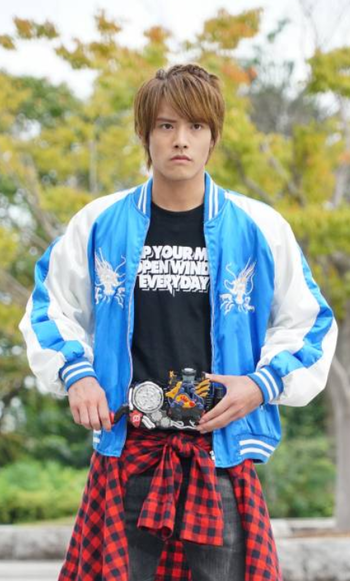 "I feel like there's no way I can lose!"
A former prize fighter disqualified for cheating, later convicted of murdering Takumi Katsuragi, a scientist investigating the Pandora Box. Like Sento, he was experimented on, but managed to escape and now takes refuge with Sento. He accompanies Sento to investigate the mystery behind Katsuragi's murder, arguing all the way.

Using the Cross-Z Dragon as an add-on for the Build Driver, he transforms into Kamen Rider Cross-Z. Using the Dragon Sclashjelly in the Sclash Driver, he can instead transform into Kamen Rider Cross-Z Charge. Later, he upgrades his basic Cross-Z form into Cross-Z Magma, using the Cross-Z Magma Knuckle in conjunction with the Dragon Magma Fullbottle.

Are you Ready? Wake up Burning! Get CROSS-Z DRAGON! Yeah!
Click here to see Cross-Z Charge 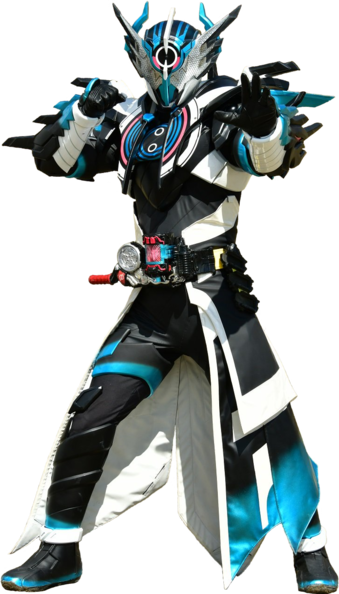 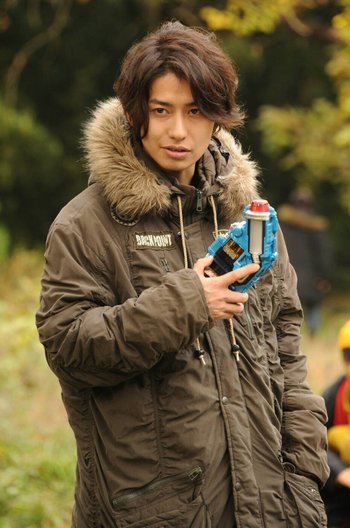 "I'll crush you with the fire burning in my heart!"

Hokuto’s first Kamen Rider as a result of the leader’s alliance with Blood Stalk, who gave them a Sclash Driver and the means to make the Robot Sclashjelly. He's a government-funded assassin. Later sides with the nascita crew to fight Seito when they invade his homeland.

Tropes exclusive to him as Kamen Rider Grease 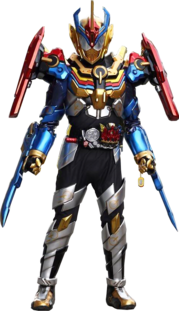 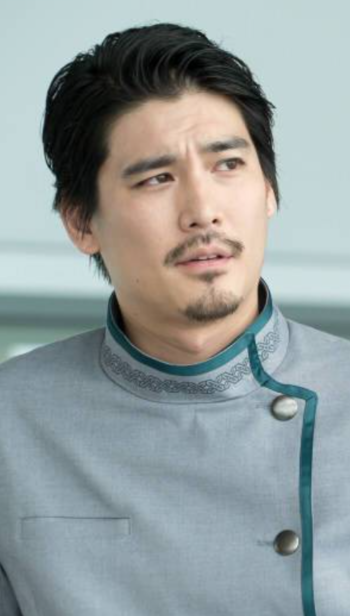 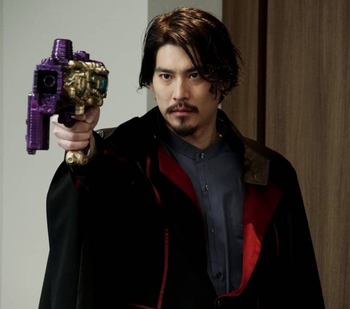 Gentoku during his time at Seito 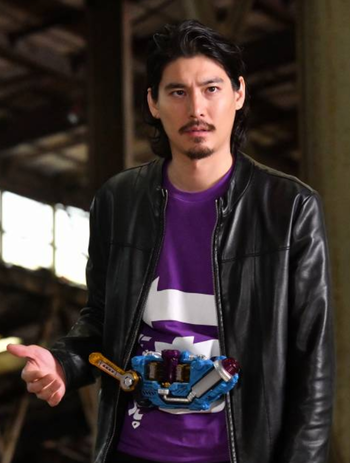 Gentoku after his Heel–Face Turn
"I will sacrifice you for the greater good!"
The head of the Touto Institute of Advanced Matter Physics as well as an aide and son to the Prime Minister of Touto, Gentoku oversees the research on the Pandora's Box. Was present at the Skywall Tragedy 10 years ago, and thus was also affected by its energies, increasing his aggression.

He is the true identity of Night Rogue, one of the creators of Faust. After being expelled from Touto, he becomes a servant of Seito, using the Crocodile Crack Bottle with the Sclash Driver to transform into Kamen Rider Rogue.

Tropes exclusive to him as Kamen Rider Rogue 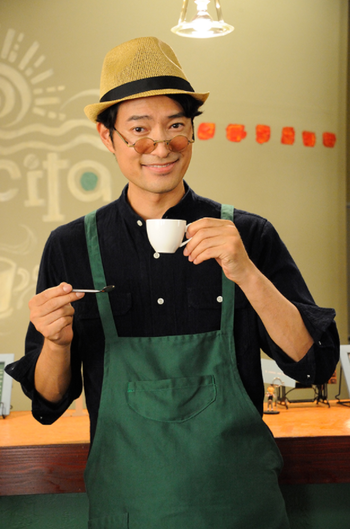 The owner of nascita, the cafe where Sento and co. hide their base of operations. He helps out with occasional surveillance and generally acts as the Team Mom, offering his wise insight.

Prior to the show's events, Soichi was the astronaut who found Pandora Box on Mars 10 years ago and was subsequently possessed by the being known as Evolto. During the unveiling ceremony, Evolto touched the Box, attempting to destroy Earth as he had Mars but ended up initiating the Sky Wall Incident instead. Nine years later, he saved Misora from Faust, at which time he also stole a Pandora's Box panel, the Build Driver, and a number of Fullbottles. Soon after, Soichi encountered an amnesiac Sento in an alleyway and brought him in, encouraging him to use the Driver to become Kamen Rider Build. All of this was part of his schemes as Blood Stalk, using Sento and Misora to gather all twenty Fullbottles as well as Pandora's Box and both panels for himself. He continues to play a role that alternates in equal parts between mentor and antagonist, raising Sento and Banjo's Hazard Levels in pursuit of his goals: the ultimate vessel and the ultimate Driver. Soon after completing Banjo's growth, Evolto gains the Evol Driver and Evolbottles to transform into Kamen Rider Evol.

For tropes pertaining to when Evolto's not pretending to be Soichi, see his entry under Blood Stalk. 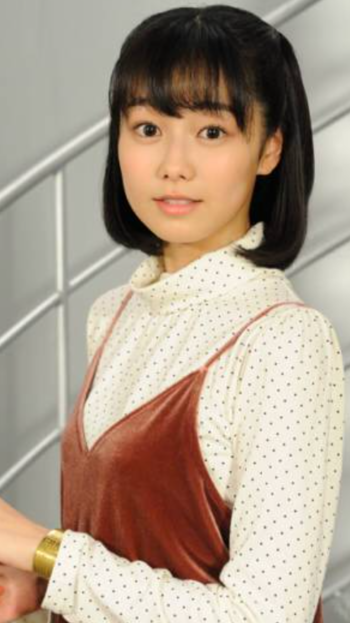 Soichi's daughter, who has a mysterious power that purifies Smash essences. She almost never leaves the lab in nascita's basement, but in her spare time she makes web videos under the name "Mii-tan" and occasionally calls on her viewers to send in tips to aid Build.

It was revealed that Misora gained the power to purify Smash essences in the wake of the Sky Wall Incident ten years ago, and consequently, fell into a coma for seven years. Prior to the series, she was captured by Faust for her powers, but her father saved her... except that was a lie. Misora found out what the Fullbottles were for and couldn't bring herself to make them anymore. Since her mental state is necessary to the process, Soichi engineered her "escape" as well as finding a "hero" to be Build. She would believe that she was helping for a good cause, and thus could resume bottle purification. 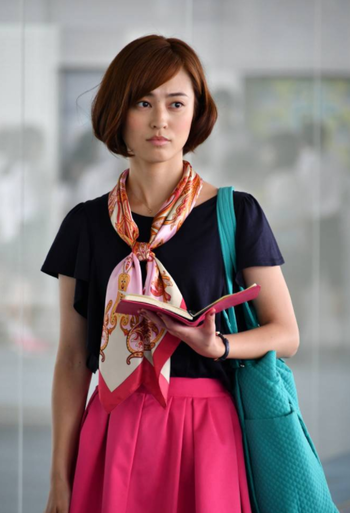 A freelance reporter working in Touto, she seeks to uncover the mysteries behind the Smash and their foe, Kamen Rider Build. She's soon revealed to be much more than just a reporter, however: she's a spy for Namba Heavy Industries, the core financial backer of Faust. After her cover is blown by Misora, she's turned into the Stretch Smash and pulls a Heel–Face Turn afterwards, joining Sento's gang in order to fight the Namba Industries... or so we led to believe. In fact, she's one of the Namba Children, and always struggling to leave the organization after socializing with Sento and co.
Advertisement:

The Queen of Mars who resides inside Misora's bracelet. 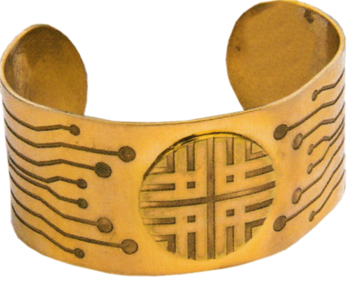