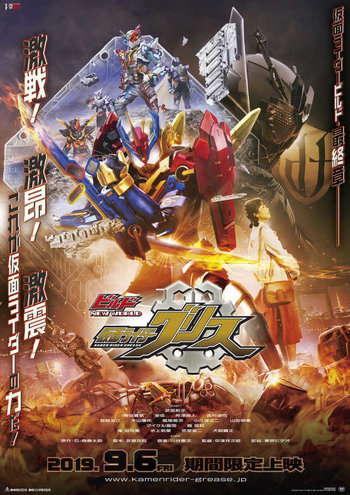 Sometime after the incident involving Killbas, Kazumi was asked to accompany Misora, which caused an overreacting response from Kazumi with his delusion in Misora's new Nascita site of working by van. As Kazumi accepted, Kazumi wore a tuxedo on the next day and accompanying Misora for shopping until night. At night before Misora left Kazumi, Kazumi gave Misora a present which contained Misora's suit from the old world as a net idol. It disgusted Misora and she rejected Kazumi when he confessed his feelings, especially since Kazumi had misinterpreted accompanying with 'dating' (in Japan, 'tsukiate' commonly means as accompanying, but also means 'dating' in romance term). This frustated Kazumi and the Hokuto Three Crows group came to cheer him up Kazumi came up with the conclusion to go sailing together and they sailed without any proper direction with a rubbery boat and got lost on an unknown island.

Days after that, Taizan had a meeting with Simon Marcus, a deputy officer of the United Nations with Gentoku was with Taizan as the translator due to Simon speaking in English. They talked about the security means for the future should there be the next threat like Killbas, especially the current new terrorist group which is called Down Fall. Taizan and Gentoku led Simon to the lab, introducing Guardians while on the way and the latter the Build Driver which was created by Shinobu Katsuragi. However, none of them realized that Guardians were hijacked on their way to the lab after their introduction. Soon after the introduction of Build Driver, the groups were ambushed by the Down Fall. Gentoku, Taizan, and Shinobu were shocked that Guardians were also working with the Down Fall, noticing that they were hacked. Simon Marcus calmly introduces himself as the leader of the Down Fall group and they wanted to take over the facility in Japan so Down Fall will rule the world. Gentoku transformed into Kamen Rider Rogue to fight, not before he dialed a phone call and set it into loudspeaker mode and easily overpowered the Guardians. However, Simon transformed into a Phantom Crusher and made a surprise attack on Gentoku, damaging him badly with the heavy power shot and made him fell onto the escalator. Simon stepped on Gentoku and used a mysterious bottle to absorb Gentoku's Nebula Gas, forcing him to de-morph much to his dismay.

Later, one of the group asked Shinobu if he remembered his voice. Shinobu recognized that man to be Keiji Uraga, the man who had worked alongside him in the previous world and was victimized, becoming the Zebra Lost Smash. Keiji introduced the Phantom Crusher as one of his new inventions, created with Phantom Liquid which existed on a certain spot because of the New World's fusion progress. Shinobu warned Keiji that his other son (referring to Sento) would stop him, but Keiji smirked and told that he had everything under control.

During the invasion, Sento and Ryuga were visited by Nariaki Utsumi in their lair. He demanded Sento to raise his Hazard Level as he had learned about the truth of his past, but was inconvenient as he had no memory of it. Sento and Ryuga warned Nariaki that it would be a futile effort, but let Nariaki enter the Nebula Gas capsule to raise his Hazard level. While they were raising Nariaki's Hazard Level, they were ambushed by the Down Fall. Sento and Ryuga proceed to transform, but before they were able to do so their Nebula Gas were absorbed, leaving them with the same problem as Gentoku. The group then stole the White Pandora panel from Sento's lair. On the same time, Kazumi and company had just managed to return to Japan by swimming from the lost island. Kiba smelled trouble and the group went to their farm, discovering that their friends were attacked. The Down Fall showed themselves, transformed into Phantom Crushers, and absorbed Kazumi and co's Nebula Gas, but they were still able to transform much to the group's shock. When the group's leader asked in English of how Grease and his co were able to transform, Kazumi replied that they didn't know what the terrorist's meant, also adding that they were in Japan. Kazumi and co proceeded to meet with Sento to learn more while the terrorist group informed Keiji about Kazumi's ability.

However when they met Sento, they learned that the group had absorbed their power. Sento was shocked of why Kazumi able to transform which got a joke replied by Kazumi that it was a 'power of love', but Kazumi broke the joke off immediately as he told Sento that he got rejected bluntly by Misora. Akaba told Sento that during their lost day, they took a bath in a weird hot spring and it suddenly burst out, leaving Sento to also feel the information to be stupid. Soon, Sento received a call from Sawa that she was told that Gentoku was under attack and informed Sento about Down Fall and about Phantom Liquid. Sento realized of what Akaba said could be a clue to help them transform again and the next target of Down Fall to be Misora despite Down Fall not knowing that Misora had Vernage no longer. The Three Hokuto Crows proceed to save Misora immediately and Sento gave Kazumi the location of where Misora lives. But Kazumi refused to help due his heart being broken, much to the dismay of Kazumi's team. In the meantime, Keiji had killed his underling for bringing the fake White Pandora panel and chained Gentoku in a basement.

Misora was soon attacked in her van by Keiji and co, but the Hokuto group came to help Misora while Kazumi was realized that he got tricked by Sento to the Lighthouse instead. The Hokuto group easily defeated the Phantom Crusher, but Keiji transformed into Metal Build and finished them off immediately. Kazumi arrived to help in the nick of time and told the group on how dare they took the fun without him after he lamented about how stupid he was. But when Grease fought Metal Build, he was also overpowered with ease. Keiji soon took Misora and demanded Kazumi to meet him in the Prime Minister building and bring White Pandora Panel. After coming to the Prime Minister’s office, Keiji killed Simon Marcus by a gunshot as he had no need of him and claimed that the one to rule the world would be him. Feeling victorious, Keiji announced to the citizens that he had taken over Japan.

When the Hokuto trio and Kazumi were fighting, Sento and Ryuga met Takumi Katsuragi. Sento asked for his help to take their power back and about the Phantom Liquid. Takumi was more than pleased to help and they soon learned that the hotspring spot where Kazumi and his friends were taking a bath is the Phantom Liquid spot as the result of that area was the radiating rail line for the fusion process during the creation of the New World. Sawa came to them and informed that Akaba, Aoba, and Kiba were revealed to suffer worse damage than Kazumi and Kazumi blamed himself to not do better to save them. Sento and Takumi created three bottles of Phantom liquid by extracting them from the Hokuto three crows, but they realized that only by regaining their power, it won't be enough to face the Down Fall and they must choose one person to be powered up as they didn't have enough time to empower the others, Kazumi came and told them to power up him instead as he was the only one left who able to fight. Sento gave Kazumi a power up item, but Sento told that it was yet completed and it would need to drain the power from the Hokuto crows at the cost of their lives. Kazumi bluntly refused the power up and called the fight off, going home. But while Sento was greatly disappointed, the trio told Sento how badly Kazumi lied.

Kazumi was revealed to went to the Prime Minister’s building and showed Keiji that had the White Pandora Panel. Kazumi challenged Keiji and transformed into Grease Blizzard, much to the shock of Misora as Grease Blizzard was the form which had killed Kazumi before. However, due to the current body of Kazumi, he withstood the power of Grease Blizzard perfectly and destroyed the bunch of Phantom Crushers in ease. Keiji was infuriated with Kazumi and faced him off as Metal Build, but Kazumi overpowered Keiji in no sweat. When Kazumi stated that Keiji would never beat him, Keiji used an underhanded method to call a hidden Phantom Crusher and it attacked Kazumi from behind in full force flying tackle. Kazumi called the attack to be cheated with Keiji stated that in war, everything is legal. The tackle had forced Kazumi to drop the White panel and Keiji took it, merging the panel with himself and fused a Phantom Crusher with him by force, turning him into Phantom Build. Kazumi called the form just a little adjustment, underestimating the power of the white panel and got easily defeated by Keiji. When Kazumi got thrown outside, Ryuga came to Kazumi with the Perfect Kingdom adapter and a Grease Perfect Fullbottle. Kazumi asked on what happened to his friends and Ryuga replied only by giving Kazumi their dog tags, making Kazumi mourned their deaths. Kazumi got up again and transformed with Ryuga. Sento on the other hand just released Nariaki and asked for an apology that he forgot about him. Gentoku received the Phantom liquid from Sawa and the Build Driver to fight again. As Kazumi was transforming with Ryuga, the others were also transformed in their respective different locations into their strongest forms, Build Genius, Cross-Z Magma, Mad Rogue, and Prime Rogue. Ryuga told Kazumi to take on Keiji while he took care of the rest and rescued Misora.

When Kazumi faced off against Keiji, he was still underwhelmed and Keiji mocked Kazumi that he deserved to be a weakling as he gained power by depending on the weaklings while Keiji gained power by depending on himself. The provocation made Kazumi mad and he managed to utilize the full power of the Perfect Kingdom, shocking Keiji and finally gained the upper hand to defeat Keiji with ease. Keiji in frustation asked of why Kazumi could become so strong with the latter replied that Keiji had nothing to fight for, while Kazumi has it. Keiji died as he disintergrated into a pile of particle dusts. After the fight, Kazumi was encountered by Misora to thank him for rescuing her. But Kazumi said that he didn't deserve the thanks while lamenting of his friends' deaths, not long when he heard their voices. Kazumi was suddenly shocked when his friends arrived, still alive and in fact much more energized than usual from the effect of giving their power to Perfect Kingdom. The news relieved Kazumi and he shouted of how dare Sento and Ryuga fooled him. Sento smiled in his lair and had talked with Sawa and Gentoku. Sento asked Gentoku of why he contacted Sawa instead of him during the trouble while Ryuga asked of why Gentoku had his beard no longer. Gentoku replied them that Sawa told him to shave and they had been dating, showing their matching T-Shirts.

On the next day, Misora asked him to accompany her. And just like that morning, Misora asked him again, but Misora seriously asked Kazumi to go on a real date, much to Kazumi's shock in happiness as his dream had finally come true.

The tropes are following: