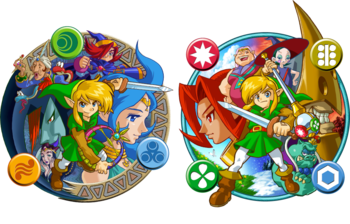 Play Both for the Ultimate Adventure!
"I'm sorry I made you worry...But I saw it. A world filled with sorrow and despair...withering away!"
—Princess Zelda
Advertisement:

The seventh and eighth games in The Legend of Zelda series were developed by Capcom and released at the same time on the Game Boy Color in 2001. Oracle of Seasons and Oracle of Ages are the first portable Zelda games since Link's Awakening, and use similar graphics and gameplay styles.

Each Oracle game starts with Link being called to a new land by the Triforce. In Seasons he is called to the land of Holodrum, where he witnesses a dancer called Din get kidnapped by the Black Knight Onox, who then sinks the Temple of Seasons into the earth, throwing the seasons of the world into chaos. In Ages Link is sent to Labrynna, where the singer Nayru is possessed by the Evil Sorceress Veran, who uses her powers to travel back in time and manipulate the queen of Labrynna in that time into building an Evil Tower of Ominousness. Link discovers that Din is the Oracle of Seasons and Nayru the Oracle of Ages, and uncovers hints that their capture and the plans of Onox and Veran are just separate parts of a larger, more sinister plot.

To aid him in his quest, Link receives a signature item in each game. In Seasons he receives the Rod of Seasons, which cycles the seasons through spring, summer, autumn and winter when swung, changing the landscape drastically and allowing him to travel through the land differently. In Ages he receives the Harp of Ages, which allows him to travel back and forth through time, changing the past to change the future and bringing items from one time period into the other. Other new gameplay features include magic rings Link can wear for various benefits, and the ability to call on one of three animal companions to navigate unfriendly terrain and fight enemies. Each game also has slightly different items for Link to use - in Ages the Power Bracelet upgrades into the Power Glove, while in Seasons Link instead trades in the Roc's Feather for the Roc's Cape.

The true story of the two games is revealed via a "linked game" — the player finishes one game, they receive a password they can input when they begin a new game in the other game. This password triggers new plot developments and storylines to be introduced, revealing it was more than just one evil plan set in motion and to truly save the day Link must go to the other land to save them there.

Capcom would later assist in Four Swords and The Minish Cap.

Chronologically, the two Oracle games take place in the "Hero is Defeated" timeline after A Link to the Past, and either after or immediately before Link's Awakening.