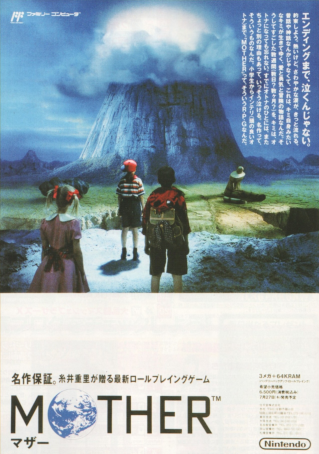 Try not to cry - at least until the end!

Take a melody
Simple as can be
Give it some words and
Sweet harmony
Raise your voices
All day long now, love grows strong now,
Sing a melody of
Love, oh love
Advertisement:

In the late 1980s, Shigesato Itoi got a hold of Dragon Quest, the first video game he ever played. Though he definitely enjoyed the game, as a former famous copywriter,note Yes, he rose to fame by writing ad copy. Only in Japan... he couldn't help but be intrigued about the game's use of the unconventional medium to tell a story and say to himself, "I could do better". Several meetings with people from Nintendo and a John Lennon-inspired name later, that's exactly what he did.

The game is a 1989 Famicom Eastern RPG, the first installment of the Mother trilogy, and the predecessor to the significantly more famous (outside of Japan, at least) EarthBound and Mother 3. Set in the year 1988 (or "198X" in the eShop description), the story follows Ninten, a normal American boy. He's got a workaholic dad, a loving mom, twin kid sisters, and a pet dog. Everything is pretty normal and everyone is happy, up until the day his desk lamp suddenly attacks him, another lamp attacks one of his sisters and a doll starts attacking his other sister. Calling his dad after settling this, Ninten learns that psychic powers run in the family, and to learn more about it, he has to get his great-grandfather's diary and discover what happened many years ago, including what happened to his great-grandmother Maria. Meanwhile, other strange phenomena are happening across the country, and it soon becomes apparent that an alien force is at work. Just what connection does Ninten's family have with the alien invasion?

While always known as Mother in Japanese, the English version had a troubled history. It was initially planned to be released in North America as Earth Bound, but Nintendo of America scrapped release plans after finishing work on the English localization (the Super Nintendo had already launched, making it Nintendo's major focus). A copy of the localized cartridge surfaced years later in the hands of a collector, the ROM of which was subsequently leaked on the Internet and became known as Earthbound Zero after modifying it to run on the widely used NES emulator of the day, as well as adding "Zero" to the title screen to distinguish it from its sequel. On April 29th, 2011, a polished fan-retranslation intended for Mother 1+2 was finished; however, on June 14th, 2015, the unaltered Earth Bound localization was finally released as EarthBound Beginnings for the Wii U Virtual Console in North America and Europe. This localization was also released in Nintendo Switch Online in February 9, 2022.

No crying until the end.
Feedback