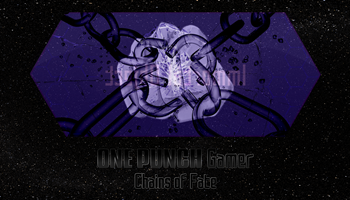 Because he could see the Chains, countless tiny chains made not of metal but of something Beyond, surrounding his fist and creeping up his entire arm before stretching into the Infinity, out of his view, out of Reality itself, stopping him dead in his tracks...
"I'm just...a Gamer playing as a Hero for...fun"
—Kirito
Advertisement:

One Punch-Gamer is a Crossover between Sword Art Online and One-Punch Man by SaintInfernalNeos.

Kirigaya Kazuto/Kirito and his little sister Suguha happen to notice One-Punch Man on the TV, and enjoy watching it together. They're talking and interacting more than they have in years, and nothing can go wrong now...

...Except that Sword Art Online launches. Which, by choice of Fate, mysteriously glitches, giving Kirito the powers and garb of Saitama himself.

Cue Kayaba freaking out and Taking A Level In Jerkass, Asuna declaring Kirito her "Sensei", Suguha starting to run around in a bicycle fighting crime, the death game causing about half as many casualties, and Kirito wishing for a challenge, already!

Kirito also somehow ends up with a Harem. No idea how. Well, he saved half of their lives, and is probably the most famous heroic player of Aincrad, and...You get the picture.

The Sequel, One Punch Gamer: Chains of Fate began with its first chapter posted on August 27th, 2017. It can be read here

An Interquel, One Punch Gamer: UHA Chronicles began with its first chapter posted on January 21st, 2018. It can be read here

One Punch-Gamer provides examples of: