The crew the Oneders sail with for most of Chapters 1 through 4. A Ragtag Bunch of Misfits with plenty of Teeth-Clenched Teamwork abound, but the crew manages to get things done.

The Crew as a whole provides examples of:

Initially the creepy, ancient-looking chef and server of the Voltun. She's taken a shine to the player characters, often giving them food and challenging them to discover her secret ingredients. Currently official cook of the Yeldin.
Eloy, ever so cheerfully: Onslow, you know there's nowhere to hide! She's everywhere!
(Zito-as-Onslow further grimaces in utter fear.) 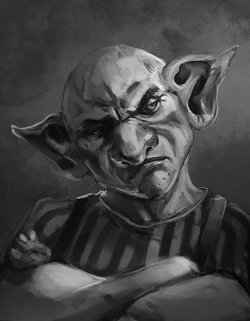 "Do you have leads? DO YOU HAVE LEADS!?"

A perpetually angry goblin first encountered by the team aboard the Voltun in Episode 1. He butts heads often with the player characters, and seems to be hiding some sort of secret. 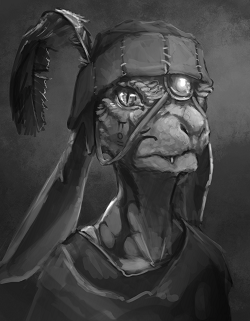 A kobold of faith encountered by the team aboard the Voltun in Episode 1. He's one of the nicest people in the group, and seems to like just about everyone. He's also an interdimensional alien with ambitions of the cosmic variety. Served as physician on the Yeldin. 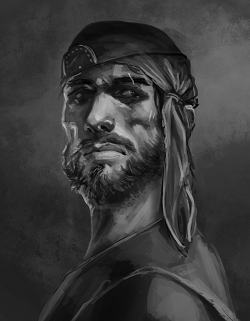 "I dunno, Cap'n. Did you try pulling up the Anchor?"

A pirate first encountered by the team as security on the Voltun in Episode 1. He's ex-navy, but little else is known about him. Served as the helmsman on the Yeldin. 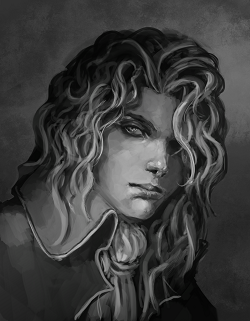 "My work is to be held to the utmost secrecy. Got it?"

A human spy with magical abilities. She's on the run from the Navy, and is carrying documents that she's willing to protect with her life. Served as Quartermaster on the Yeldin. We learn more about her in Chapter 2, as she's revealed to be a member of a controversial Vampire Hunting clan known as the Volition.

In Chapter 3, Redd leaves the crew as she's more tied to the Volition's activity than she is to the Oneders. 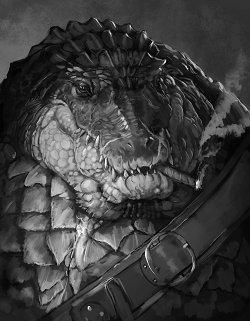 "I ain't ever killed one of you before, son."

A rotund alligator-lizardfolk Gunslinger with a well-earned reputation as an expert hunter. Served as gunnery chief on the Yeldin. 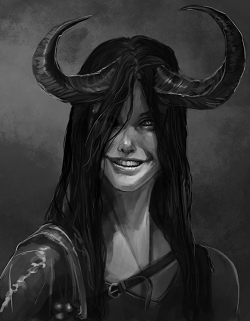 "Are we fighting now?"

A 9-foot tall Tiefling Barbarian who stood as the champion of the fighting pit at the boardwalk. She loves a good fight more than anything, and is incredibly friendly underneath her fierce exterior. Was adopted as Wake's apprentice, and served as chief security on the Yeldin.

After a tough loss and Heroic BSoD, Wake convinces her to find a cause to fight for, and she is now classed as a Fighter, who will begin taking Monk levels as she levels up. 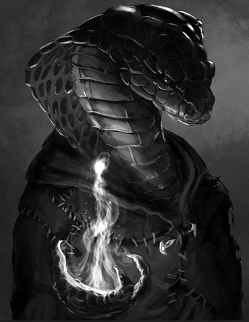 A Yuan-Ti Abomination warlock who was captured by Skrung, Risf, "Redd", and Pliskin after they discovered her stalking them. She served as navigator for the Yeldin while she and the rest of her crew went looking for The Heart of the Collective One, a god of the Yuan-Ti.

Once the crew safely retrieved and returned it to it's proper place of rest, she left the crew to be it's acolyte. 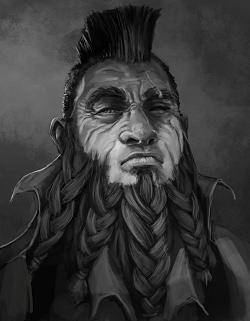 A dwarf that gambled with Wake in Episode 2. He lost horribly. Now serves as shipwright and Alchemist of the Yeldin. Died in Chapter 3 from the Yeldin being dropped by a giant, possibly while he was having a seizure. 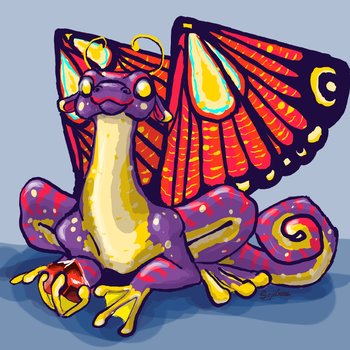 Art by @SageGreenKat on Twitter.
A cat-sized dragon from the Feywilds that was bothering the Purple Worm in the Bulkard Zoo. The crew decides to take it with them as their pet after it shows itself to be both harmless and adorable.
The Deram's Folly Crew
In Chapter 3, the Oneders join the Adventurer's guild, which means everyone in the previous Yeldin Crew has to fill out the paper work to join and were Put on a Bus as the Yeldin went to it's final fate. To ease this, Ezra could hire eight people to fill various roles on their new ship, the Deram's Folly.

The Crew as a whole provides examples of:

A large hobgoblin who works a crêperie in Rite. He's recruited by Ezra in Chapter 3 (With Grammy's blessing) to join the crew as the new cook.

A grey elf surgeon with a zealot-like fervor in serving the god of death and pain. She's unquestionably good at her job, but her bedside manner is...unconventional. Ezra recruits her to be the surgeon.

A sea-elf who speaks indirectly to the god of knowledge; Lazameth. Ezra hires her as the ship's Navigator.

An Eladrin Boatswain that Wake bumps into outside the guild. She's an excitable girl who wants to enjoy the life of adventure she's put out for herself. Ezra recruits her to be the new Boatswain.

Tropes that apply to all characters

A chest-shaped Mimic the group finds in Yeldin Cave. It doesn't have a name, but Ezra gave him the nickname "Trunky" and it stuck despite its protests.

A scabbard-shaped Mimic that used to belong to Yeldin. The group finds it much more reaonable than Trunky.

Another chest-shaped Mimic the group finds in a locked room in Yeldin Cave. It was created specifically to dispose of corpses.

A ring-shaped Mimic that was inside Trunky. It eats finger bones to create skeleton keys, but only one at a time.
Former Mimic Crew - SPOILERS

The enigmatic and all but declared dead captain of the "Mimic crew", and said to have sailed a Mimic ship. Revealed to in fact BE the mimic ship, and be resting inside a cave of shipwrecks on the southern isles deep within the abandoned Mind Flayer base. The crew frees him, and for most of Chapters 1 and 2 serves as their ship.

Sadly, after Gulfurr's death, Yeldin's soul left the ship and it had to be scuttled lest it become a danger to those around it.

A warforged whose only goal in life is to cook meals. He is very serious about it.

A Crested Wood Duck-Aaracocra summoner and published author. He can be hired as either an Arcanist or a Helmsman.

A redscale Dragonborn who works as a photographer and as a fighter for the Adventuring Guild.

A Nudibranch-Merfolk War Mage who is well known in Rite...But not for the right reasons.

An enormous orc carpenter who the crew encounters at a specialty shop. Like nearly everyone else on the island, he works at the Adventuring Guild, and is for hire.