The world of Eos is vast, with creatures from all sizes and power levels roaming the earth. This page details those creatures.

"Titan, the Archaean, steadfast as stone.
Ramuh, the Fulgurian, sharp as lightning.
Shiva, the Glacian, gentle as snow.
Leviathan, the Hydraean, relentless as tides.
Bahamut, the Draconian, unbending as iron.
Ifrit, the Infernian, fickle as fire.
Since time immemorial, they have watched over Eos."
—Cosmogony

The physical manifestations of the stars, the Astrals are ancient and powerful beings that protect Eos from the harmful activities of humanity. They are intelligent and possess a language of their own that can only be understood by a select few. Integral to the lore of Eos and indifferent to human affairs, their behavior cannot be fully understood due to their thought pattern being beyond mankind's comprehension. 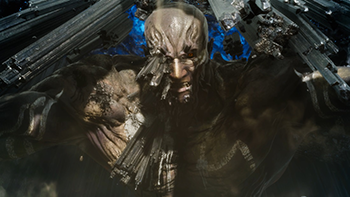 The Astral representing Earth, holding up the Meteor at the Disc of Cauthess. He tries communicating with Noctis so he can face his challenge and claim his power before the Empire kills him. 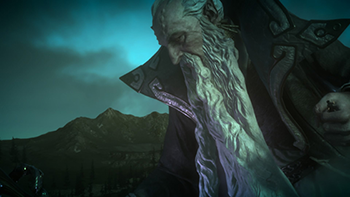 The Astral representing lightning and the storms, he protects the Duscae region via three runestones.

"O King of Kings, restore the Light unto this world." 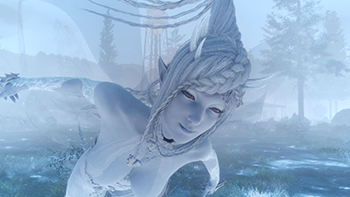 The Astral representing ice, a defender and friend of humanity. Unfortunately before the game even started, she was killed by Niflheim's powerful army leaving only a giant, icy corpse. ...Or did they?

"This wretched pile of bone and flesh, ignorant of that which governs All, comes to requisition the might of a Goddess?" 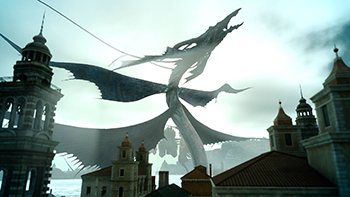 The Astral representing the water element and Goddess of the ocean, the gargantuan sea serpent Leviathan is temperamental and thoroughly dismissive of humanity. Forming a covenant with her is no easy task due to her haughty nature. 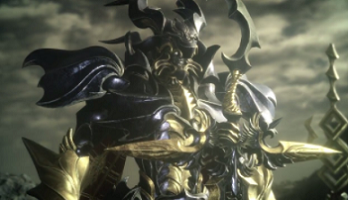 The God of War, Bahamut is the most mysterious and powerful of the Astrals; virtually nothing is known about him. What is known is that he's similar to Shiva in that he largely watches over and protects humanity, in his own alien way. 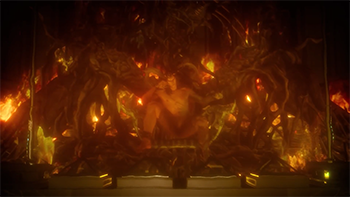 The Astral of fire. Not a very nice guy to say the least. He outright detests humanity and wishes nothing more than their destruction. More than once has he picked fights with Bahamut and Shiva over this.

Nocturnal monsters that plague the land of Eos, daemons were once humans and animals that were parasitized by the Starscourge and warped beyond recognition. They have been growing in numbers by XV's setting as a result of the increasing length of the nights. 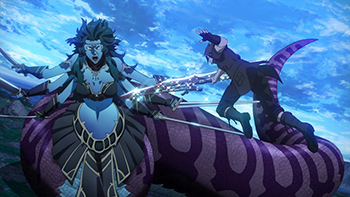 A snake-like creature with a woman's torso and six arms. One such Daemon managed to attack and injure Noctis during his childhood, as seen in Brotherhood: Final Fantasy XV. 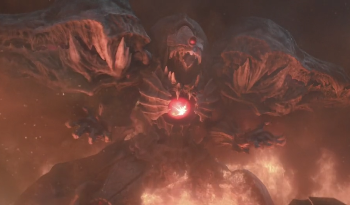 Towering beasts deployed by Niflheim as siege machines capable of razing an entire city and crushing the morale of their enemies. They appear prominently in Kingsglaive, but are simply referred to as "Daemons" before being named in Episode Prompto. 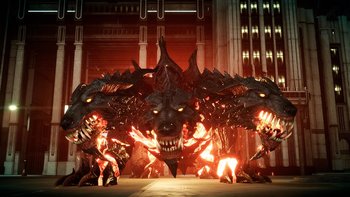 Huge, three-headed hounds that are generally seen as a step above even enemy Behemoths. One of them is seen enforcing Niflheim's assault forces during Kingsglaive's opening battle.

A powerful Daemon roaming Fort Vaullerey. Naglfar is fought as a level 120 superboss during the "Wondrous Weapon" sidequest. 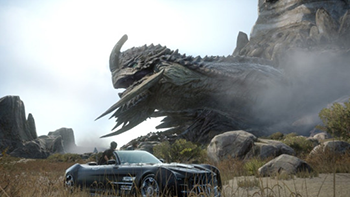 A massive creature said to have lived for millions of years, the Adamantoise disturbs the vicinity of Leide by creating tremors just from its movements. It is encountered as a level 99 superboss after completing the main story and undertaking the quest "Let Sleeping Mountains Lie". 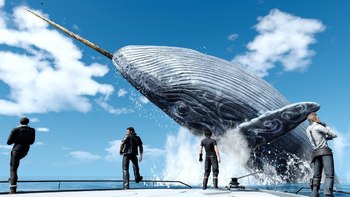 A gargantuan whale-like creature worshipped as a deity by the fishermen of Altissia, who pray to him for a bountiful haul. 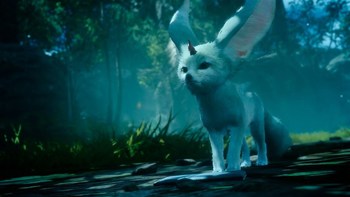 "Don't be afraid! I'll protect you through your darkest dreams!"

Young Noctis's guide through the world of his dreams in the Platinum Demo. They came from a charm given to him by King Regis, and can be obtained as a usable summon in the full game's easy mode upon completion of the demo. 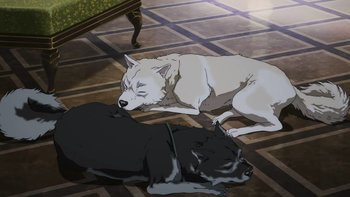 A pair of dogs who serve as liaisons between Luna and Noctis. 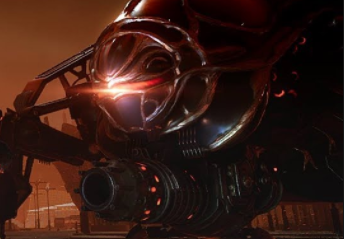 A warmech associated with the ancient civilization of Solheim. It appears in the Royal Edition as an optional Level 119 superboss in the Insomnia Ruins. 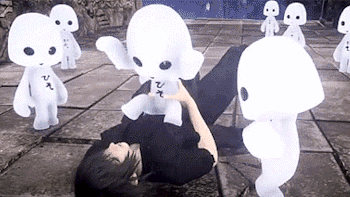 Strange, inexplicable little aliens - ALIENS! - who have summoned Noctis and Sarah to their world to save it from an evil entity known as The Eroder in the "Chosen Girl, Eroded World" crossover event. Even though they're technically arsenic-based, they're not actually poisonous to be around and are quite friendly and playful!

Created by Hironobu Sakaguchi as the official mascot for Mistwalker, they have appeared in various forms throughout the Terra game series. 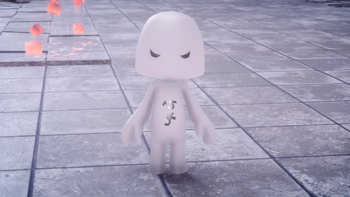 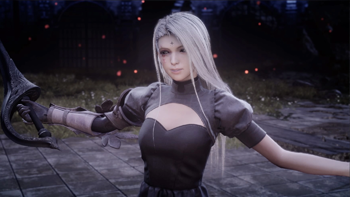 A mysterious, shapeshifting entity that has plagued the world of the Hiso Aliens to a point where almost none of it - and them - are left. To stop it, the Hiso Aliens summoned Noctis and Sarah to defeat it. Though that may work out to its advantage...

A race of beastmen from the realm of Eorzea. Hailing from Coerthas highlands, these bird-like beastmen have somehow appeared on Eos, where they have begun using Meteorshards to summon their patron deity, the violent and malevolent Garuda.

Garuda, Lady of the Vortex 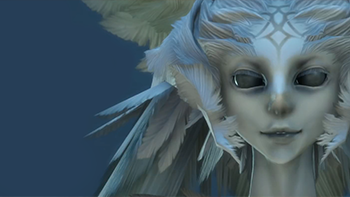 Wretched insects of this alien world, rejoice and fall to your knees in supplication!

The boss of "Adventurer from Another World", a crossover event with Final Fantasy XIV. Also known as the Lady of the Vortex, Garuda is the primal god of the Ixal beastmen tribe of Eorzea, feared by many for her violent nature and the joy she derives from committing wholesale slaughter.

The Messenger / Garuda, Emissary of the Winds 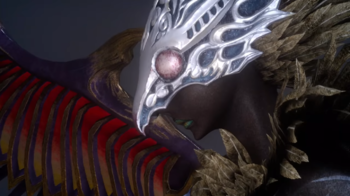 A Messenger whose name and very existence had been lost to history until a statue of her was recovered by the Ixal beastmen in the "Adventurer from Another World" quest. When Noctis and his friends faced off against the primal Garuda, the messenger lent her strength to Noctis to help him emerge victorious. Afterwards, she vows to ally herself with the Chosen King. With her own name long forgotten, she forges a new identity for herself, taking the name of the slain Lady of the Vortex: "Garuda".

One of the twenty-four Messengers of the Gods, who fought in the War of the Astrals. He is never seen in-game, but in The Dawn of the Future, Lunafreya locates a spear and sword in the ruins of Solheim that she believes to be Gungnir and Zantetsuken.