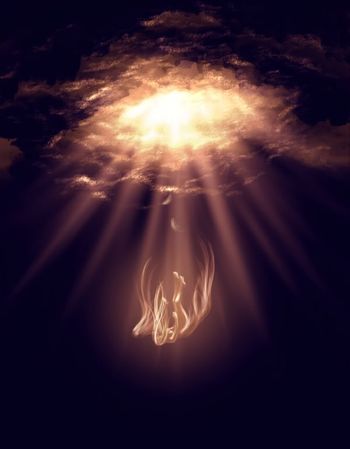 ...Someone fat get in my waaaaaay!
"And war broke out in heaven: Michael and his angels battled with the dragon, and the dragon and its angels battled but it did not prevail, neither was a place found for them any longer in heaven. So down the great dragon was hurled, the original serpent, the one called Devil and Satan, who is misleading the entire inhabited earth; he was hurled down to the earth, and his angels were hurled down with him."
— Revelation 12:7-9, The Bible

What does one think about when one hears the word angel? Do you see them as glowy Winged Humanoids, overworked suits, or for extra flavor, flaming wheels covered in eyes? Regardless of what (meta)physical traits one assigns to them, one thing is almost always consistent: they are paragons of virtue and honor.

But what happens if they stop being so nice? Then we have a problem. See, when you turn your back on God (or the local variant) while knowing They're the real deal, there's really nowhere to go but down.

And down they go; when an angel goes bad, they tend to become far, far worse than any human ever could. They'll gleefully engage in atrocities that would leave any mortal curled under their beds in fear. The cause of their fall may be an old grudge, some extreme More Than Mind Control, or completely unknowable to mortals. Whatever the cause is, there's no going back.

Very, very rarely are any examples of this good, and usually only in certain circumstances. At the opposite end you have Ascended Demon.

Often an extreme case of Light Is Not Good and Fallen Hero. May or may not be considered demons. Not to be confused with Fallen Angles. The ur examples come from hints of angels who faltered and not so nice heavenly beings in The Tanakh with the Trope Maker coming from an interpretation of Isaiah's rebukes to "Lucifer", though it's worth noting that "Lucifer" is explicitly stated in the surrounding parts of the chapter to be the King of Babylon and nothing to do with a fallen angel whatsoever. Usually represented visually as a Broken Angel, though some still have their "un-fallen" countenance. If they were the right hand of the big guy upstairs, and brought a mass of other angels down with them, then it's also a case of The Paragon Always Rebels.

Thanks to some modern interpretations and the tendency to side with underdogs, fallen angels are often portrayed sympathetically nowadays: often as rebellious victims of Celestial Bureaucracy and Light Is Not Good like in Bedazzled (1967), or perhaps as lovable rogues like in Time Bandits. Often portrayed as regular angels, but with skimpier outfits (often with a red and black motif) and a bit sluttier personalities (they're usually female, because of women's corruptible nature. Think Adam and Eve).

And as a warning, if an Archangel or higher angel happened to be the one who fell, be afraid. Be very afraid.

Not to be confused with the Comic Book of the same name, or the professional wrestler with the Red Baron "The Fallen Angel", Christopher Daniels.