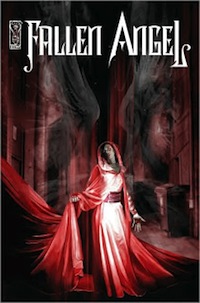 For the trope of the same name, go here.
Advertisement:

Welcome to Bete Noire, the City that Shapes the World. If by some misfortune you have stumbled in here, please take note of your surroundings. For drugs, please visit Asia Minor at the graveyard. If sex is what you're interested in, Bumper Ruggs has people of all orientations and proclivities. If a man called Benny offers to help you, do not accept. If spiritual enlightenment is your goal, seek elsewhere; there is only one church in Bete Noire, and it's usually empty. If you're helpless and hopeless, make your way to Furor's, where you may be able to get some help.

Written by Peter David, Fallen Angel tells the story of Liandra (a.k.a. Lee, a.k.a. the Fallen Angel of the title), a guardian angel exiled from heaven for disobeying God. Now the self-appointed "court of last resort" for the desperate, she aids those in need with her particular brand of cynicism and dark humor.

Fallen Angel is also the story of Bete Noire. An innocuous city by day, by night the City of Sin comes alive, deciding who lives and who dies, and who will be able to enter and leave. It is run by its Magistrate, a position which is itself under the supervision of the Hierarchy, a mysterious organization of unknown aims.

Some of its other main characters include:

The comic book comprises two volumes. The first volume, published by DC Comics, began publishing in July 2003 until it was cancelled in its twentieth issue. The series resumed publication on December 2005, this time under the helm of IDW Publishing, lasting thirty-three issues. Since then, the book has adopted a series of mini-series format, the first being Fallen Angel: Reborn (published in 2009) and the second and latest being Fallen Angel: Return of the Son, published in 2011.

Initially, a good bit of speculation surrounded Liandra's identity; given her powers and appearance, many people surmised that Liandra was in reality Linda Danvers, who was Supergirl during a volume penned by David. David did his best to maintain the answer ambiguous until he revealed her origins at the beginning of volume 2.

Not to be confused with Angel (IDW), another IDW-published comic book with "Angel" in its title. It is worth noting, however, that Illyria from Angel made a crossover appearance in Reborn.