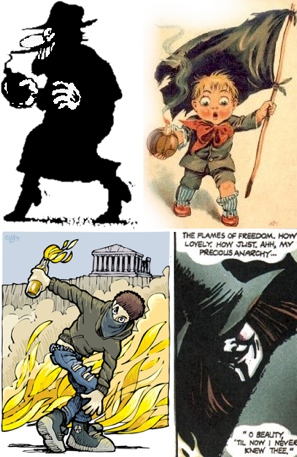 Cartoon conceptions of anarchism have varied over the years. Proceeding from top left: Larry Gonick (1991);

◊
Mad Stan: BLOW IT ALL UP!
Terry McGinnis: Keep it down, Stan. We're in a library.
Mad Stan: You think this is a joke? Look around, Batman! Society's crumbling! And do you know why?
Terry McGinnis: Too many overdue books?
Mad Stan: Information overload, man! As a society we're drowning in a quagmire of vid-clips, e-mail, and sound bytes! We can't absorb it all! There's only one sane solution: BLOW IT UP!
— Batman Beyond

Anarchism is an umbrella term for a bunch of views that advocate the reduction or elimination (or even simply ignoring) of hierarchic power and its replacement by various forms of voluntary non-hierarchical cooperation. Historically, many anarchists encourage nonviolent means for this goal.

Since the 19th century, after anarchism began to take form as a social movement, news, propaganda, and fiction have vilified anarchists as maniacs who simply want nothing but chaos, destruction, and anarchy for anarchy's sake. Anarchists often fill the role of Terrorists Without a Cause. This also tended to be the stereotypical image of communists for many Westerners until the "Orwellian intellectual infiltrating the government" image gained popularity starting in the 1940s.

The "bomb-throwing" image of the anarchist was locked into the mindset of the public after the 1886 Haymarket Square riot in Chicago, where eight anarchists went on trial for a bomb that was thrown at a rally (they were not actually charged with throwing it, as some weren't even at the rally; instead they were charged with inciting the action, being influential anarchist figures in Chicago). Most people had probably never paid much attention to one of the 19th century's many radical social movements before, but the sensationalized spread of the incident left a negative impression in media for a long time. The assassination of several heads of governments by anarchists during the following twenty years (most notably French President Marie François Sadi Carnot, Spanish Prime Minister Antonio Cánovas, Austrian Empress Elisabeth, Italian King Umberto I, and American President William McKinley) didn't help them either. During this period some anarchists advocated violent acts as "attentats" i.e. a means of drawing attention to their cause to spark a revolution by inspiring others, called "propaganda of the deed". Obviously, this backfired horribly, painting them as entirely depraved terrorists.

Often depicted with excess facial hair, or wearing a mask.

Traditionally equipped with a Cartoon Bomb, described by one stock image-hosting site as an "old-fashioned anarchist-style round bomb with burning fuse

Compare Mad Bomber, Dirty Communists, Ludd Was Right. For the right-wing version, see Right-Wing Militia Fanatic. See also Anarchy Is Chaos for an aversion. Contrast with Revolutionaries Who Don't Do Anything. For actual bomb-throwing as a Weapon of Choice, see Throw Down the Bomblet.