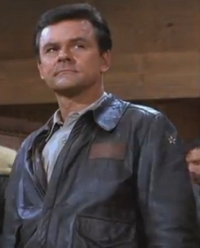 United States Army Air Forces Colonel Robert E. Hogan is the senior ranking POW officer in the camp and the leader of the group. He was born in Bridgeport, Connecticut, but considers Cleveland, Ohio to be his home. He commanded the 504th Bomb Group before he was shot down while on a raid on Hamburg in an operation masterminded by Luftwaffe Colonel Biedenbender. It is stated by a US Navy officer in a first-season episode that "If you weren't one of their prisoners, you'd be one of ours", due to his less-than-legal methods of accomplishing his goals. General Biedenbender stated that Hogan has a flair for the over-complex, which is often shown in the series. Many of the covert operations shown are highly complex, but due to Hogan's care in planning and the skill of the other characters, they are usually successful. 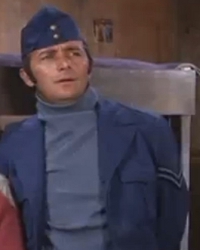 Royal Air Force Corporal Peter Newkirk is the group's conman, magician, pick-pocket, card sharp, forger, bookie, tailor, lock picker, safe cracker and impersonator of German officers (and on one occasion, Winston Churchill). On numerous occasions Newkirk also impersonates women to fool the Germans and help the underground movement. He also is in charge of making uniforms and assisting in distracting the Germans to perform other sabotage. 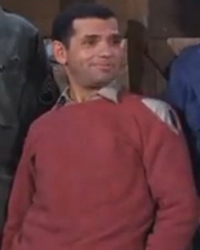 Free French Air Force Corporal Louis LeBeau, a master chef and notoriously patriotic Frenchman. He is often seen referring to Nazis and Germans in general as "pigs", and specifically as "Boches" or "dirty Boches" (a derogatory word for Germans used since the Franco-Prussian War). LeBeau is also a master of covert operations, and has taken the precaution of befriending the camp's guard dogs. As a result, he's able to enter their compound through a secret entrance under a doghouse without the dogs raising the alarm. 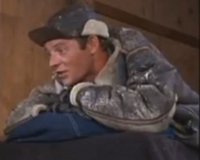 United States Army Air Corps Technical Sergeant Andrew J. Carter, aka Little Deer Who Runs Swift And Sure Through Forest, (fun fact, he was a lieutenant in the pilot episode) is in charge of ordnance and bomb-making. He also shows talent in chemistry and can produce formulas and chemical devices as needed. Carter is also often called upon to impersonate German officers and, most convincingly, Adolf Hitler. While bright and enthusiastic at his specialties, Carter often shows a lack of common sense otherwise. For example, after the blowing up of a train Carter could not remember the way back to Stalag 13. 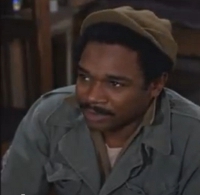 United States Army Air Corps Staff Sergeant James (a.k.a. Ivan) "Kinch" Kinchloe is primarily responsible for radio, telegraph, and other forms of electronic communications. In the series pilot, Kinchloe is introduced as Hogan's chief of staff, and, in addition to his communications expertise, is seen speaking fluent French to Corporal LeBeau. Kinch is from Detroit and has worked for the telephone company. In one episode, he mentions that before the war he fought in the Golden Gloves. 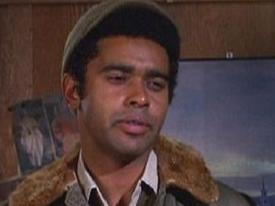 Following Dixon's departure from the show after season five, the producers replaced his character in the sixth season with United States Army Air Corps Sergeant Richard Baker. The tasks assigned to Sergeant Baker are almost identical to those of Staff Sergeant Kinchloe, including limited impersonation of some German voices.

Vladimir Minsk was a character only seen in the pilot episode. A Sergeant in the Soviet Air Force before being captured, Vladimir came from a long line of Russian tailors, and used his skills to make uniforms for the men. Newkirk and LeBeau took over his duties in the regular series. He was also bad at sports.

Played by Stewart Moss
The "Outside Man", who frequently escapes from prison, then switches places with escaped prisoners form other camps who come into the camp in his place while their escapes are processed.

Played by Unknown actors
Minor members of Hogan's operation, and Recurring Extra's throughout the entire series. Their names come from occasional roll call or mail call scenes.
The Germans 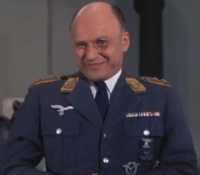 Kommandant Oberst (German for Colonel) Wilhelm Klink is an old-line Luftwaffe officer of aristocratic (Junker) Prussian descent and a blatant social climber. He was born in Leipzig in the early 1890s, though he refers to Düsseldorf, where he attended the Gymnasium (high school) (graduating 43rd in his class), as his home town. After failing the entrance exams to study law or medicine, he received an appointment from Kaiser Wilhelm II to a military academy, through the influence of his uncle, the Bürgermeister's barber, and graduated 95th in his class.

Attempts to run the camp as sternly as possible, but is a major pushover and rather incompetent, making it pretty easy for Hogan to trick him into unwittingly assisting his plans. 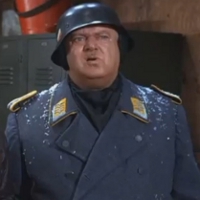 Hauptfeldwebel (Senior Master Sergeant) Hans Georg Schultz, serial number 23781, is Klink's bumbling, highly unmilitary 300-pound Sergeant of the Guard. Schultz is a basically good-hearted man who, when confronted by evidence of the prisoners' covert activities, will simply look the other way, repeating "I hear NUSSINK, I see NUSSINK, I know NUSSINK!" (or, more commonly as the series went on, simply "I see NUSSINK–NUSSINK!") to avoid being blamed for allowing things to have gotten as far as they already had, and possibly given a one-way trip to the Eastern Front.

General der Infanterie Albert Hans "Hansi" Burkhalter is Klink's superior officer who frequently tires of Klink's babbling and incompetence, often telling him to "shut up" and threatening to send him to the Russian Front. Burkhalter is mystified by Stalag 13's perfect record, unable to make sense of it in combination with its Kommandant's frequently-evidenced incompetence. Burkhalter affects to live a Spartan existence like a good German officer, but in reality, he loves the good life, even in war. He is scared to death of Mrs. Burkhalter (calling her "the highest authority in Germany"), testifying to this several times during the series. 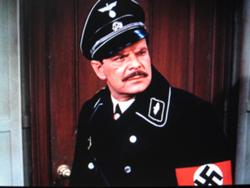 Kriminalrat (Major) Wolfgang Hochstetter is a Gestapo officer and an ardent Nazi who never understands why Hogan is constantly allowed to barge into Klink's office at will. Hochstetter frequently demands of Klink "Who is this man?" or "What is this man doing here?!" with increasing stridency. He is also noted for the many times he shouts "Baah!" at Klink or Hogan after his multiple failures. Klink is justifiably afraid of him, but Burkhalter, who despises Hochstetter just as much as Klink does, is not.

General Burkhalter's sister. She is usually in a one-sided relationship with Klink (who is scared to death of her), but Hogan manages to split the two one way or another.

Jon Cedar
One of Klink's guards.

Walter Janowitz
The local vet, and an underground member who smuggles people (and equipment) in and out of camp for Hogan.

A member of the German generals staff who twice visits the area.

Played by Ben Wright
A Gestapo officer who twice clashes with the Heroes.

One of Hogan's underground contacts.

An unlucky junior officer at Stalag 13 who specializes in search parties.
Advertisement:
Others 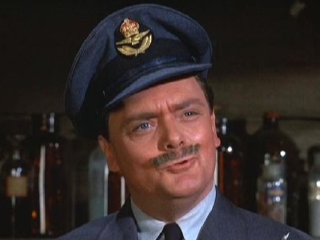 Group Captain (Colonel) Rodney Crittendon is a hopelessly incompetent British officer who crosses paths several times with Hogan and his crew. Crittendon believes that a POW's only focus should be escape. When first transferred to Stalag 13 from Stalag 18, Hogan posed a hypothetical question to Crittendon asking what he would do if he were aware the POWs were engaged in spying and sabotage. Crittendon replies that he would report them to the German authorities, thus preventing himself from being included in the official mission of the Stalag 13 POWs. He ends up finding out about their set-up, but still fouls up operations through a mix of bad luck and incompetence. 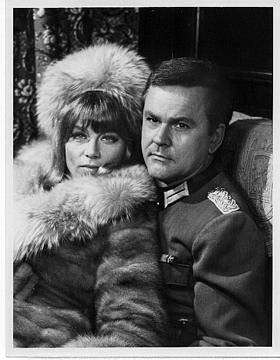 Marya is a Soviet (although she insists she's a White Russian) spy who works occasionally with Hogan, but whom he doesn't entirely trust. She often appears as the trusted assistant or lover of some high-ranking German officer or scientist. Her mission is often to either discredit or destroy said officer or scientist, as she notes that "Hitler can't be expected to kill all of his generals." Her schemes often come into conflict with Hogan's plans, but she always proves to be either faithful to the Allied cause or to have compatible causes of her own.

A member of the French Resistance. Her real name is Marie Louise Monet.

Played by Hans Conreid (first appearance) and Vito Scotti (second appearance)
An Italian POW camp who briefly studies under Klink and is recruited by the heroes.

Played by Felice Orlandi
A resistance member who works with the heroes on occasion.
Feedback