This page relates to characters seen in the 2019 TV series adaptation of His Dark Materials.

For the characters as portrayed in the book trilogy and subsequent sequel series, see here. 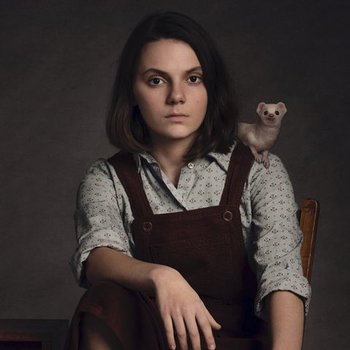 She, along with her dæmon, Pan, begins the series as a the 12-year old ward of the prestigious Jordan College in Oxford, with the occasional visits from her presumed uncle Lord Asriel. She is quickly forced to grow up after the disappearance of her best friend, Roger, and being thrust into a world of danger and intrigue.

Lyra's dæmon, her more patient and prudent other half. He prefers the form of a white mustelid, usually a pine marten.
Mrs. Coulter 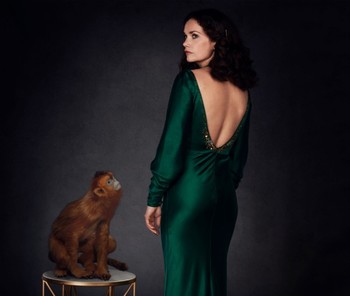 Marisa and the Monkey

Begins the series as mysterious and beguiling figure, who takes custody of Lyra from Jordan. She appears on the surface to be a wealthy academic, but is soon revealed to be much more.

Mrs. Coulter's dæmon, her more bestial and outwardly emotional other half. He prefers not to speak to anyone but Marisa, and is often the menacing to her sweet.
Lord Asriel 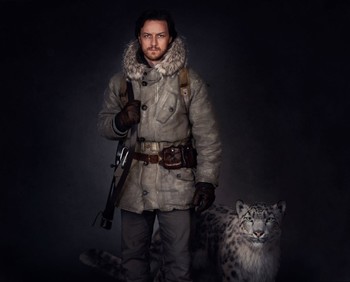 A hot-blooded experimental theologian, member of Jordan College, and Lyra's nominal guardian and uncle at the start of the series. His heretical studies often get him in hot water with the Magisterium. His dæmon, Stelmaria, takes the form of a Snow Leopard. 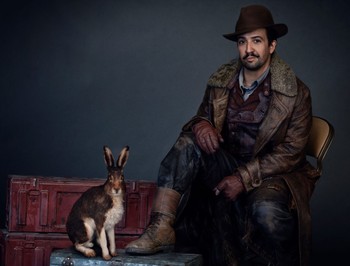 The rakish Texan aeronaut-for-hire who can keep his head in a crisis. He starts off the series working for the highest bidder, but comes to sympathize with the Gyptian cause, and bonds with Lyra.

Lee's dæmon, an inquisitive but snarky arctic hare who would prefer Lee kept his head down and got paid.
Boreal 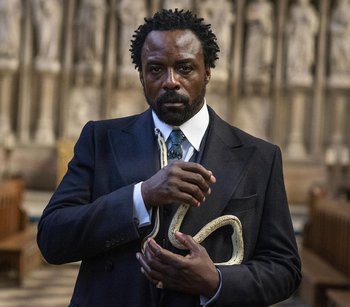 A powerful figure within the Magisterium, who is often assigned to investigate "Heretics". However, his ambitions extend dangerously beyond his superiors' boundaries. His dæmon is a snake named Grizel, whom he often hides within the folds of his suit.
Advertisement: 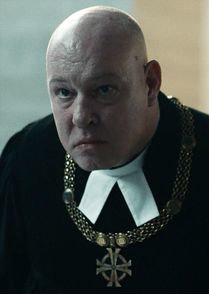 The highest authority yet seen for the Magisterium. One of the most powerful men in the world. A small, hunched-over man who prefers faux-courtesy to speaking plainly. His dæmon settled in the form of a macaw.
Macphail 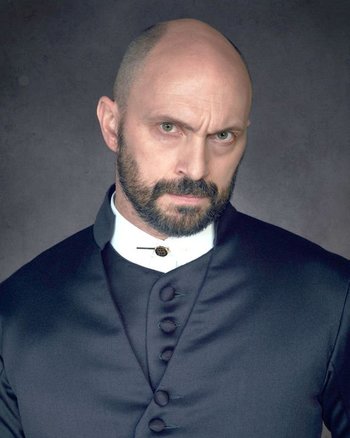 Played By: Will Keen

A highly ranked member of the Magisterium, and professional rival of Mrs. Coulter. He is fanatically devoted to stamping out heresy and ensuring the Magisterium maintains dominion over the world. His dæmon takes the form of a lizard.
Garret 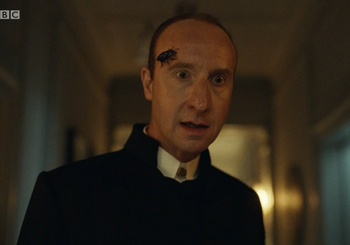 The right hand man of Father Macphail, who often accompanies him on important assignments. He is intense and easily annoyed. His dæmon takes the form of a beetle.
Pavel 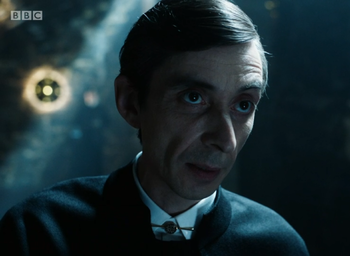 The alethiometrist for the Magisterium. He has access to near infinite knowledge, but is slow and methodical in his readings. Professional permission to ask him a question for the alethiometer is strictly controlled by his superiors, leaving him socially isolated. His dæmon takes the form of a rat.
Advertisement:

The General Oblation Board of London 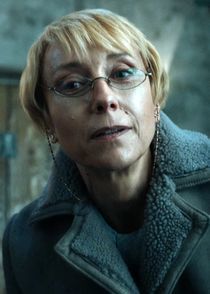 The head Experimental Theologian at "The Station". She believes their experiments will change the world, and looks forward to the rewards the Magisterium will bestow once they have a breakthrough. Her dæmon takes the form of a red fox.
Rendal 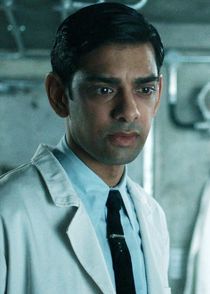 An Experimental Theologian at "The Station". He is deeply conflicted about the ethics of the experiments they perform, but defers to Dr. Cooper when she claims they are necessary. His dæmon is not shown.
Clara 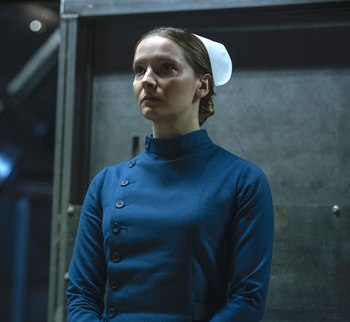 A young nurse and nun at "The Station". She is strangely emotionless, and will often emphasize how this is "the Best place you could possibly be." Her dæmon is not shown, but she reveals his name is Nicholas. 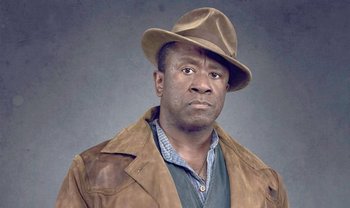 The middle-aged king of the Western Gyptians of Britain. A capable and kind ruler, who takes the lead into the investigation of disappearing Gyptian children. His dæmon takes the form of a black crow.
Farder Coram 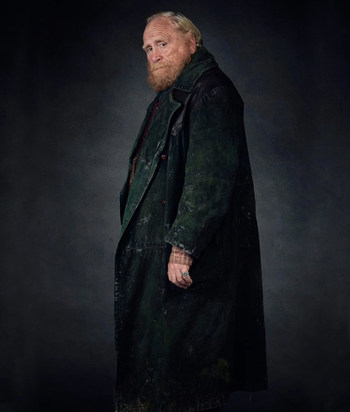 The aging right-hand-man of Lord Faa. Well-travelled, and formerly the lover of Serafina Pekkala. He, along with Lord Faa, begin the series investigating missing children. His dæmon, Sophonax, takes the form of a golden-brown cat.
Ma Costa 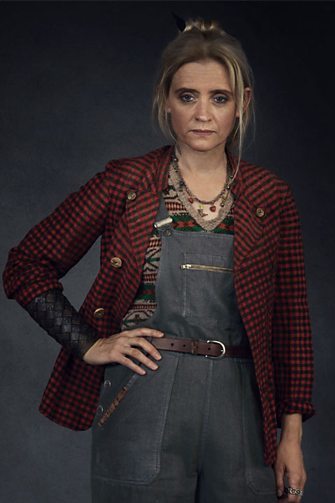 The single-mother of Tony and Billy, who begins the series overseeing Tony's coming of age ceremony. She is initially dismissive of the rumors of Gyptian children disappearing, but eventually comes to believe following Billy's abduction. Her dæmon, Jal, takes the form of a goshawk.

The Master of Jordan College 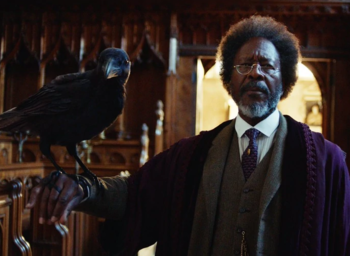 The head of Jordan College in Oxford. He is an old friend of Lord Asriel, and in charge of Lyra's upbringing and ensuring her education. His dæmon is a raven.
Roger 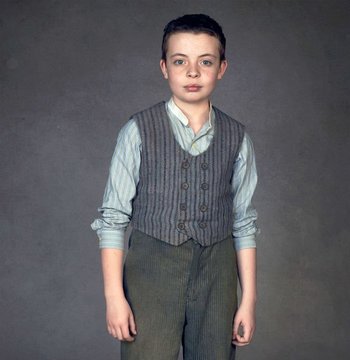 Lyra's closest friend at Jordan College. An orphan boy who works in the kitchens, he often joins Lyra in her explorations of Jordan, from the roof of the college, to the tombs beneath the school. His dæmon, Salcillia, has not yet settled on a fixed form.
Charles 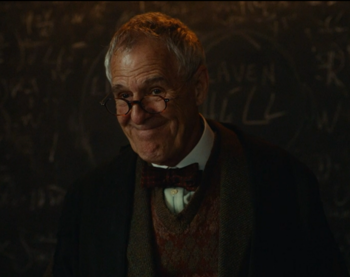 The head librarian at Jordan College. A trusted friend and confidant of the Master. He is often assigned to educate Lyra in the areas of History and Experimental Theology. His dæmon, Serena, takes the form of a crested gecko. 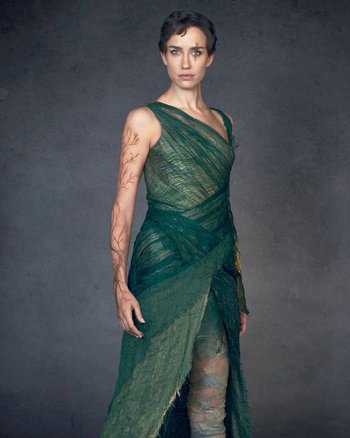 An over three hundred year old witch from the far north. She takes a great interest in Lyra, and had a previous relationship with Farder Coram. As a witch, her dæmon Kaisa can separate great distances from her, but the bond they share allows them to stay in constant contact. 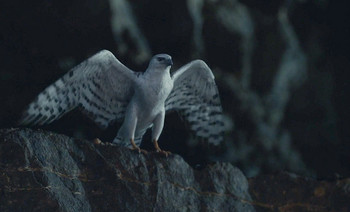 Serafina's dæmon. He is straightforward and direct, but not unkind. As he is the dæmon of a witch, they can separate great distances from one another, but remain bonded. He takes the form of a northern gyrfalcon. 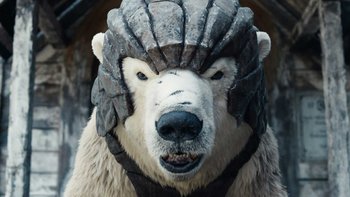 The exiled former prince of the armoured bears. A fierce warrior, but not without mercy. He begins the series doing menial labor the the local government of Trollesund. He is loyal friends with Lee Scoresby.
Iofur 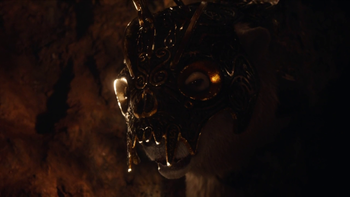 The recently crowned king of the armoured bears. A rival of Iorek and begrudging ally to Mrs. Coulter. Secretly, he craves acceptance into the Magisterium, and wishes to become a human with a dæmon. 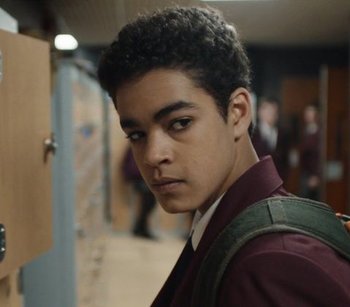 A young secondary school student in Oxford. After the disappearance of his father when he was little, Will has taken it upon himself to be the primary caregiver for his mother, Elaine. He tries to avoid notice from his classmates and teachers, but does train in boxing as an outlet.
Elaine 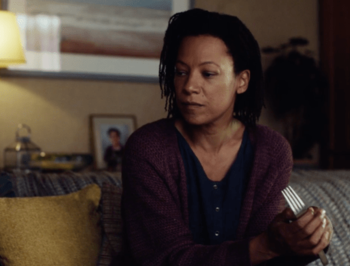 The mother of Will, and the presumed widow of John. She suffers from an unspecified mental illness that leaves her sometimes paranoid and difficult to understand, which was exacerbated by her husband's disappearance. Despite this, she is a loving mother, and does not enjoy being taken care of by her young son.
John 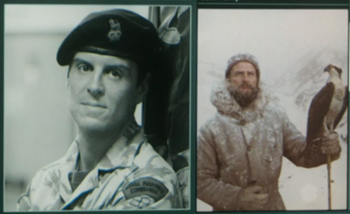 John and his dæmon

The husband of Elaine and father of Will. Formerly of the Royal Marines, he has been missing from Will's World after disappearing on an arctic expedition twelve years before the start of the series. On Lyra's world, he is a respected academic and explorer, who goes by the name "Stanislaus Grumman". His dæmon takes the form of an osprey. 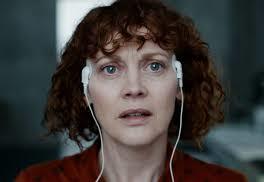 An astrophysicist especialized in Dark Matter or Dust.