"Rhoslyn's first instinct was generally a stupid one, and this idea was right up there. What do you do when you see a rampaging and terrified bear? Most people figure "run." Rhoslyn, on the other hand, figured "I'm going to go feed that bear some cocaine."
— Rosa Vernal 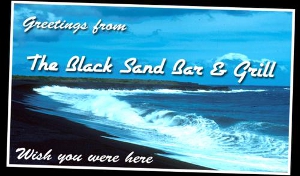 on Gaia Online that has been liberally infested with TVTropes. There are upwards of 70 links to this site from the Wall of Text on the front first page. Located on a tropical bar on a beach with black sand, the story revolves around the adventures of a psion human, his faerie wizard best friend who he bought the Maui-sized island from, and the patrons. The main "plot" events take place periodically, which vary from dealing with the Unseelie Court and their Seelie counterparts, aiding the local rebels in their struggle against the current government, looting local caves and temples, and the occasional attacks by powerful NPC's.

In between their antics, the patrons lounge around drinking G's Epic Moonshine or some fine brandy, throwing pink beach balls at people who enter through the nonexistent front door, run a Black Market, fight each other, work, do drugs, play with the fourth wall and have sex... a lot.

On the OOC side of things, most of the people who post regularly are friends of the owner or friends of their friends. They're a generally friendly group, but heaven help you if you're deemed incompetent. Most of the players enjoy poking fun at cliches and making references to pop-culture and memes

in their posts, even including a rage comic

. Recently, the old owner has transferred ownership to a different patron after the bar being mostly closed for two years. As such, the tropes from the Black Sand Bar two years ago are in a separate folder to keep confusion down.

open/close all folders
The New Black Sand Bar
Thurgood: "Wait...
...are you worried about me spending all of Rhoslyn Vernal's money? I could put a sideways eight on the numerical amount line, write 'positive infinity' in the spelled-out portion, and the check would go through in three days without Rhoslyn even noticing."
Aveline: "That is mathematically impossible."
Thurgood: "So is Rhoslyn's wealth."
The Old Black Sand Bar
Rhoslyn: Screw you, narrator, I edited this myself!\\