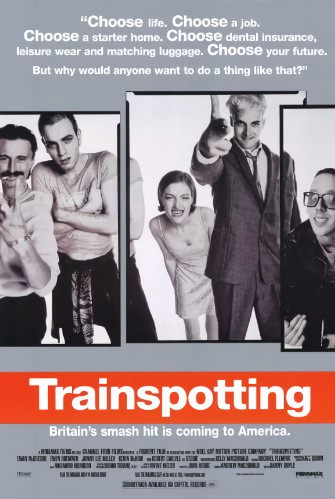 "Choose your future. Choose life... But why would I want to do a thing like that? I chose not to choose life: I chose something else. And the reasons? There are no reasons. Who needs reasons when you've got heroin?"
— Renton (the film)
"Still, failure, success, what is it? Whae gies a fuck. We aw live, then we die, in quite a short space ay time n aw. That's it; end ay fuckin story."
— Renton (the book)
Advertisement:

Trainspotting is a dark and bizarrely written novel by Irvine Welsh, published in 1993, and as many a Rail Enthusiast has probably found out the hard way, has absolutely zip to do with actually looking for trains. Wildly popular, the novel kicked off a two decade long successful writing career.

The story follows a group of young Scottish men who are close friends, and their lives of drinking, sex, family problems, HIV, death, and most of all, heroin addiction. The protagonists are Mark Renton, an on-and-off heroin junkie, and his friends Danny "Spud" Murphy, Simon "Sick Boy" Williamson, Francis "Franco" Begbie (these four are known as the Big Four characters of the franchise), and Thomas "Tommy" Laurence; childhood pals, they are beginning to drift apart. It's all very darkly humorous and then a baby dies. Noted for its cynical and occasionally shocking tone, the novel has been called "the voice of punk, grown up, grown wise and grown eloquent".

Large chunks of the novel are written in heavily accented, stream-of-consciousness style. The initial challenge is to figure out who the main characters are, whose points of view are being shown, which of the dozens of nicknames refer to which people, and what personalities they've got. Because of this, the novel starts out as an incomprehensible trip — but after a few chapters, things start to click and the plot starts to unfold.

It was adapted into a film in 1996 by Danny Boyle, and was the second of three films from the mid nineties directed by Boyle and starring Ewan McGregor, along with Shallow Grave and A Life Less Ordinary. It also features Jonny Lee Miller as Sick Boy, Ewen Bremner as Spud, a scarily emaciated Kevin McKidd as Tommy, Robert Carlyle as Francis Begbie and a youthful Kelly Macdonald as Diane. Allegedly due to a head cold, Kevin McKidd missed being on the iconic poster.

and the offcial trailer here

The characters also make other appearances in passing throughout Welsh's works, perhaps most notably in Glue and its follow-up A Decent Ride. In some ways, the character traits of the Big Four of the Trainspotting series are reflected in the "B team" of Glue, but with important differences.