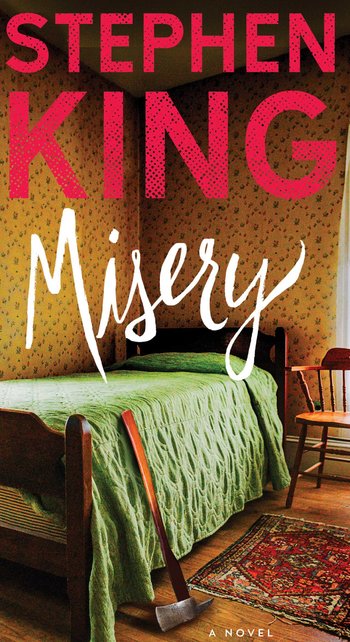 "I'm your number one fan..."
"The book Stephen King wrote in an attempt to keep other people from becoming authors."
— Patrick Rothfuss

Novelist Paul Sheldon crashes his car in a Colorado snowstorm while driving west to celebrate finishing his latest book. His legs shattered, he is rescued by Annie Wilkes, a former nurse, who takes him to her isolated house in the countryside. She claims that she is his number one fan and loves his Misery novels, as well as their main heroine Misery Chastain. However, the next Misery novel is released while he's in her care, and Annie finds out that Misery dies at the end. She becomes enraged and forces Paul to write a new novel that undoes Misery's death. Paul, being too injured to leave her house, is totally dependent on Annie, and so begins his fight to find a way to write Misery back to life, all while Annie subjects him to all manner of deranged (and sometimes horrific) ministrations.

Rob Reiner directed a film adaptation in 1990, starring James Caan as Paul and then-unknown stage actress Kathy Bates as Annie, with Lauren Bacall in a minor role as Paul's editor and Richard Farnsworth as the local sheriff. Bates won an Academy Award for Best Actress for her acclaimed performance as Annie, making her the first (and to date the only) person to win an Oscar for a performance in an adaptation of a Stephen King novel. Her Oscar is also the only one received for any of Reiner's films as a director.

In 2015, a stage adaptation, written by William Goldman (who also adapted the screenplay for the film version), and starring Bruce Willis as Paul and Laurie Metcalf as Annie, premiered on Broadway, closing in early 2016.

Now my tale is told.
Feedback