Here be the characters of Tekkaman Blade 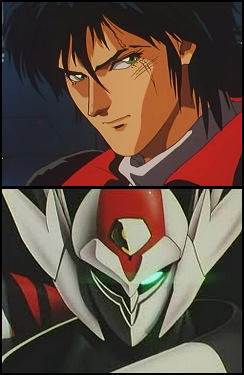 The main character of the show. Takaya is the 2nd son of the Aiba family and was captured along with them by the Radam and set to become a full Tekkaman until his father saved him and had him launched to Earth. The incomplete biological engineering allowed him to transform into a being hell-bent on the Radam's destruction, the titular Tekkaman Blade. With his memories not actually lost to him, he joined the Space Knights to defeat the Radam (getting the nickname D-Boy) and ultimately succeeds, but not without great sacrifice. Eventually however, the bonds he made with the Space Knights heal his trauma and he begins assisting his girlfriend Aki in training a new generation of good Tekkamen. 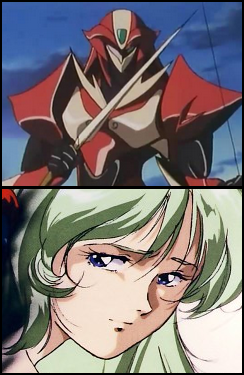 D-Boy's sister and the youngest member of his family, Miyuki was part of the Argos crew. She has a very close relationship to her brother. 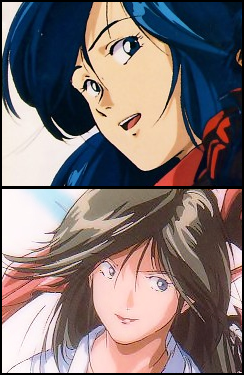 Aki is a member of the Space Knights and the co-pilot of the spaceship Blue Earth. 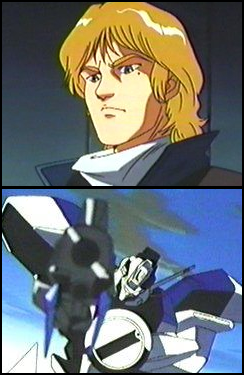 A member of the Space Knights, Noal is a laid-back, flirty young man who abandoned a career in the military in order to fulfill his dream of being a pilot. Initially antagonistic towards D-Boy, he ends up becoming one of his most loyal companions. He's a bit of a card shark and a gambler, and tends to be a bit overconfident and hot-tempered at times. 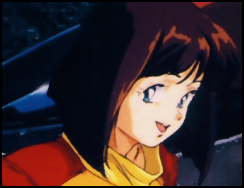 Chief communications officer for the Space Knights, she is only 16 and can at times act rather childishly - yet at other times may see things more clearly than anybody else. 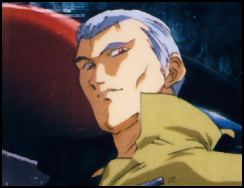 Formerly the assistant of General Colbert, Freeman is now the commander and chief of the Space Knights. He uses his intellect, leadership skills and his ability to keep a cool head under pressure to help and protect his team and most importantly, to find a way to turn the tables in humanity's favor in the war against the Radam. 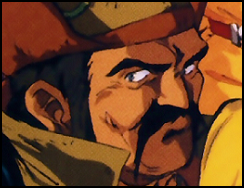 Honda is the man to call when you need something built good and fast. He is Pegas' co-constructor and the Blue Earths' main repair engineer is one of the persons whom the Space Knights rely on to get them off the ground. 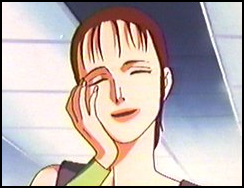 A 19 year old computer whiz and technophile with a crush on D-Boy. Because of his implied homosexuality/transexuality, his gender was changed to female in the English dub. 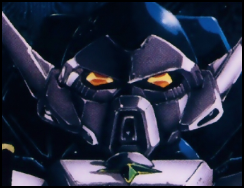 Pegas is a robot designed and created by the Space Knights' engineers for the purpose of enabling D-Boy/Blade to transform into a Tekkaman after his crystal shattered. He also serves as a bodyguard, transportation method and battle aid for Blade and the two eventually become friends in spite of Pegas being a robot. 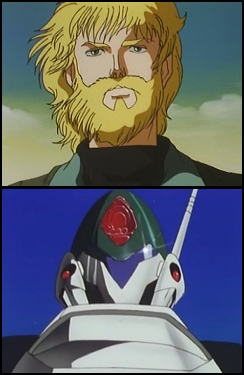 Initially a laid-back, easy-going war correspondent out to write a story about Tekkaman Blade, Balzac is soon to be revealed as working for General Colbert as a spy. His mission was to gather as much information about the Tekkaman armor as possible, which he achieves by breaking into Commander Freeman's secret laboratory. Afterwards, he was chosen to pilot the first prototype Sol Tekkaman and while he did well against the regular Radam monsters, he was no match for Tekkaman Evil. After a near death experience following that encounter, Balzac reforms and joins the Space Knights. 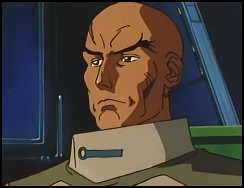 A haughty and extremely ruthless man, Colbert is one of the top generals of the Earth Defense Force and a former colleague of Freeman's. From the start, he is very interested in Tekkaman Blade and tries to have him transferred under his control. He later sent a spy to gather information about Tekkaman and used the data to create a Sol Tekkaman suit which proved very efficient against regular Radam, but failed when confronted with a real Tekkaman. During the war he gained access to the Thunderhawk missile, which he planned on using to destroy the Space Ring, regardless of the disastrous results it would bring for the human race, as large chunks of the Space Ring would fall on Earth and level anything in their path. Tekkaman Blade destroys the missile in mid-flight, which wipes out Colbert together with his entire base.

The leader of a commando squad that had been fighting the Radam's Spider-crabs, he first has an antagonistic relationship with Blade, before eventually warming up to him. 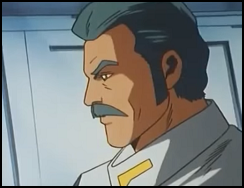 Patriarch of the Aiba family and head of the Argos exploration expedition. He rescues his second-eldest son from the Radam, launching him in an escape pod to earth, before dying from the after-effects of a failed transformation. 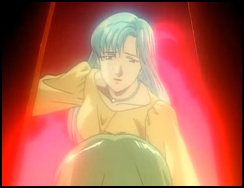 Kozou's wife and the mother of the Aiba/Carter children. Already dead by the start of the series, she appears infrequently in Blade's flashbacks. 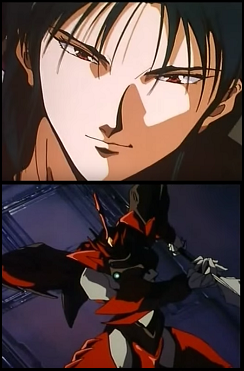 Originally one of the crew of the Argos expedition, Shinya is Blade's twin brother and arch-nemesis, following his corruption by the Radam. Skilled and merciless, he poses a real threat to Blade due to the previous bond their shared and his knowledge of his brother's weak points. Although Blade remembers his relationship with Shinya as a positive one, Shinya reveals that (on his side at least) it was filled with resentment and plagued by an inferiority complex combined with a dose of survivor's guilt following their mother's death in a fire he accidentally started as a young boy. Unlike the other Radam Tekkamen, Shinya has a a lifetime worth of bottled up personal frustrations and anger to fuel his desire to destroy Tekkaman Blade, and he does not care whether he himself survives in the process. 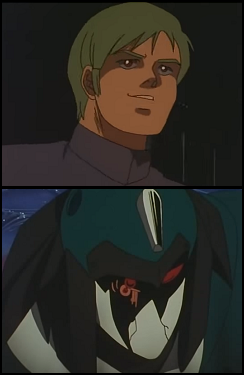 The first evil Tekkaman we meet, Fritz is a former friend of Takaya's and the one who gave him his iconic scar. 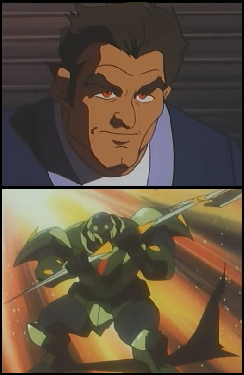 Once a close friend of Blade's family and his former martial arts mentor, Tekkaman Axe becomes a very dangerous opponent thanks to his skill, experience and knowledge of Blade's character and past. 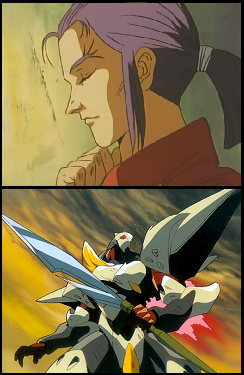 Nothing is known about Molotov's past outside the fact that he was a member of the Argos expedition. Cold and arrogant, he sees himself as a superior Tekkaman and is unshaken in his belief... until his last moments, that is. 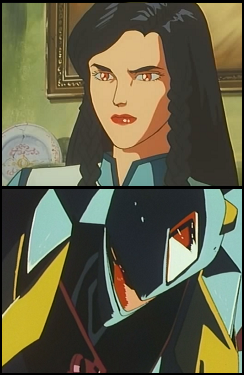 Feng Li is the fiancée of Blade's older brother and remains deeply devoted to him even after being forced to join the Radam side. She is also the only evil Tekkaman who displays a brief moment of regret for how things turned out - if the Argos had never encountered the Radam mothership, Feng Li would have married Kengo during the voyage.

The oldest of the Aiba/Carter siblings and the one selected by the Radam to be in charge of the Earth's invasion.

A young girl that was infected with the Radam beasts and almost turned into Tekkaman during the First Radam War, but was recovered in time. She became a mechanic in the new Space Knights and also learned the ropes to become a new Tekkaman that defends the Earth instead of invading it. She also has a huge crush on Tekkaman Blade.

For more information, see Aki in the Space Knights folder.

This is the same Aki Kisaragi that fought alongside D-Boy, now promoted into the leader of Space Knights. She also has access to a technology that allows her to become a Tekkaman herself, lacking a Voltekka, but she has enough acrobatic skills with her Tek-Lancer to make up for that.