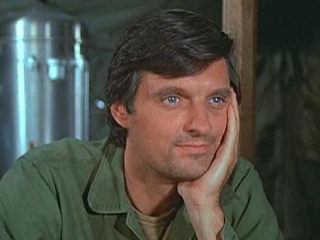 Chief surgeon of the 4077th MASH, he was one of the few people assigned to the unit for the entire run of the show; he lived in what was officially the Bachelor Officer Quarters, but almost always called "The Swamp". Hails from the fictional Crabapple Cove, Maine (Vermont in some early episodes) where his widowed father still lives. 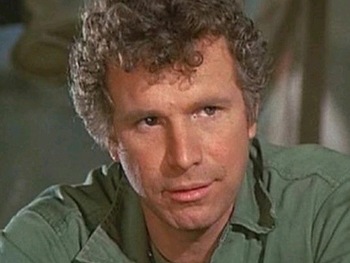 Another surgeon, and the first of Hawkeye's sidekicks in the Swamp. Originally supposed to be equal to Hawkeye, he ended up as more of a sidekick, much to the dismay of the actor. This, combined with issues with Rogers' contract, resulted in Trapper being Put on a Bus (back stateside) after the third season. He was not made an unperson, though—jealousy of him worked into two later B.J. stories. The nickname, as related in the original novel and film, is from an incident in his past, when a woman he was having sex with claimed he had "trapped" her. 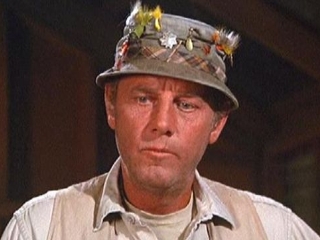 The Mildly Military commanding officer of the 4077th for the show's first three seasons. Almost always seen with a fishing hat (with lures that made any salute attempt risk a Purple Heart), he was from Bloomington, Illinois. He tried his best to keep the camp running, although between Hawkeye, Trapper, Burns, Houlihan, and Radar... well, OK, Radar's goal was to keep the camp running, too. 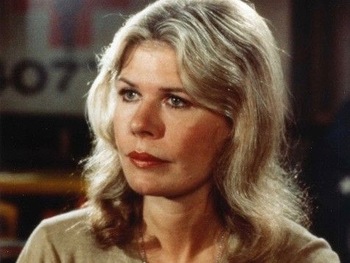 A no-nonsense, by-the-book soldier, and head nurse. Another of the few people who saw the whole show through at the 4077th. The first seasons had her in an illicit relationship with Frank Burns; after meeting Donald Penobscott, she breaks off with him. Later she breaks off with Donald, too, and spends the rest of the show single. 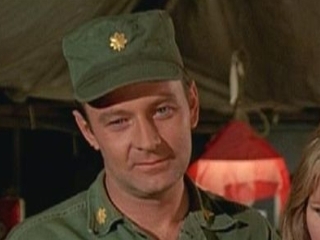 The camp's second-in-command, and a real Jerkass. The closest anyone came to enjoying his company in the series was Maj. Houlihan, with whom he had an illicit relationship—he has a wife and family back in his home of Fort Wayne, Indiana. 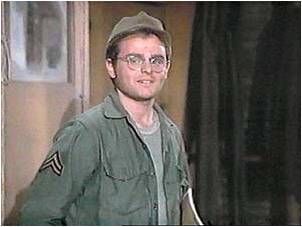 The company clerk, and the epitome of Hyper-Competent Sidekicknote To the point where the trope was originally called The Radar on this very wiki.; Steve Jackson has actually used him and his ability to know things 'before the Colonel' as full-blown Psychic Powers in two of the company's roleplaying games. In fact, his nickname derives from announcing incoming helicopters before anyone else can. Early on, he's shown as pretty savvy and worldly, and occasionally even a little bit devious; later, the Ottumwa, Iowa native develops more into the lovably naïve Woobie we all know. Note that we didn't say he stopped being savvy and worldly... whether he simply opted to behave better for the new CO is up to the viewer. 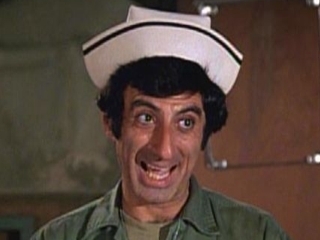 A corpsman forever trying to get out of the Army on a psychiatric discharge, most notably by dressing in women's clothing; he cited a family history of this. Of his family, most are not English-speaking, and most are in his hometown of Toledo, Ohio. And yes, both the Toledo Mud Hens and Tony Packo's are real. (The Mud Hens at one point slaughtered the big-league Detroit Tigers in a pre-season game. It was a rebuilding year.) 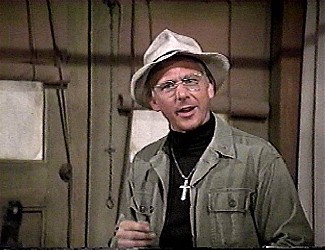 Played by: William Christopher (at least, for the most part)

A Catholic priest, Mulcahy is the 4077th's quietly devout company chaplain — and one of the few characters who managed to get a promotion during the course of the show. 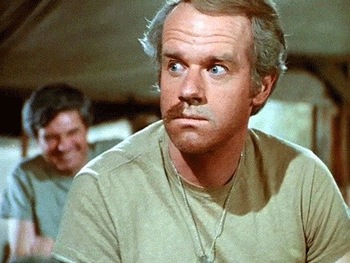 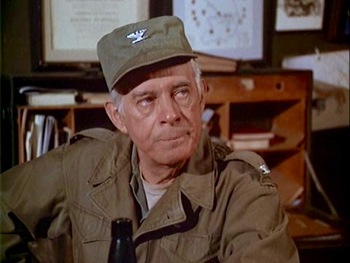 The 4077th's commander following Blake's departure. A Regular Army officer and veteran of two previous wars. His eventual hometown is Hannibal, Missouri, where his wife still lives and yet again waits for her husband to come back from war. 1/4 Cherokee as well ... and onetime member of The Cavalry. He even gets a horse, Sophie, during the series. 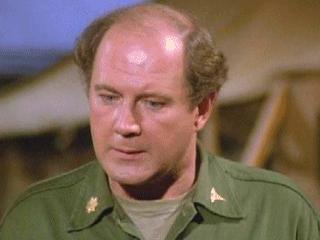 A (very) proud thoracic surgeon and pediatrician from Boston, he was initially stationed in Tokyo. Once Frank was Put on a Bus, the 4077th put in a call for a fourth surgeon. The call was taken by a colonel who Winchester was thoroughly trouncing at cribbage. One ill-timed boast later, and welcome to Uijeongbu. 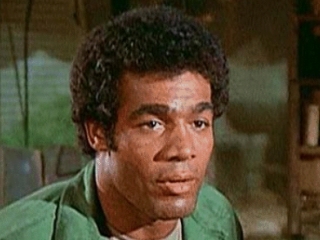 Originally introduced in the novel and movie as a ringer for an interunit football game, he vanished about midway through the show's first season, ostensibly after the network learned that there weren't any black surgeons in the theatre. 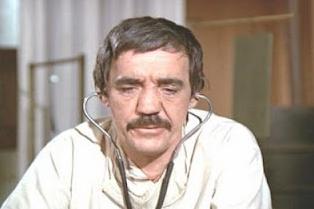 Another novel/movie character seen in the show's first season, Ugly John was an anesthesiologist hailing from Australia. 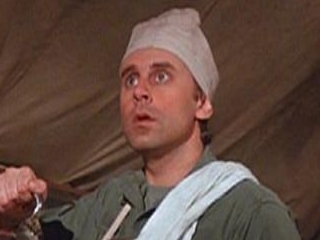 The long-suffering mess hall and kitchen staffer, who tends to cope the bulk of the camp's disgust-fuelled abuse over the lousy quality of their rations. 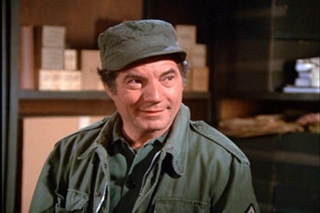 One of the minor sergeants who were part of the 4077's staff, originating from New York. Officially, he was rostered as the unit's supply sergeant. Appeared rarely, mostly notable for his bickering with Klinger and his hot temper. 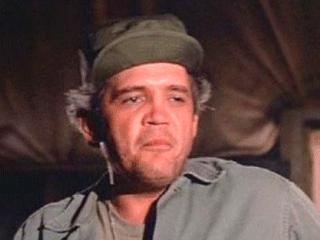 The unit's motor pool sergeant. A lazy, unambitious, sluggard from Louisiana who joined the Army because he thought it was a perfectly good skive. As he puts it, where else but the Army can you be a bum and actually get paid for it? 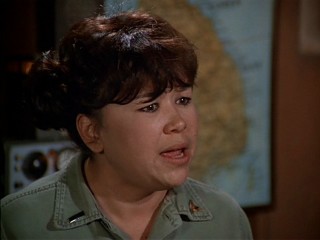 The most prominent recurring nurse character, a Japanese-Hawaiian (or, in "Life Time," a Chinese-Hawaiian). 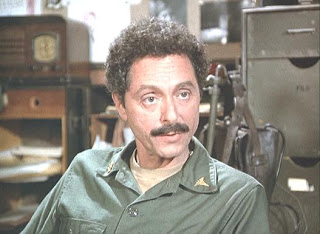 A psychiatrist assigned to the 121st EVAC Hospital in Seoul, he frequently visits the 4077 to assist on difficult cases... and to get in on the occasional poker game. 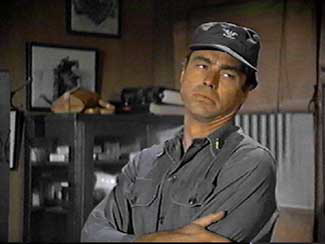 A psychopathic governmental intelligence agent (read: spy) who occasionally blows through the 4077, always on the look-out for Communist subversives and so paranoidly overzealous that the doctors took a delight in leading him headlong into disasters of his own making.

The owner of a small bar situated just outside the 4077, she provided a refuge for many of its personnel away from the routine of the camp. 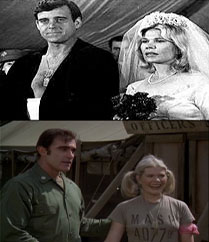 An officer from a wealthy family whom Margaret meets and falls in love with whilst on leave; the relationship is so sincere that they are eventually married, something that causes Frank Burn to have a mental breakdown. Unfortunately for Major Houlihan, the Lt. Colonel is an adulterous tightass who tries to dominate her and steals her paychecks whilst sleeping around behind her back, an abuse that eventually pushes her to the extent of divorcing him. 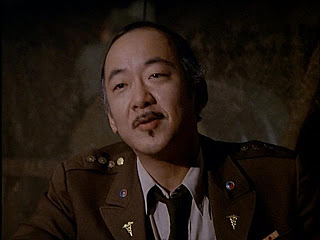 A singing, guitar-playing surgeon who appears in three Season 3 episodes.

A front-line infantryman who turns up a few times as a potential suitor for Margaret.

Voiced by: Several different actors, most frequently Todd Susman or Sal Viscuso
Other

The non-existent "star" of a single early-series episode; Captain Jonathan Tuttle is most unique for the fact that Hawkeye and Trapper manage to make everyone believe he exists, when he never did. Extrapolated from an imaginary friend Hawkeye would use to try and get out of trouble when he was little, Capt. Tuttle was used by Hawkeye as a way to secretly milk an extra Captain's salary from the army and donate to local needy Korean civilians. When an investigation got under way, Hawkeye and Trapper had to fool the whole camp into believing he genuinely existed - and then that he had been killed off before he could actually be met face to face.