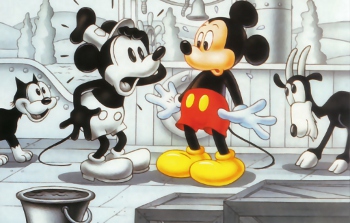 The mouse of 1928 meets the mouse of 1994.
"When people laugh at Mickey Mouse, it's because he's so human; and that is the secret of his popularity. I only hope that we don't lose sight of one thing — that it was all started by a mouse."
— Walt Disney
Advertisement:

The most recognizable fictional character of all time, and the mouse who solidified animation into the art form that it is today. Just put three circles together and you've got him— it's Mickey Mouse!

In 1928, Walt Disney had just lost the rights to his biggest cartoon star, Oswald the Lucky Rabbit, to Charles Mintz at Universal Studios and needed a replacement. Ub Iwerks, one of three animatorsnote the other two being Les Clark and Johnny Cannon who had stuck with Walt after the Oswald fiasco, designed a mouse inspired by a pet mouse Walt had back in his farm life. Walt originally intended to name the new character Mortimer Mouse (which would later go on to be the name of the sleazy Casanova Wannabe who would always unsuccessfully pine for Minnie's affection), but his wife, Lillian Bounds, suggested he go with the cuter-sounding name of Mickey. His full name is Michael Theodore Mouse.

Getting Mickey off the ground wasn't an easy task, though. Two cartoons, Plane Crazy and The Gallopin' Gaucho, were made and given limited release, but they failed to impress audiences or find a distributor. For the third film, Steamboat Willie, they added a synchronized soundtrack. The addition of sound to the series paid off and made Mickey one of the most prominent cartoon stars of the time.

The early Mickey Mouse cartoons are some of the most prominent examples of Mickey Mousing ever done in a cartoon—it was done to the point where many, many cartoons were built solely around the novelty of the characters being able to tap or move to the beat of the soundtrack.

In his earliest shorts, Mickey was a roguish Anti-Hero, who had no problem drinking beer, smoking and stealing kisses from Minnie. Over the years, he evolved into a more boyish and meek personality with a sense of adventure and playfulness.

In 1935, Mickey's cartoons were upgraded to color, but his days as a headlining star in his own shorts were beginning to end—Pluto the Pup and newcomers Donald Duck and Goofy were soon dominating several of his shorts. This was because the storymen started to run out of ideas for how to keep Mickey's antics interesting through his increasingly softened personality, thus they had to fall back more on the characters that surrounded him to have anything to work with. On top of that, Fleischer Studios unleashed their newest star Popeye in 1933—a gruff, spinach-eating Anti-Hero whose cartoons took the nation by storm, quickly toppling the domesticated Mickey in popularity. Fortunately, Disney's Silly Symphonies kept the studio afloat, especially with the success of The Three Little Pigs that same year.

In 1940, Disney tried to give Mickey a comeback via the Sorcerer's Apprentice segment of Fantasia. Unfortunately, the film bombed and thus negated this comeback. During this time, Mickey was slightly redesigned to have more expressive eyes than before.

As time went by, Mickey's shorts became less and less frequent in number, overshadowed by his contemporaries and reduced to a bit player. While another attempt at a comeback was done via the Mickey And The Beanstalk segment of Fun and Fancy Free, it was once again a failure. In 1953, Disney finally retired Mickey, with the last of his original theatrical cartoons being The Simple Things.

For the next several decades, Mickey would continue to appear in television reruns, The Mickey Mouse Club, merchandise and the Disney Theme Parks in addition to still being the face of the company.

It wasn't until 1983 that he would make his cartoon comeback in the featurette Mickey's Christmas Carol. While that film was billed as Mickey's comeback, he was still reduced to a minor role as the character of Bob Crachitt, with Scrooge McDuck headlining the cartoon instead.

Mickey would cameo with Bugs Bunny in the hit 1988 feature film Who Framed Roger Rabbit.

In 1990, Disney gave him another featurette, The Prince and the Pauper, where Mickey received a central role in a cartoon for the first time in decades.

1995 proceeded to give us a Darker and Edgier update of the character, via the theatrical cartoon Runaway Brain, obviously borrowing influence from the more adventurous Mickey of the Floyd Gottfredson comics. Unfortunately, it caused a big stir among parents, causing the short to fall into company Discontinuity and Mickey's theatrical cartoon career was once again put on ice.

In 1999, Disney blessed Mickey with a TV revival called Mickey Mouse Works, later retooled into House of Mouse. Essentially lower budget versions of the original cartoons, both programs went on to be big hits.

In 2004, Mickey recieved a direct-to-video film along with Donald and Goofy called Mickey, Donald, Goofy: The Three Musketeers.

In 2010, Disney once again attempted a Darker and Edgier Mickey Mouse story, but this time with a video game—headlined by Warren Spector, creator of Deus Ex and System Shock and then-closet Disney fanboy. The video game, Epic Mickey, brought the mouse back to his roots, reuniting many of the classic Disney characters, including Disney's original cartoon star and Mickey's long-lost half-brother, Oswald the Lucky Rabbit. Critical reception was hit or miss, but the game was a hit, selling over a million copies on release. A sequel was made called Epic Mickey 2: The Power Of Two, but it didn't sell very well, causing Disney to close down Junction Point Studios so they could detour their gaming production elsewhere, ending the franchise.

The Epic Mickey series wasn't Mickey's only major contribution to the video game medium. In 1990, Disney licensed Castle of Illusion, developed by Sega for the Sega Genesis and Sega Master System. It was a 2D side-scrolling platform game with Mickey as the main character. The game became a major hit and is considered to this day as an all-time classic which even had a sequel: World of Illusion, released in 1992. He also plays a prominent role in the popular Kingdom Hearts series from Square Enix, in which he displays a Badass Adorable personality and Yoda-like combat skills.

In 2013, Disney hired Paul Rudish to produce a series of new Mickey Mouse animated shorts for Disney Channel, Disney.com and Disney's official YouTube channels. The first season began airing on Disney Channel on June 28th of that year, starting with "No Service". The show currently has four seasons and two half-hour specials with a fifth season is in the works. Every short made so far can be seen online here

Also in 2013, Mickey starred in a new theatrical short called Get a Horse!, a throwback to Mickey's early days as a scrappy barnyard character.

We can still hope that Mickey will go on and on into the future, to be loved by old and new generations.

Despite some people thinking differently, he and Minnie are, by word of their creator, actually happily married outside of their acting careers and just play whatever roles they need to play onscreen at the time. However, Walt did not confirm whether or not the two mice have any children.

His current official voice actor since 2009 is Bret Iwan in all productions except for the Mickey Mouse shorts, Mickey & Minnie's Runaway Railway, and The Wonderful World of Mickey Mouse, where he is instead voiced by Chris Diamantopoulos. Walt Disney himself was the original voice of Mickey, and Diamantopoulos's vocal portrayal is a throwback to Disney's portrayal. The most famous, and memorable, Mickey voice, however, has got to be the late Wayne Allwine, who voiced the iconic mouse from the mid-1970s' until Allwine's death in 2009.

Tropes that apply to Mickey: