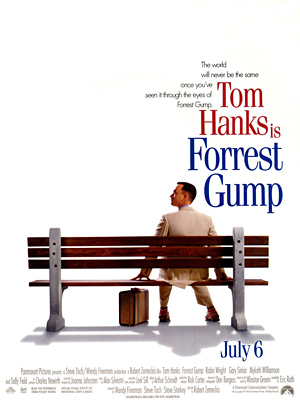 "Life was like a box of chocolates. You never know what you're gonna get."
"Hello. My name is Forrest. Forrest Gump."
Advertisement:

Forrest Gump is a 1994 film starring Tom Hanks and directed by Robert Zemeckis. It is based on the 1986 novel of the same name by Winston Groom.

It's the tale of Forrest Gump, a good-natured but simple-minded man from Greenbow, Alabama, telling his life story to other people while waiting at a bus stop. As the story continues, you find Forrest touching important events and people from the 1950s to the 1980s (ranging from Elvis Presley to several Presidents), rising to his own measure of fame and fortune in the process, mostly by just being himself. Because he is so simple-minded, he doesn't fully understand the significance of everything that he has done and just sees himself as an average person just living his life. But he's forever pining for his childhood sweetheart Jenny (played by Hanna Hall and Robin Wright).

Forrest's journey takes him from his native Alabama to the jungles of Vietnam, from walking in corrective leg-braces to running across North America, from misunderstood country boy to college football star to champion ping-pong player to shrimp tycoon, without ever quite losing the undying optimism of the era. On the other hand, Jenny's life takes her from a Catholic Schoolgirl to being in one of the early issues of Playboy, from a flower child of the '60s to a hippie protester of the '70s. Between her and Forrest, they cover all the significant cultural emblems of that time period, all the while their lives intersect with each other repeatedly.

Nominated for 13 Academy Awards, winning for Best Picture, Actor (Hanks), Director (Zemeckis), Adapted Screenplay (Eric Roth), Editing (Arthur Schmidt), and Visual Effects. It's worth noting that this film, along with Philadelphia, was largely responsible for audiences seeing Hanks as more than just a comedic actor, and led to a long string of critically acclaimed performances in dramas which continues to this day.

Groom published a sequel to the original novel, Gump & Co., in 1995, but due to Hollywood Accounting cheating him out of his fair share of royalties from the film's smash success, refused to license the rights to an adaptation, snarking that "I cannot in good conscience allow money to be wasted on a failure". Producers went ahead with sequel plans anyway, with a draft script being handed in on September 10, 2001 - when 9/11 happened one day later, the film's very '90s approach to referencing and commenting on past events instantly became dated and all sequel plans were dropped. As a result, the film is one of the most successful to never receive a sequel.

My momma always said, "Life is like a page of tropes. You never know what you're gonna get."

And that's all I have to say about that.
Feedback

Do not hit Jenny in front of Forrest Gump

Do not hit Jenny in front of Forrest Gump