The Hero of Tython

Voiced by: Kari Wahlgren (female Knight), David Hayter (male Knight)
"After years of training, I became a true Jedi. Now, I serve the Order and fight for the Galactic Republic to defeat those who seek to destroy it."

An extraordinarily talented Jedi Initiate sent to Tython as a Padawan to finish their trials and become a true Knight, the Jedi Knight is soon wrapped up in a Sith plot to annihilate the Jedi and the Republic. 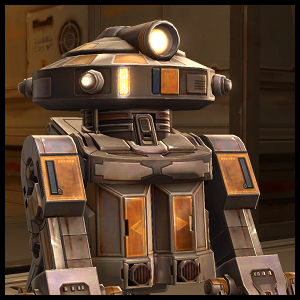 An astromech droid that's gone for centuries without a memory wipe, T7 is the first companion character for the Jedi Knight to be revealed and the first to join, on Tython. Mechanically, he was the Jedi Knight's ranged tank companion. 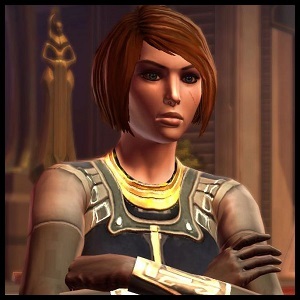 Voiced by: Laura Bailey
Ready for anything.

A female Human, and the Jedi Knight's Padawan. She is distinctly more carefree and relaxed than most Jedi, but hides a dark secret. She is actually a Child of the Emperor, part of a secret order of Sith created to be spies, telepathically-controlled puppet, and if necessary, a host-body for the Emperor's consciousness. She escaped from Korriban as a child when she started noticing missing time. She joins the Jedi Knight on Coruscant, and is the romance option for a male Jedi Knight. Mechanically, she was the class's melee damage companion. 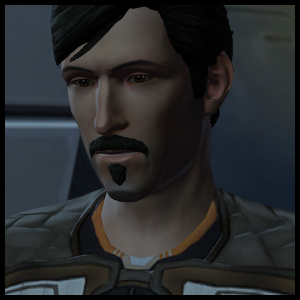 Voiced by: Andrew Bowen
Someone call a doctor?

A flirtatious human male medic whose life's work is bringing his great talents as a doctor wherever they're needed most, usually to civilians caught between the big factions in the war. He joins the Jedi Knight on Balmorra. Romance option for the female Jedi Knight. Mechanically, he was the Jedi Knight's healer companion. 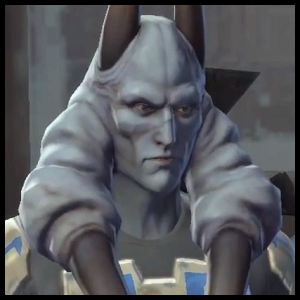 A male Chagrian Republic soldier, Sergeant Rusk is dedicated to the Republic and noted for his bravery... or recklessness, some would say, and Rusk is never one to back down from a fight or show signs of weakness, especially to the Empire. The Jedi Knight recruits him on Hoth. Mechanically, he was the class's ranged damage companion.

In Knights of the Fallen Empire, he's leading the Dead Men's Legion against Black Sun to protect Republic interests in Nar Shaddaa. 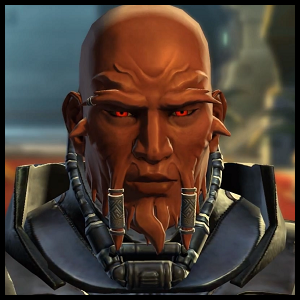 Voiced by: Joseph Gatt
Let us impart our will upon the galaxy.

A male Sith Pureblood and Sith warrior, Lord Scourge is the Emperors' Wrath, right hand and executioner of the Emperor. However, Lord Scourge can be redeemed - to a degree - on a special assignment after Hoth by the Jedi Knight. Mechanically, he was the class's melee tank companion. 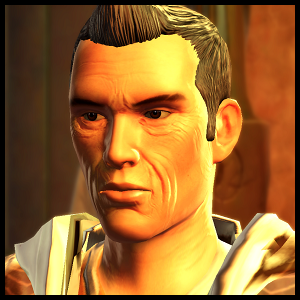 "A Jedi Knight is a weapon, just like a lightsaber. One hopes it's never needed, but it's always at the ready just in case."

A famous war hero among the Republic and respected Jedi Master. Orgus Din takes on the "Hero of Tython" as his first apprentice in years after he puts an end to a Dark Jedi plot. 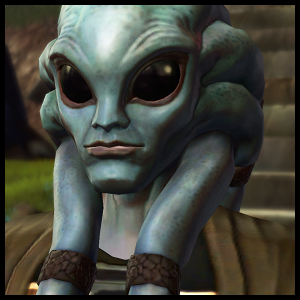 "Bengel was strong in the Force, and the most gentle being I've ever known."
—Orgus Din

Bengel Morr was Orgus Din's last apprentice. He was believed to have perished in the Sith Empire's destruction of the Jedi Temple. However he survived the tragedy, only to emerge from the ordeal a deeply troubled individual. 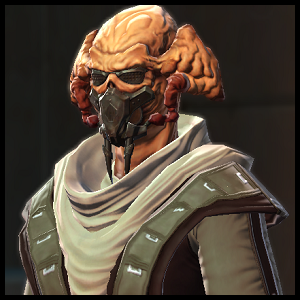 A Kel Dor Jedi Master and member of the Jedi Council who is legendary for his compassion. He strongly believes that no one is beyond redemption. He is the Jedi Knight's primary questgiver in Chapter 2. 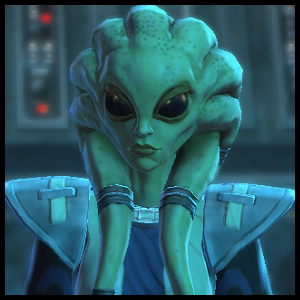 "Throughout history, certain droids have achieved well beyond their design limitations. I believe the force is the answer."

An eccentric Nautolan Jedi Knight who believes that droids can feel the Force. 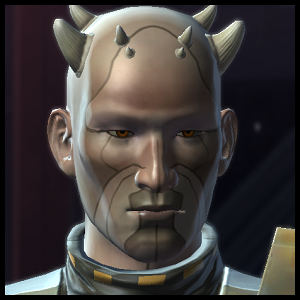 A Zabrak Jedi Knight who quickly develops a rivalry with the Jedi Knight PC after a botched mission.

A Jedi who fought in the early days of the war. Although he has led the Republic to many victories, his connection to the Force diminished due to a number of injuries he received. When the Treaty of Coruscant was signed, Sedoru dedicated himself to peace and gave up his rank of Knight. 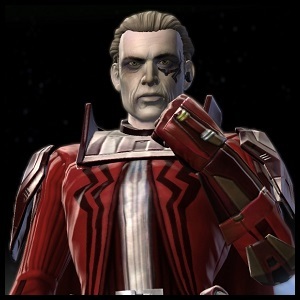 "Tell your pathetic Masters that Darth Angral has returned. This time, there will be no mercy."

A Sith Lord in charge of the fleet that sacked Coruscant, Angral famously stormed into the Senate and murdered the Supreme Chancellor, forcing the Republic diplomats on Alderaan to submit to the Sith's demands; the Treaty of Coruscant was signed. He is the father of Lord Tarnis, a Sith spy killed by the Jedi Knight on Coruscant, after which he swears revenge. 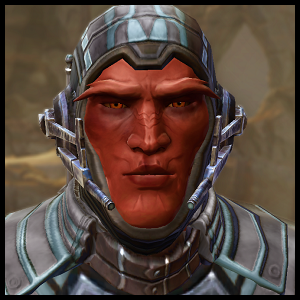 "My family is true Sith. My only passions are integrity and honor."

One of Darth Angral's apprentices. Praven is a Sith Pureblood with a firm belief in honor.

The most cunning of Darth Angral's apprentices, Nefarid makes up for his lack of power by using pawns and spies to carry out his schemes. 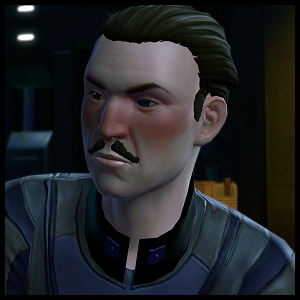 "My title is who I am. Any other name I gave you would be a lie."

Watcher One was an imperial agent tasked with recovering former Republic scientist, Dr. Nasan Godera. The agent was very wary of getting entangled in Sith affairs, believing such issues would bring about his ruin. 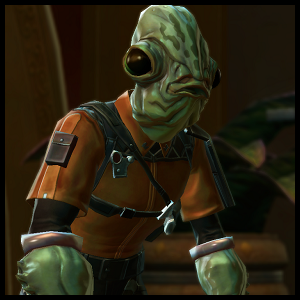 A Mon Calamari General who is one of the Knight's primary Republic contacts for Chapter One. 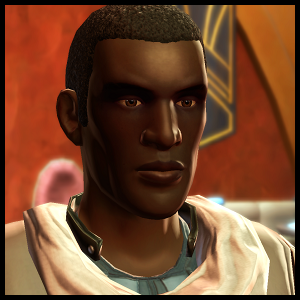 A human SIS agent who is assigned with preventing Darth Angral from gaining control over a secret Republic project on Nar Shaddaa. 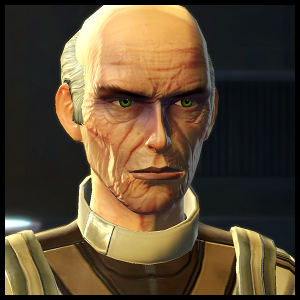 An eccentric scientist who hates the Empire so much that he considers the Republic to have committed treason against itself by signing the Treaty of Coruscant.

The Senator of the Corellian Sector. When the planet was conquered by the Empire, he was one of the few members of the Corellian government who was both free and loyal to the Republic, and aids the Hero of Tython and General Var Suthra in liberating the planet.