open/close all folders
Introduced in PaRappa the Rapper 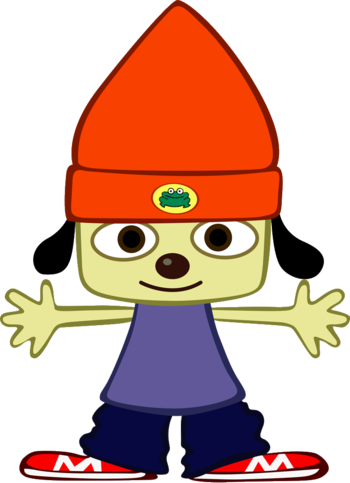 The main character in both PaRappa games, as well as an unlockable one in Um Jammer Lammy. He's a beanie-wearing dog and a skilled rapper, which ends up being very useful for many non-rapping tasks in the series.

PaRappa's animate boombox. His most important role is serving as the tutorial giver and Versus Mode emcee of PaRappa 2. 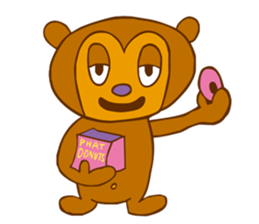 PaRappa's bear friend. He's a DJ with a huge appetite and a calm personality. 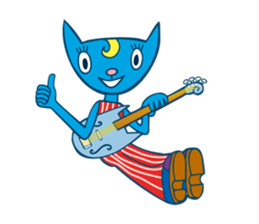 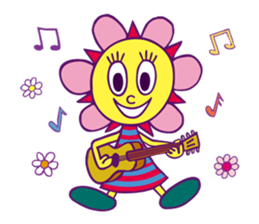 One of PaRappa's friends, a flower-person whom PaRappa happens to have a crush on. She's his major motivation for the entire series.

A stuck-up dog, and PaRappa's rival for Sunny's affections.

PaRappa's dad, and the only one of his parents that is seen.note At least, the only one who's seen interacting with PaRappa in the games. According to the comics and Word of God, the blonde firefighter in the background of Um Jammer Lammy's second stage is actually PaRappa's mother. 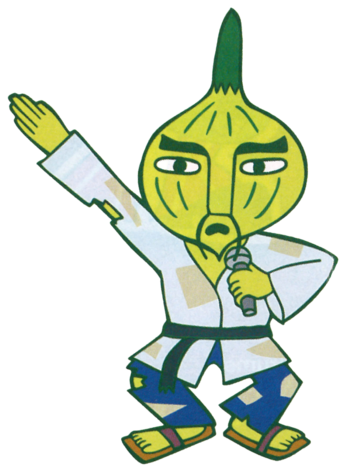 "Kick, punch, it's all in the mind..."
A karate master with an onion as a head. He teaches PaRappa his skills in the first stage of the game. He returns in the later games as well; as a singer (in a dream) and sort-of mental adviser to Lammy in Um Jammer Lammy, and as a TV show host in 2. 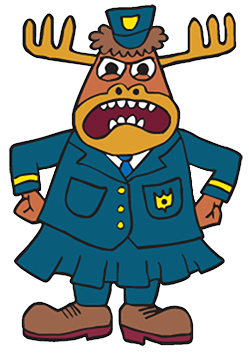 A moose driving teacher. She helps PaRappa gain his driver's license in Stage 2 of the first game. 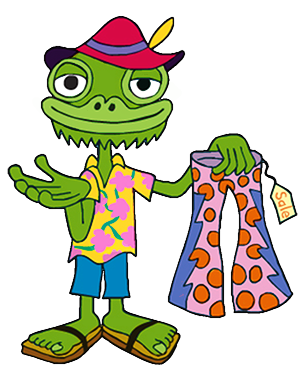 "I'm workin' in the flea market so early, I've been workin' here since my mama was a baby..."

A frog that runs a flea market. The teacher of Stage 3, where he helps PaRappa pay for his dad's car, which he ended up destroying very quickly.

"The other day I was called a little turkey. But I'm a chicken. Got it, you beef jerky?"

A chicken who runs her own cooking show. The teacher of Stage 4, where PaRappa watches her so he can make a seafood cake for Sunny's birthday (having lost the one he bought thanks to Joe Chin).

"Everybody, I'm wondering how you're feeling out there, you feelin' good?"

A bug who hosts Club Fun. Appears in the finale of both PaRappa games.
Introduced in Um Jammer Lammy 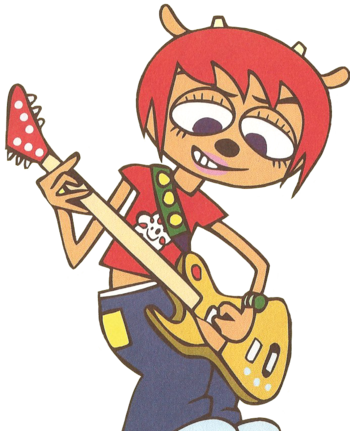 The main character of Um Jammer Lammy, and a recurring one in PaRappa 2. She's the guitarist of MilkCan, an all-girls band. The events of her game revolve around her race to get to her concert in time.

A mouse-creature with a stick of dynamite in her head that serves as the drummer for MilkCan. 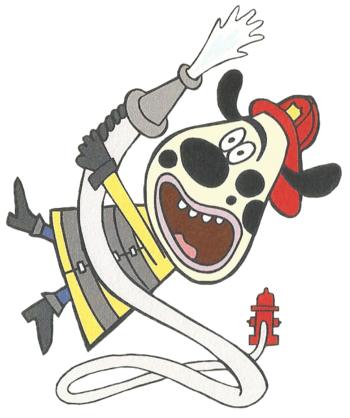 "If you don't think you're the one, fireman's daily work can't be done!"

A dalmatian who works as a fire department. Serves as the teacher for Stage 2, since the fire he's dealing with is right in the way of Lammy's path to her concert. 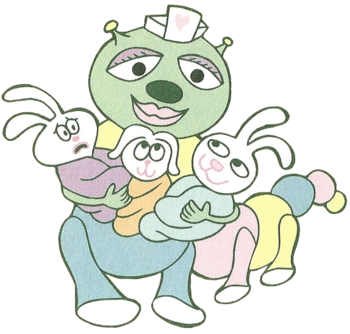 "Now put these kids to sleep, will ya?"

A caterpillar who works at a daycare of sorts at a mall. After letting Lammy in the mall due to assuming she's pregnant, she gets her help in putting the babies to sleep. The teacher of Stage 3, but not the singer; that's done by the baby she's holding. 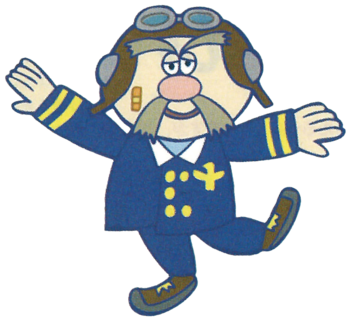 A plane pilot who pilots the plane to where Lammy's concert is. Due to being constantly struck of the head by a circuit panel (which also switches his personality with every hit), he requires Lammy's help in flying the plane. The teacher of Stage 4. He reappears in PaRappa 2 as the manager of the save data and options menu. 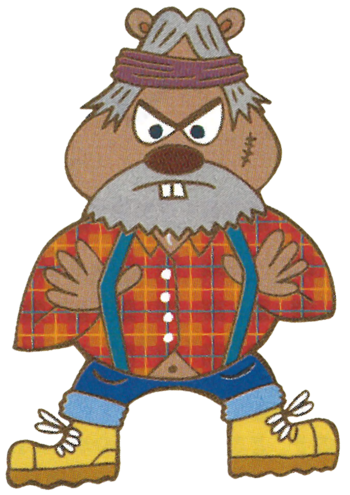 "Chop all of them down, every single one down, then we're gonna make a good guitar with all the timber around!"

A woodsman whom Lammy goes to in order to get a new guitar. The price; Lammy has to help him chop wood for it. The teacher of Stage 5. 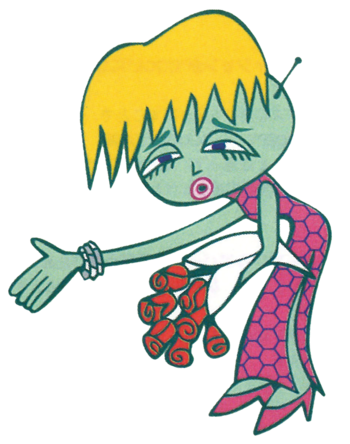 "Somebody come and rescue me before an angel comes to take me 'round and 'round!"

An idol who is singing at a concert in Hell/a tropical island. Due to her guitarist having a resemblance to Lammy, Lammy has to perform with her in Stage 6 in order to get back to her own concert. 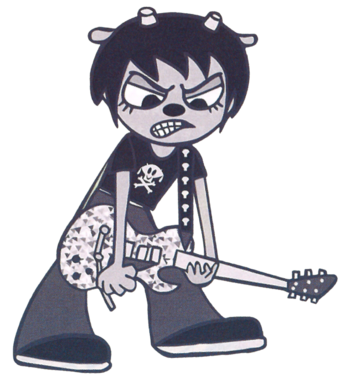 Another guitarist with an odd resemblance to Lammy. She was supposed to perform at Teriyaki Yoko's concert, and vows to get revenge on Lammy for taking her place. This sets up the multiplayer mode's plot, where she's the second player's character.
Advertisement:
Introduced in PaRappa The Rapper 2 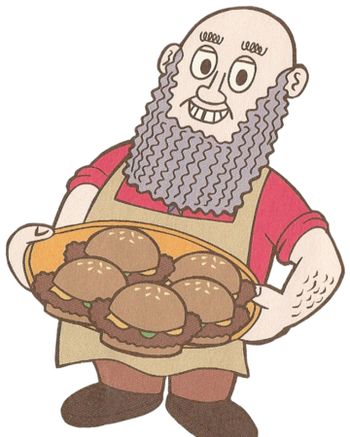 "Extra! Extra! Read all about it! The best burgers in town from all around!"

The founder of Beard Burgers, a restaurant home to the best burgers in town. Has died before the story began, but when his son fails to keep making burgers, he comes back as ghost to teach PaRappa how to do it. The teacher of Stage 1. 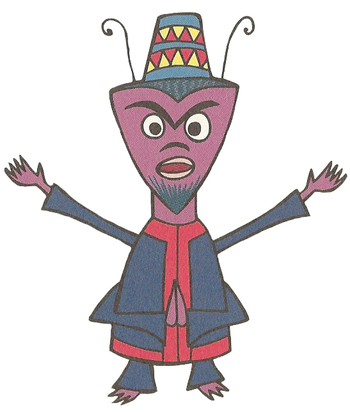 "Revolutions all the time, people changing the world with crime..."

A calm and collected (most of the time) ant, who, in a rarity for this series, is actually the size of a real-life ant. He's the teacher of Stage 3, where he helps PaRappa and his gang get back to their normal size. 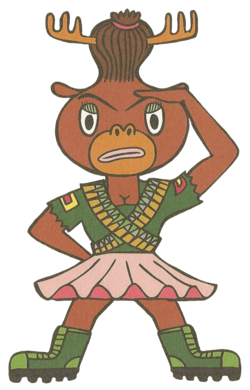 "Remember, never go down without a fight!"

A moose trainer for the recruits of General Potter's army. She is the teacher of Stage 4, where she trains PaRappa to take on Colonel Noodle. 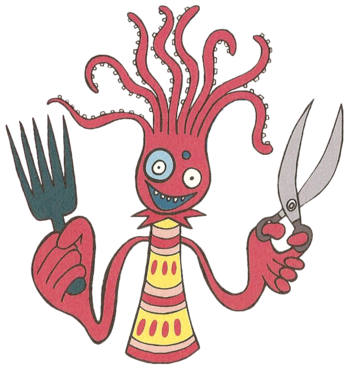 "Cutting hair can be fabulous!"

A octopus barber who's well known for his skill. However, thanks to a device made by Colonel Noodle, he's become obsessed with giving everyone afros that can grow to massive sizes. The teacher of Stage 5, where he promises to restore everyone's hairdo's if PaRappa proves his skill as a barber. 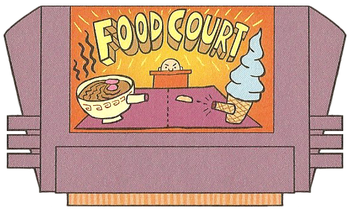 "Watch out for those flying noodles, 'cause if you don't do well here, all you get to eat are noodles."
A haunted game powering Colonel Noodle's noodlizing machines, it was pulled off store shelves for its tendency to curse anyone who loses to it into eating nothing but noodles for the rest of their lives. Unluckily for PaRappa, he's the only one who can enter the game and try to beat it to discover the Noodle Syndicate's weakness. 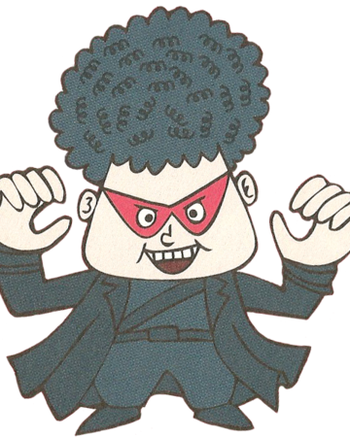 "I represent for noodles, baby!"

A mysterious man, with the plan to turn all the world's food into noodles, forcing everyone to eat noodles only, and serves as the "teacher" of Stage 7. This is because he's the Beard Burger Master's son, who has been forced to eat burgers for his entire life, and wants to get revenge by doing that to everyone else.
Introduced in the Anime

A blonde dog who is introduced as a friend of PJ's.

A tomboyish fox who is often The Rival to Katy.

An unscrupulous purple rabbit who often tries to steal things.

A tabby cat who is Gaster's partner in crime.

A cute pink bear who is in love with PJ.