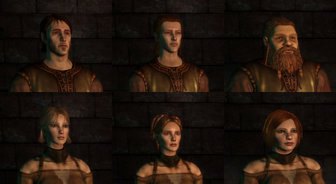 Some of the Warden's possible faces.

The main protagonist of the game. You become a Grey Warden after going through a unique origin story tailored to your race and background. Afterwards, you go to Ostagar in order to join King Cailan in a supposedly final battle against the Darkspawn. You also need to undergo The Joining, a ceremony in which you are initiated into the Grey Wardens.

Things in Ostagar don't go exactly as planned, so the Warden, along with Alistair, Morrigan, and others who join you along the way, goes off into Ferelden in order to gather armies against the Blight.