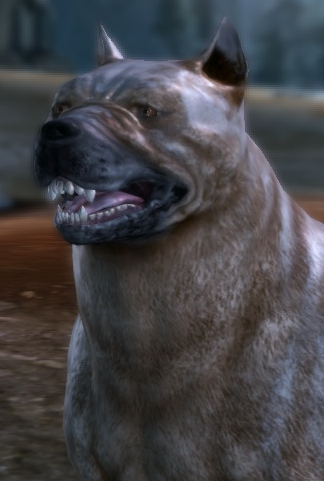 "Woof!"
"Mabari are at least as smart as your average tax collector!"
— Ostagar kennel master

The faithful Mabari hound of the PC with human-level intelligence and a mean bite. Can be cute when he needs to be, though; even Morrigan is moved by his puppy eyes once. The player may give Dog any name they wish, but according to writer Mary Kirby, his official name is Rabbit. 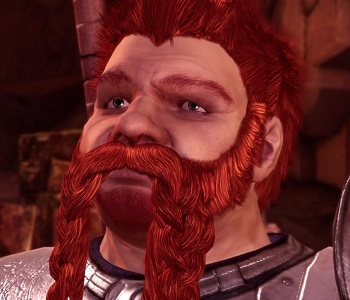 Voiced by: Steve Blum
"If you've ever heard of me before, it's probably all been about how I piss ale and murder young boys who look at me wrong. And that's mostly true."

A former dwarf warrior from Orzammar, Oghren is now best known for his drinking and the fact that he was forbidden to carry weapons; a great insult to his status. He was shamed when his wife Branka left with their entire clan to search the Deep Roads for something important to her, leaving only him behind. Shale's nickname for him is "The Drunken Dwarf." He returns in Awakening, where he becomes a Grey Warden himself. 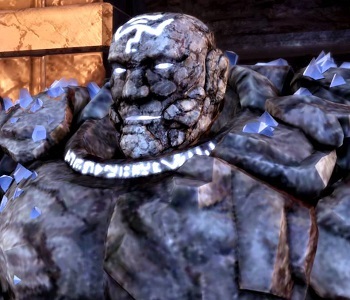 Voiced by: Geraldine Blecker
"The darkspawn are an evil that must be destroyed, it's true. Though not as evil as the birds... damnable feathered fiends!"

A Golem of the old dwarven kingdoms who was found by a human mage called Wilhelm in the Deep Roads and brought to the surface. Shale was paralyzed after killing Wilhelm and has spent the last thirty years frozen as a statue in the village of Honnleath, completely conscious but unable to move. Abhors birds above all else because of it. 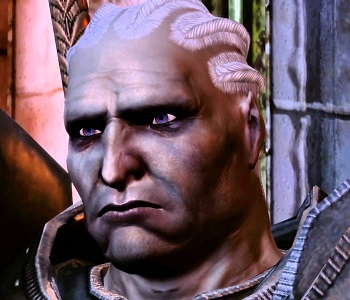 Voiced by: Mark Hildreth
"The Arishok asked 'What is the Blight?' By his curiosity, I am now here."

A Qunari warrior sent to scout out the situation in Ferelden, Sten slew a whole family of farmers that saved him from death. Now he is imprisoned in Lothering by the Chantry, where the priestess might be persuaded to release him into Grey Warden custody. Shale has no nickname for him beyond "Qunari," but Sten refers to the golem as "Kadan."

Morrigan
See more information about Morrigan in this page.
Wynne 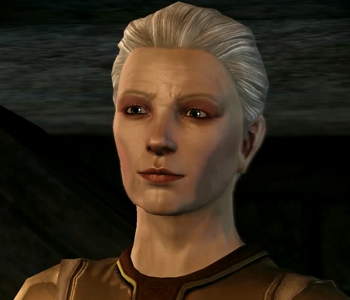 Voiced by: Susan Boyd Joyce
"I'm not the sort of person that leaves things unfinished. I'll see this through, I promise."

A senior enchanter of the Circle of Magi, Wynne is a notable voice among the mages, preferring action over sitting around in the Tower. Prior to the start of the game, she is among the mages who volunteer to go to Ostagar and battle against the darkspawn; later, the PC meets her during the "Broken Circle" quest, where she eventually joins the party. Shale's nickname for her is "The Elder Mage," much to her chagrin.