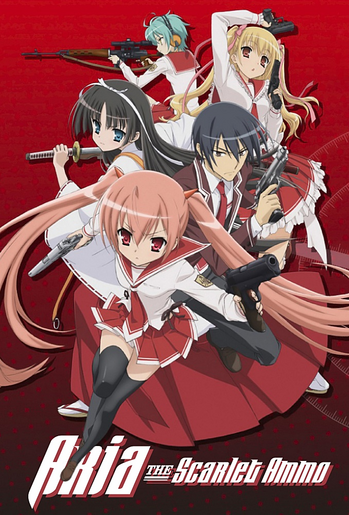 Hidan no Aria (Aria the Scarlet Ammo, according to the subtitle, or more accurately Aria of the Scarlet Bullet note The reason and meaning behind this translation is a spoiler. Look for it somewhere on this page) is a Harem Genre series of Light Novels, but also with plenty of action and thrills. The light novels began publication in 2008, with a manga adaptation that began serialization in Monthly Comic Alive in 2009. It also has an anime series adapted by JC Staff, which was released in April 2011. (Note that after volume 16, the manga's numbering starts over from 1, with the new part being called Hidan no Aria Spark Out - The Purple Lightning Witch, and chapter 94 becoming "chapter 1" of this new part.)

The light novel series is still ongoing and its ending is not yet in the horizon, making it a significant Long Runner. As a consequence, Aria has the interesting distinction of being currently the longest major Shana Clone series (actually much longer than the original Shakugan no Shana) and the only one that is still running.

From 2010 to 2018, it also had a spinoff manga, Hidan no Aria AA (Hidan no Aria Double A, or Aria the Scarlet Ammo Double A), focusing on Akari Amamiya, a first-year Rank-E Butei and Aria fangirl who strives to be on equal footing with her beloved "Aria-sempai". This spin-off also got its own anime adaptation in 2015 by Dogakobo; the first preview can be watched here

Spoilers for all three mediums are here!