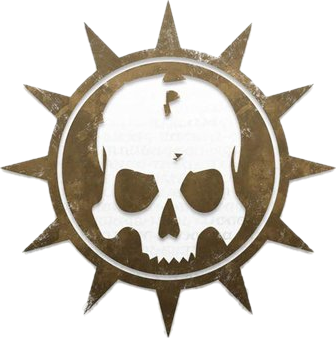 Nagash, the God of the Dead, attempts to claim the souls of all mortal beings after death and sees it as his right to mould them as he sees fit, forging them into armies of the undead to make his dream of a kingdom of the dead that stretches across all the Mortal Realms a reality. 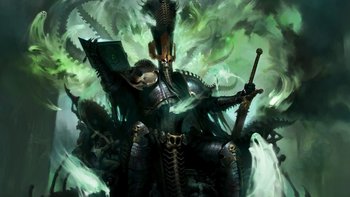 A near endless tide of walking corpses, skeletal horrors, ethereal nightmares and blood-drinking abominations, the armies of the Supreme Lord of the Undead march relentlessly across the realms to subjugate living the lands of the living. The forces of Nagash are normally split into individual Legions, each headed by one of Nagash's Mortarch lieutenants, and each with their own specialities and skill. The Legion of Night headed by Mannfed von Carstein specialises in martial skill and the spreading of terror, while Neferata's Legion of Blood prefers to use infiltration, corruption and complex plans to weaken the enemy before crushing them on the battlefield. The magical might of the Arkhan the Black's Legion of Sacrament meanwhile only undertake the most crucial and sensitive of missions. Should overwhelming power be necessary, however, the Legions will be drawn together into a Grand Host of Nagash lead by the Great Necromancer himself.

Answering to none but the Supreme Necromancer himself, the Deathlords are Nagash's mightiest lieutenants and the commanders of his Legions. Mighty warriors, magic users and rulers in their own right, and protected by the Morghast royal guards, the Deathlords are a terror on the battlefield but all are bound to the Supreme Lord of the Undead through his powerful magic, existing only to bring about his greatest wish, the creation of a kingdom of unlife across all the Mortal Realms. 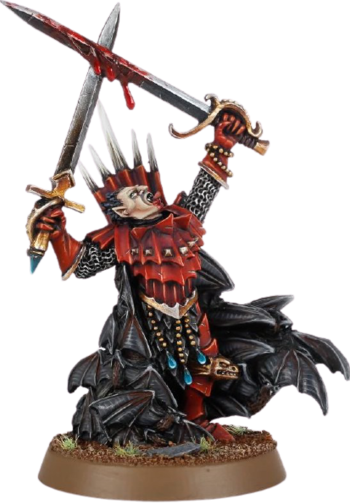 Soulblight vampires stand amongst the elite of Nagash's Legions. Once mortal beings, these aristocrats and knights have been afflicted by the Soulblight Curse becoming powerful undead creatures that retain the illusion of their former life. Granted increased speed, strength, magical power and eternal life by the Soulblight Curse, these vampires suffer from an terrible thirst that can cause them to devolve into hideous monstrosities if they are unable to imbibe enough fresh blood. 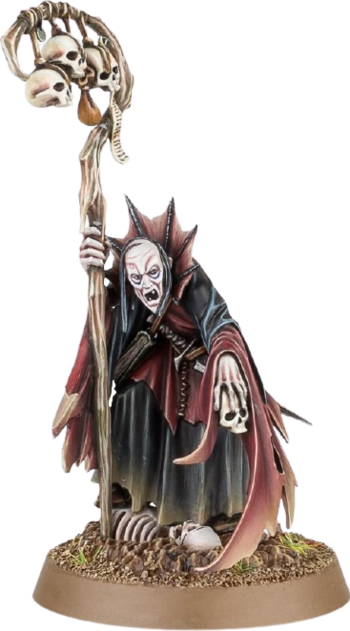 The scholars and mystics who seek power through the mastery death magic, Deathmage necromancers use the secrets of the Realm of Shyish to fulfil their own dark desires. Whether they originally intended to bring a dead loved one back to life, or to raise armies of the dead to destroy their enemies, they soon become infused with the magic of death, developing a loathing of all living things and giving up their mortal soul to Nagash in exchange for fearsome power. 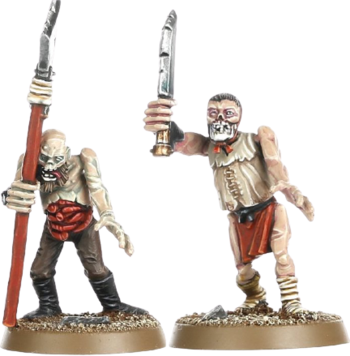 The most common form of undead to plague Mortal Realms, Deadwalker zombies are raised by Deathmage necromancers and Soulblight lords to act as cannon fodder in their armies of death. Large concentrations of death magic can also cause uncontrolled packs of Deadwalker zombies can also be found shambling across the landscapes of the Mortal Realms, their numbers growing whenever they encounter the living. 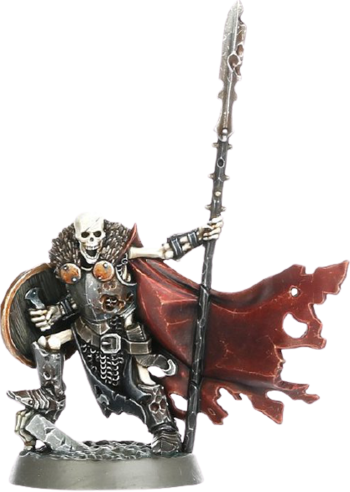 The undead remnants of ancient empires, the Deathrattle kingdoms wage war against the living that now inhabit their former territories. The skeletal legions of these empires are driven to battle by the undying ambitions of their Wight Kings as they attempt rebuild the former glory of their lost kingdoms.

Nagash, Supreme Lord of the Undead

"Nagash is death, and death is without mercy, honour or pity!"

The God of Death and the absolute master of all undead creatures, Nagash was once mightiest undead magician of the world-that-was and the very creator of necromancy. A jealous god, Nagash claims dominion over the souls of all mortal creatures that die within the realms and despises anyone who would deny him his due, be they the Dark Gods of Chaos or the God-King Sigmar. From his throne within the fortress-city of Nagashizzar at the heart of Shyish, the Realm of Death, Nagash makes his plans to spread the absolute order of death to all the Mortal Realms.

Arkhan the Black, Mortarch of Sacrament 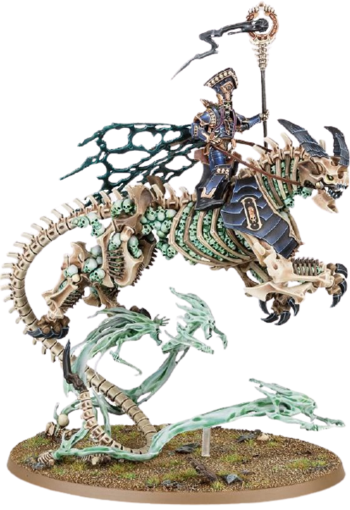 Nagash's most trusted and loyal follower, Arkhan was one of the Great Necromancer's followers when they were both mortal humans on the world-that-was and is privy to many of his master's greatest secrets. As an undying liche, Arkhan is second only to Nagash in necromantic ability and serves as his most trusted general, leading the Legion of Sacrament or the Null Myriad, his personal legion of Ossiarch Bonereapers, on the most delicate of missions for the Lord of Undeath. 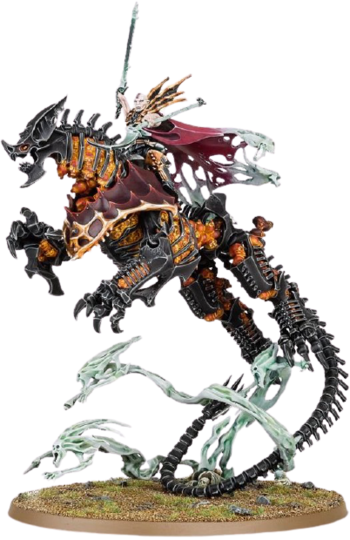 The Mortarch of Night, Mannfred von Carstine is a cunning and ruthless Soulblight vampire who rules the underworld kingdom of Carstinia. Chafing under Nagash's rule, Mannfred has betrayed the Great Necromancer on a number of occasions and has suffered harsh punishment for his impudence, only to be returned to his former position as his skill on the battlefield proves invaluable. Leading the Legion of Night, Mannfred spreads terror across the Mortal Realms in the name of Nagash, all the while continuing to plot against his master. 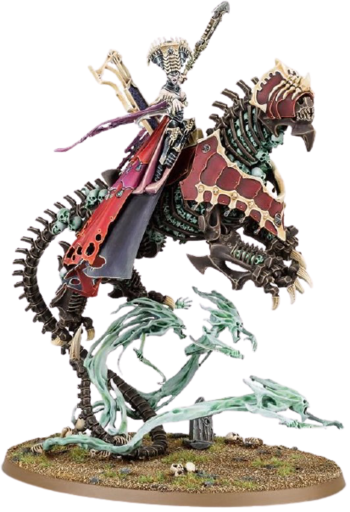 Beautiful as she is deadly.

The powerful and seductive Neferata was the first vampire, and the ultimate origin of the Soulblight curse, who remembers a time on the world-that-was when the Great Necromancer still lived a mortal life. Neferata rules over the kingdom of Neferatia with subtlety and manipulation, encouraging the vampires of her court to indulge in intrigue and conspiracy to keep any one of them from becoming too powerful. While she prefers to fight with lies and illusions, Neferata doesn't shy from battle capable, personally leading the Legion of Blood against the enemies of Nagash while using her transfixing beauty and necromantic might to defeat her opponents. 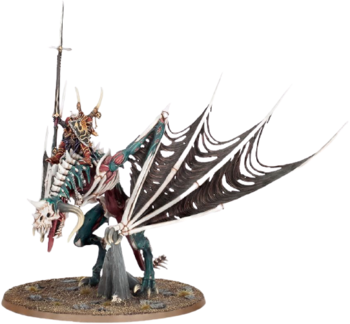 A powerful Soulblight general, Prince Vhordrai attempted to destroy Nagash during the Age of Chaos but failed and was imprisoned for his treachery. After Nagash's resurrection, the God of Death released the half insane vampire, cursing him to be bound to the Crimson Keep, a dread castle that can appear anywhere within the Mortal Realms. Now Vhordrai is forced to fight the enemies of Nagash wherever the Keep materialises, only capable of leaving the fortress for a single day to destroy the living before returning and traveling to the next battlefield. 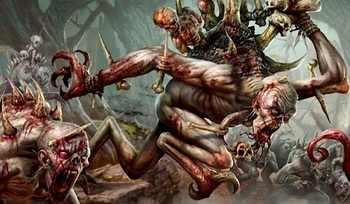 ARGLARGHARAGAH!Translation I say, good chap, it is a most splendid day to get into battle against some uncivilized brutes, don't you agree?

The degenerate, cannibalistic remnants of nation that fell to ruin during the Age of Chaos, the Flesh-eater Courts are morbid reflections of the glorious civilisations that they once were. Infected by the insanity of their cursed vampiric monarchs, the Flesh-eater Courts consist of twisted sub-human cannibals and monsters who believe that they are the noble knights and soldiers of their lost civilisation kingdoms, protecting their citizens against beasts and invaders.

Known by many names throughout the Mortal Realms, the Carrion King was once one of the most loyal and favoured followers of Nagash who, nonetheless, fell afoul of the Great Necromancer's temper and was transformed into a hideous and twisted creature. In retaliation for this curse, the Carrion King turned against the God of Death and was eventually imprisoned for the destruction he caused within Nagash's domains. Driven mad by his imprisonment, the Carrion King was inadvertently released by Sigmar during the God-King's invasion of the Realm of Shyish at the beginning of the Age of Chaos, and he soon began rebuilding his royal court, spreading his madness to his followers and the mortal cannibals that he came across.

As the Age of Chaos wore on, the followers of the Carrion King became prospered, but the mad monarch himself was seen less and less and none now know where he resides. In the wake of the Shyrish necroquake, however, deranged rumours of a mighty lord with many names ruling a kingdom on the edge of the Realm of Death have begun to circulate. 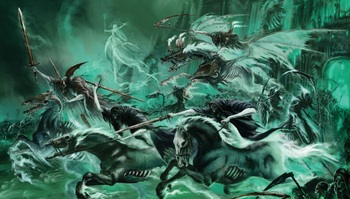 The malignant spirits of the Nighthaunt hosts are a plague upon the Mortal Realms. These armies of ethereal undead howl across the land, searching for fresh souls to send to the underworlds that they themselves have escaped. 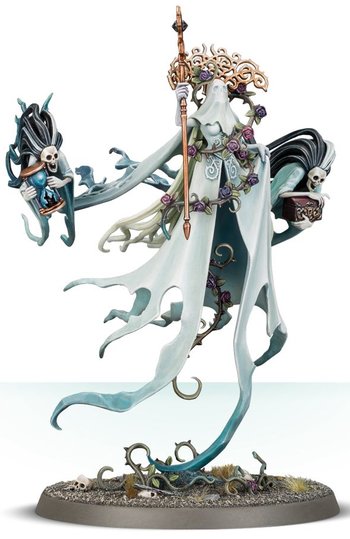 "Do not resist. Death is inevitable. The more quickly you succumb, the sooner your suffering will be over. Come to me, and be mine for evermore..."

In life, Olynder was a famously beautiful women who came to rule the Shyishan empire of Dolorum after her fiancee and father-in-law died under mysterious circumstances. When Dolorum came under attack by the forces of Nurgle during the Age of Chaos, Olynder tried to bargain with the forces of the Plague God only for Nagash to transform her into a ghostly spectre who would continually feel the grief of the dead from across the Mortal Realms. After the Necroquake, Nagash raised the Vailed Lady to the rank of Mortarch and granted her command of the Nighthaunt spirits. 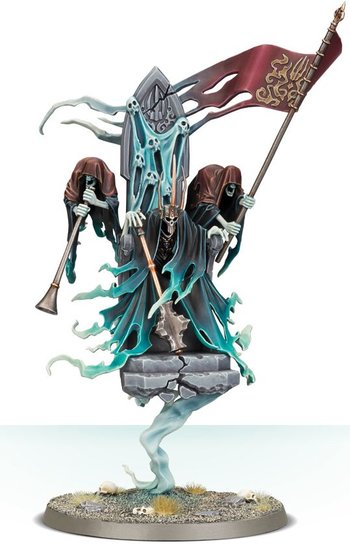 An ambitious and highly competent strategist, the living Kurdoss Valentian betrayed his way to the throne only to be struck dead by Nagash for worshipping the God-King Sigmar. As an undead wraith Kurdoss retained his limitless ambition, eventually impressing the God of the Dead enough that Nagash bound him to Lady Olynder, Mortarch of Grief, to act as her general. 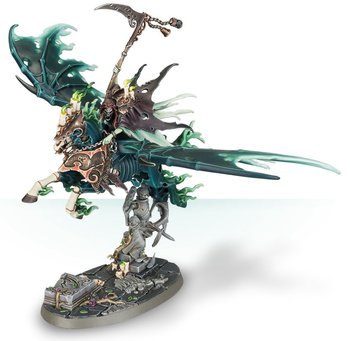 Once a powerful wizard-king with a deep understanding of death magic, Nagash trasformed Reikenor into a powerful wraith who hunts down those that have incurred the wrath of the Great Necromancer. 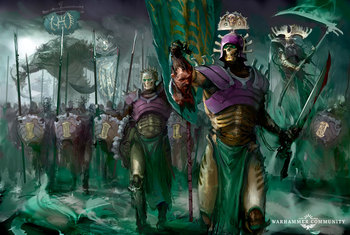 "The Tithe has come. Will you pay? Or will you serve?"

Artificial constructs of bone possessed by modified souls, the Ossiarch Bonereapers are a form of undead specifically designed for war. Created during the Age of Myth as Nagash's perfect warriors, but they were not fully unleashed until the Necroquake flooded the Mortal Realms. Now the Ossiarch legions march to war and the only way to stay their hand is to pay the Tithe of Bone and surrender the skeletal remains of the dead. 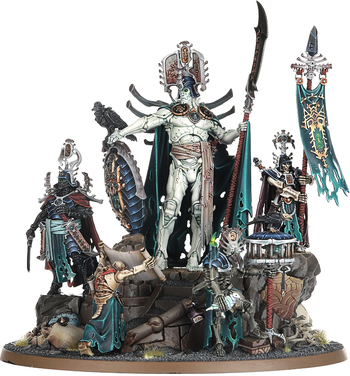 "You will pay Nagash's Tithe, or your bones will serve us forevermore!"

A mighty warrior and masterful general in both life and death, Katakros once fought against Nagash's forces before willing submitting to his rule when he faced the Great Necromancer himself. Impressed by Katakros' genius, and lack of ambition beyond the field of tactics, he elevated the general to the rank of Mortarch and granted him strategic command of his armies. Katakros fought against Sigmar when the God-King invaded Shyish at the dawning of the Age of Chaos and was imprisoned within the Midnight Tomb Stormvault until he was freed by Lady Olynder in the wake of the Necroquake. Returning to his master, Katakros was given command of the Ossiarch legions, and now leads them against the enemies of the God of Death. 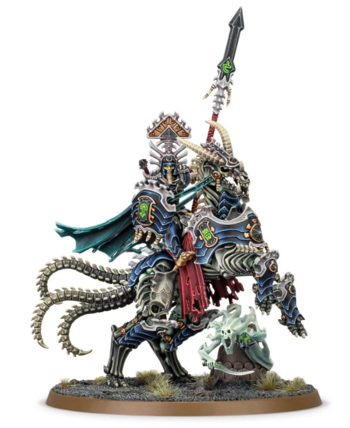 The Dark Lance of Ossia

When he was alive, the mortician-assassin Patu Zandtos was Katakros' second-in-command, and most talented generals. The Mortarch of the Necropolis valued his lieutenant so much that when he was remade as a mighty Liege-Kavalos, Katakros allowed Zandtos to retain the majority of his personality intact. Zandtos possesses an eternal hatred of the living and fights to eradicate every mortal within the Realm of Death. 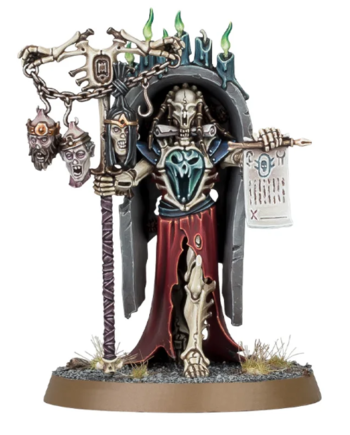 Given great authority by Nagash himself, Vokmortian is charged with organising and overseeing the Bone-Tithe, a tax Nagash has imposed on the living for their continued existence. As one of the God of Death's most favoured emissaries, the Master of the Bone-Tithe commands an elite Tithe Legion with which he wiped empires from the face of the Mortal Realms.