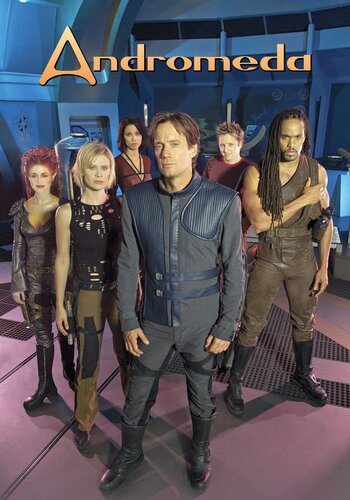 The main cast. (L-R: Trance Gemini, Beka Valentine, Rommie, Capt. Dylan Hunt, Seamus Harper, Tyr Anasazi.)
The long night has come. The systems commonwealth - the greatest civilization in History - has fallen. But now, one ship, one crew has vowed to drive back the night and rekindle the light. On the starship Andromeda, hope lives again.
— Opening Narration
Advertisement:

Some view Space Opera Gene Roddenberry's Andromeda as an unbranded Star Trek series. It is perhaps more accurately described as Star Trek in reverse. The show lasted from October 2000 to May 2005.

The story opens aboard the titular starship, the Andromeda Ascendant, a "warship of the line" for the Systems Commonwealth, a government founded by a race of Sufficiently Advanced Aliens called the Vedrans, which kept the peace among their worlds spanning three galaxies—emphasis on the past-tense. Though their technology was vast and their captains were noble and compassionate, they ran into a mess of problems all at once. First a race of cannibalistic savages known as the Magog invaded by the billions, wiping out entire Commonwealth worlds. And just after fighting the Magog to a standstill and making a peace treaty with them, one of the Commonwealth's member races rebels, the fractious Nietzscheans, genetically engineered humans obsessed with eugenics and following the chilly philosophy of Friedrich Nietzsche. The first battle of the Nietzschean Rebellion ends up with the Andromeda evacuating its crew and trying a slingshot around a black hole to escape, freezing ship and captain in time.

Three hundred years later, the Commonwealth is a distant memory, and a dark age has fallen over the known worlds. The Eureka Maru, a salvage ship crewed by a rag-tag team of minor-league criminals, happens upon the Andromeda and tows it to safety, thinking this will be the score of a lifetime. Mostly through his own strength of character, the revived Captain Hunt convinces the crew of the Maru to join him and try to re-unite the Commonwealth (or, at least, try to be of marginal assistance to his quest as they mooch off the Andromeda's resources).

The show has its origins in a combination of two separate Roddenberry story ideas from the 1970s, one about a sentient starship and a second about a man from the past trying to piece the remnants of civilization back together after it has crumbled - essentially, "What if The Federation fell?". The former never made it to the air prior to Andromeda, but Roddenberry (who died in 1991) used the latter concept in no fewer than three separate unsuccessful pilots (two of which actually included a protagonist named Dylan Hunt) before giving up on it. Undoubtedly these ideas were further developed by the Andromeda creative team. As a consequence, it's difficult to see Roddenberry's hand in this hard-boiled, dystopian future. Andromeda also had a spiritual bent unlike anything seen in Trek, except perhaps in the God Guise aliens of Star Trek: Deep Space Nine.

The initial core crew is, approximately, The Team:

Midway through the second season, the showrunner has a falling out with the male lead and is replaced. Rev Bem leaves the ship when his actor develops an allergy to the Magog makeup. This is when things start to get a little zany. After the third season, Tyr Anasazi is replaced by Telemachus Rhade, the Identical Grandson of Hunt's original first officer. This is when things get a little more zany.

In the universe of Andromeda, every celestial body has an "avatar", a humanoid counterpart of vast power. Such beings crop up from time, including the moon of Tarn Vedra, the black hole (who turns out to be the universe's greatest clingy ex-girlfriend), and, most importantly, Trance, who, it is eventually revealed, despite her youthful appearance and character, is the wayward sun of Tarn Vedra, the oldest star in the universe. Halfway through the second season, Trance is replaced by an older and moodier version of herself (not an other Darrin; it's the same actress in different makeup).

For most of the series, an approaching Magog worldship serves as an impending Dragon, guided by The Man Behind the Man, a shadow-cloaked avatar known as "The Spirit of the Abyss", a powerful chaotic force. When this comes to a head in the fourth season finale, Dylan is forced to escape through a Negative Space Wedgie to the timeless, isolated Seefra system, really the massively transformed Tarn Vedra system.

Andromeda was inordinately fond of the Negative Space Wedgie, depicting a universe rife with temporal anomalies — in fact, the Andromeda Ascendant itself incorporated dimensional anomalies into its very construction. For a starship crew the cast also spent a great deal of time underground, presumably because somebody in the first season invested money in a tunnel set that had to be re-used over and over again.

In addition to the obvious Star Trek parallels, Andromeda clearly owes a lot to Blake's 7.

Technically set approximately 3 millennia into the future (Figure from ep. Harper^2), though effectively A Long Time Ago, in a Galaxy Far, Far Away...: Earth exists, but is hardly ever mentioned, except to say that it's not a very nice place to hang out these days.

Sometimes described as "Herc meets Kirk", because Kevin Sorbo, best known for his role as Hercules in Hercules: The Legendary Journeys, is playing the role of a kind, wise and mysteriously super-strong character in the role that Captain Kirk filled in the original series of Star Trek, which this show so closely resembles.