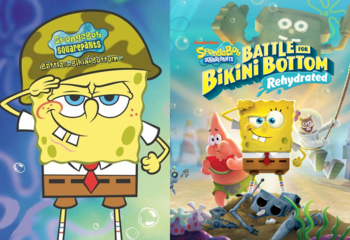 SpongeBob: Say Bubble Buddy, why do I have to pay all of these golden spatulas to these toll booths?
Bubble Buddy: Because, SpongeBob.
SpongeBob: Well, can't argue with that.
Advertisement:

SpongeBob SquarePants: Battle for Bikini Bottom is a licensed game produced by Nick Games and THQ, and developed by Heavy Iron Studios in 2003 for the PS2, Nintendo GameCube, and Xbox. The Microsoft Windows and Game Boy Advance Reformulated Games were developed by AWE Games and Vicarious Visions respectively.

The basic plot involves Plankton creating the Duplicatotron 3000; a device that generates a robot army to steal the Krabby Patty formula for him. Unfortunately, he forgets to set one of the device's switches to "Obey" and the robots begin running amok, spreading havoc across Bikini Bottom. It's up to SpongeBob, Patrick and Sandy to defend the town against the robot menace and fight their way into the Chum Bucket to shut them down.

The gameplay is a staple 3D platformer in the vein of Super Mario 64 and Banjo-Kazooie—have SpongeBob, Patrick and Sandy travel around several different levels spread throughout Bikini Bottom. They battle Plankton's robot cronies and solve obstacles and puzzles while collecting Golden Spatulas to help you get around.

THQ Nordic released a HD remake called SpongeBob SquarePants: Battle for Bikini Bottom – Rehydrated on June 23, 2020 for the Nintendo Switch, PlayStation 4, Xbox One, and Windows.note The original PC version of the game was actually a Minigame Game, not a port of the console versions, so this is the first time PCs get a version of the original 3D platformer. The remake was developed by Purple Lamp Studios, and boasts a massive graphical overhaul and a host of quality-of-life improvements, while also adding a new multiplayer mode with exclusive playable characters and assets based on content cut from the original version. A mobile port of the remake for iOS and Android, developed by Handy Games, was released on January 21, 2021.

On September 17, 2021, a Spiritual Successor, entitled SpongeBob SquarePants: The Cosmic Shake, was announced. The developers behind Rehydrated, Purple Lamp, will be returning to make the game.