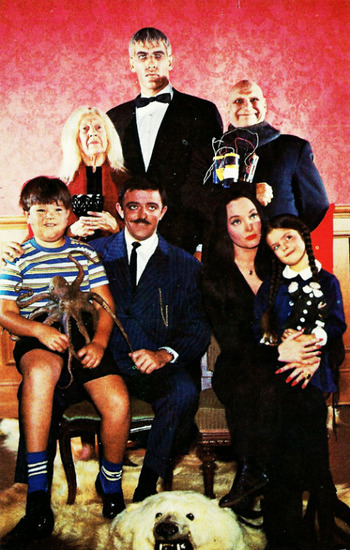 Television series based on the ghoulish cartoons published by Charles Addams in The New Yorker magazine starting in the 1930s, produced by Filmways and broadcast on ABC from 1964 to 1966. It was one of the last network series filmed entirely in black and white, which may have been a stylistic decision given the subject matter. While not very successful in the two years of its original run, it became a cult favorite once it entered syndication, and inspired spin-offs in many media.

A deliberate inversion of the ideal American Nuclear Family, the Addamses are an obscenely wealthy clan of borderline supernatural beings with a taste for the grotesque and macabre, possessing opinions and preferences that are mirror images or inversions of more conventional attitudes. Although very visibly different from virtually everyone they meet, they still perceive themselves as a "perfectly normal family"; in fact, they seem somewhat incapable of even noticing that their lifestyle varies widely from that of their neighbours.

They also invert various horror-movie tropes about evil families: despite their tastes and the apparent trappings of pain and horror amidst which they live, the Addamses are clearly NOT evil — they are compassionate and loving, friendly to all they meet, eager to help strangers in times of need, and tolerant to a fault. In fact, they are probably more so than most families! The end result is more delightfully eccentric and endearing than disturbing.

Together they live in a crumbling Second Empire-style home which looks much like a stereotypical "haunted house" and which seems at times to be animate and sentient, with a playful attitude toward most visitors. Inside is a museum — or a Ripley's Odditorium: strange and bizarre decorations and furnishings fill the house to the brim, and invariably shock first-time visitors.

And do they have visitors. The primary theme of The Addams Family was culture clash — that of post-war America against something profoundly and grotesquely other. All manner of ordinary folk encountered the Addamses — sometimes to their benefit, sometimes to their dismay — but never without challenging their notions of normality and reality.

A secondary theme was tolerance — as strange as they are, the Addamses are the heroes, and the viewer is encouraged to understand, empathize and identify with them regardless of their macabre ways. Once the Addamses are familiar, delight comes from anticipating the reaction of the next unsuspecting mundane to cross their path. The show was so exquisitely crafted that this appeal to tolerance was never blatant, save for one memorable episode where a Rebel Without a Cause-style biker crashes into the Addams home; he is so astounded by and grateful for their casual acceptance of his unconventional ways that he holds them up as an example of a true family to his rigid, unyielding father.

In short, a classic series, groundbreaking in many ways, that entertains and challenges the viewer. Among its many "firsts" was the relationship between Gomez and Morticia — one of the most singularly passionate marriages on television in that or any other era, it was perhaps the first time a married couple had been shown to be so fiercely and intensely in love with each other. In fact, it's been half-joked that the couple appear to be the only 1960s TV parents capable of having children. Interestingly, the Addamses are widely considered to be the most mentally healthy 60s Sitcom family out there, and with good reason.

A Reunion Show, Halloween With The New Addams Family, aired on CBS in October 1977 featuring most of the original cast.

Once the program's cult status was well-established, it became the subject of several revivals, remakes and Animated Adaptations, which are detailed on the franchise overview page.

A revival series, The New Addams Family, ran from 1998-1999 on Fox Family, and was preceded by a Direct-to-Video pilot movie, Addams Family Reunion (both were produced by Saban Entertainment).