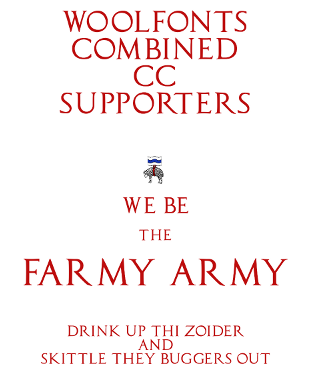 The Rector, the schoolmaster, the retired cricketer and his wife, the chef, and the ex-footballer … who don't quite realize they are among the Great and the Good of the District. Began as True Companions; have by now been through enough (even unto a Bar Brawl) to be a Band of Brothers (united in part in impatience with the Duke's forever quoting from Henry V).note The Duke being in many ways Fluellen, this is probably inevitable.

The Rev'd by the end of Evensong, Canon Noel John Paddick SSC, Rector:

A gentle man, but tough when he needs to be; widower of the late Pauline, ''née'' Stamford; nowadays celibate, he and Sher Mirza being to his surprise chastely in love and too conscientious to act on it; a sickly child turned handsome and athletic, and unashamed of his Black Country origins beneath the sharp brains and Oxford education.

The Duke: "Noel's perfectly capable of drowning himself tomorrow trying to save, not even a parishioner, but a parishioner's kitten; or [dying] from some contagion acquired in visiting the ill with no thought for himself."
Sher Ali Mirza CBE MA (Ebor) MMus (Leeds) ARCO Dip CHD, Deputy Headmaster

Sher Ali Mirza CBE, English and Music Master, and, by the end of Evensong, Deputy Headmaster, at the Beechbourne Free School:

Yorkshire-born. Looks like a male model. Highly cultivated but not in the least snobbish (his uncle would demur: his uncle the Nawab, mind you). Musicologist by preference, English Master by primary trade. Is the only practicing Muslim in the UK to be, academically, an expert on the music of the Church of England. Nephew, eventual heir, and distant cousin to HH the Nawab of Hubli, who married his father's sister. Utterly and chastely in love with the Rector. Generally beloved of all; not to be trifled with by those who aren't fans. (Including Edmond, when Edmond's activism outstrips his sense.) Recovering alcoholic; fiercely protective of his family and those he loves (and Dangerous When Roused).

"But what I want … what I want I can't have."
Brian Francis Michael Maguire CBE ("The Breener"), late England cricketer, now TMS summariser

Brian Francis Michael Maguire CBE: MCC Member; was born in Kilgarvan, County Kerry, to a farming family. … an assisted place at Downside. ...Leaving Downside, The Breener was snapped up as one of the first intake at the newly-established ECB National Academy (now the National Cricket Performance Centre at Loughborough University). He was thereafter signed for Derbyshire, until moving to Somerset CCC three years after. It was whilst he was at Somerset that he was first capped for England Lions, and, in short order thereafter, for the England Test side, making his first Test appearance in 2003, against Zimbabwe at Lord's. His international career (Test, T20I, and ODI) was shaping well when his old knee trouble, the relic of past scrums for the Downside XV, recurred. Plagued by injury, he was not able to reach quite the heights which were confidently predicted for him and clearly within his grasp, although he was twice Cricketer of the Year in his sadly abbreviated career. Upon his retirement, he became and has remained a popular lecturer and a beloved addition to TMS. He married the Hon. Gwen, née Evans, daughter of the racing life-peer The Baron Evans of Pont-y-clun and Aintree.... Teams: England; MCC; England Lions; Somerset; Derbyshire
– The Almanack

A laughing, boisterous broth of a boy from a farm family in Kilgarvan, Co. Kerry (to which they fled from Ulster in Cromwell's time); sent to Downside on a fully assisted place to be molded into a Test cricketer. Which he was, until old knee injuries put paid to that, at which point the Duke lured him to the Woolfonts to coach the all-conquering local XI. As of the end of Evensong, is married to the Hon. Gwen and father to twins. In retirement, a wildly popular lecturer and TMS fixture, playing the Stage Oirishman with glee. Surreptitiously intelligent and well-read. When he stops laughing and smiling … run.

The Hon. Gwen (Evans before marriage, Maguire since), owner of the Woolbury Stud:

Welsh and Anglo-Welsh bloodstock breeder, and daughter of a life peer given a life peerage for Services to the Turf (The Baron Evans of Pont-y-clun and Aintree). Deceptively mild and fluffy; is in fact a bloody cobra. Holds everyone who knows her in the palm of her dainty hand, and you'd best hope she doesn't have cause to clench that hand. Now married to The Breener, and recently the mother of twins, making, in all, three children for her to boss. Very candid friend to Lady Crispin; thick as thieves with, naturally, Lady Agatha. Everyone in the Woolfonts, without distinction of age, sex, marital status, or orientation, and including the Duke, is half in love with her … which she ruthlessly Uses For Good when necessary.

Charming, wild-maned, sexy chef. Civil partner of by The Day Thou Gavest, husband of, and planning to adopt sprogs with Edmond Huskisson. Born in rural Cheshire; won a BBC reality-show culinary seriesnote a pretty clear Expy of The Great British Bake Off and went off to France to train; by preference a pâtissier. As The Celebrated Hipsta Chef, a darling of press and broadcast. His first job back in England was at one of the Duke's clubs; later, the Duke brought him to the Woolfonts to resurrect the local gastropub and hotel. Spacey, sweet (outside the kitchen: in the kitchen ... he once made Gordon Ramsay cry, in fear, on live TV), eternally boyish, and of course a Lib Dem. Too naive for politics, really....

"Mango is an underrated fruit, yah?"

Edmond Austin Huskisson OBE JP was born in Illingworth.... Signed as a schoolboy to Halifax Town AFC, he was soon picked up by Leeds United for development.... 'Huzza' rapidly established himself as 'the thinking man's striker' … Hull FC, and then, on the cusp of certain stardom, to Manchester City. Man City, the first Premier League club to be designated 'gay-friendly' by Stonewall UK, soon found occasion to back its new addition, when Huzza was outed on the morning of the city derby. He was sent on in the second half. Sadly, in a scandal which had lasting consequences, 'the thinking man's striker' was carried off shortly thereafter, having been laid out by a blatant foul and, whilst down, showered not only with abuse but with objects from the Man Utd terraces … rendered legally blind in one eye … never again able to play football professionally. He moved to rural Wiltshire immediately thereafter, taking a small country house, 'Chalkhills', in the Woolfonts. After a period of internal struggle, during which he drank heavily, he turned his life around and in a new direction, with the help of AA, neighbours such as the Duke of Taunton, and the new interest in his life, the celebrity chef Teddy Gates, proprietor of the award-winning The Woolford House Hotel nearby. Huzza could no longer, perhaps, be 'the thinking man's striker', but he was now free to be a thinking man: he earnt his BA (Hons) through the Open University and threw himself into charitable and advocacy endeavours, which continue to this day with the assistance and support of Teddy Gates, now his civil partner. He now serves on numerous boards and committees dedicated to overcoming discrimination in sport; is a Governor of the Beechbourne Free School, at which he acts as a part-time adjunct games master; and is involved in numerous local charities and community projects, including as a Member of the Board of Governors, the Agincourt Housing Association Trust. He was created MBE for services to sport and the community, and raised OBE in the Birthday Honours of the year just past for further such services.
– Hall of Fame entry

The other refugee from Yorkshire. Former Premier League striker (Man City) fouled in the city derby and half-blinded on the pitch by things thrown from the terraces, having been outed by the tabloids that morning. Has become, not surprisingly, a somewhat fanatical activist in his retirement. Civil partner and, by The Day Thou Gavest, husband, and planning to adopt with, of Teddy Gates. Thinks "tact" is the past tense of "tack." Has a stack of chips on both shoulders, including class, sexuality, and Yorkshire chauvinism. Was best friends with Sher until Noel arrived; his nose is still out of joint over that. Tries very hard to be Straight Gay and Yorkshire-tough; tends to become waspish and bitchy instead. Everyone loves him anyway, even when they want to strangle him.

"Have you quite finished?"