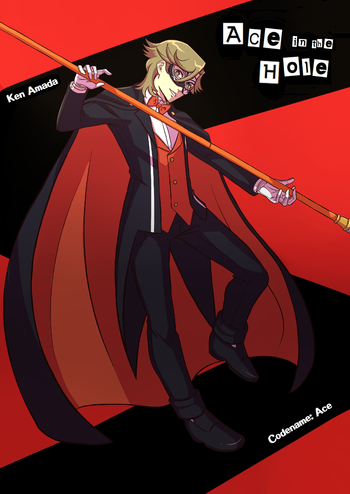 A hidden advantage or resource kept in reserve until needed.note Art by Pinigo
Ace In The Hole

is a Persona 5 fanfiction by eiranerys

. It focuses on a What If? scenario on Ken Amada being sent by the Shadow Operatives to Tokyo to investigate the Phantom Thieves. This will eventually lead Ken to join the Phantom Thieves, under the codename "Ace". Here is the link to the AO3 version

There is also a spin-off fanfiction called Persona Q2: The Ace Edition

, which is the Persona Q2 spin-off version of Ace In The Hole. You can find the the AO3 version here

Additionally, as a part of "ShuAnn Week 2019," eiranerys created a one-shot set in the same universe that centered around the wedding of Ren Amamiya and Ann Takamaki entitled A Future In Her Eyes.

The link to the AO3 version can be found here.

The author also wrote another oneshot in this universe about the 20th anniversary of Ken's mother's death, fittingly titled Twenty Years Later.

You can also read it on AO3.

You can also find all canonical parts of the series under its Archive of Our Own Designation: PT!Ken AU.

Fan art and additional info can be found on Tumblr here

Expect unmarked spoilers for Persona 5, as well as other installments like Persona 3 and Persona 4.