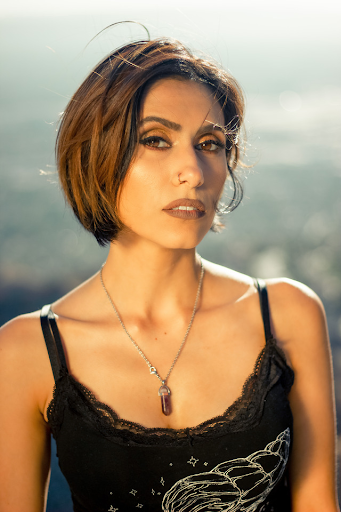 She caught the attention of dubbing studio Bang Zoom! Entertainment from a voice acting panel at Anime Expo 2004, an anime convention in Southern California. Since then, Bang Zoom! has continually invited Vee to do voice work in anime, foreign films, and commercials. She has appeared at conventions throughout the United States where she sometimes sings live concerts (this apparently landed her the live action role as ASOS Brigade leader

in Haruhi Suzumiya season 2). Vee's also one of the co-hosts of Anime Olympics

and season 2 of Anime TV

. At one point (the video has since been made private), she dubbed a BlazBlue webcomic, voicing... who else? Noel. As you can guess, she's One of Us, and that's not even mentioning that she wants a shot at voicing

Sally Acorn. She has been working as the voice director of Skullgirls.

Despite her new start, she quickly racked up popularity amongst the new age of voice actors, making her a fan favorite and most of her appearances in many projects will be met with much rejoicing. Yes, that's right, in a quick moment, she is starting to rival the popularities of accomplished ones, the likes of Johnny Yong Bosch, Michelle Ruff, Stephanie Sheh, Yuri Lowenthal, etc... (although still a long way to go until she reaches the memetic status of Crispin Freeman or Steve Blum). Since then she has been constantly improving her image professionally and shows no signs of slowing down her career. She was engaged to musician/voice actor Nathan Sharp of NateWantsToBattle, but they broke up months later.

Not to be confused with Christine V (though if FSS ever gets another animated production, the casting choice for her in the English version is fairly obvious...).

, she has a Formspring

account. Mind you that since she's really busy on her voice acting work, she may not have time to reply to any submitted questions at her Formspring account. But she does reply to them, eventually. She also has a Twitter account

Now has her own 'Vocaloid', in Veecaloid Pop

Cristina knows about this trope page. And she does give her approval.

Cristina Valenzuela and her works provide examples of:

"In the name of Mars, I will chastise you!"
Feedback