Members of Kaiba Corporation or participants of Death-T from the manga and anime series Yu-Gi-Oh.

ALL spoilers will be unmarked ahead. Beware of major spoilers.

See his own page here 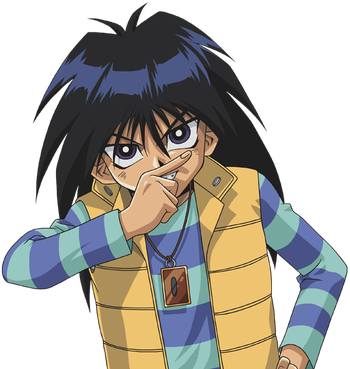 Seto Kaiba's little brother and biggest fan. In contrast to his brother's obsession with Duel Monsters, Mokuba has an obsession for Capsule Monster Chess. He is initially portrayed as a spoiled brat, with vindictive and malevolent behavior. He was named champion at Capsule Monster Chess, but cheated in many of the games he played. His negative traits are partly credit to the neglect he gets from his older brother, whom he desired to prove his worth to. Though still somewhat of a "brat", his behavior improved as he befriended Yugi Mutou and his companions and as Seto grew to love and appreciate him. In the anime, he is made to be much friendlier right off the bat.

Aside from his brief unfinished stint playing Duel Monsters against Yugi in Duel Kingdom, the only games he ever played on-panel were Capsule Monster Chess and Russian Roulette Dinner. Can usually be seen either carrying his brother's briefcase or monitoring his brother's tournaments. While Kaiba is openly disdainful of Yugi and his friends, Mokuba gets along with them just fine, though he's still mostly on his brother's side when it comes to the rivalry he has with Yugi. 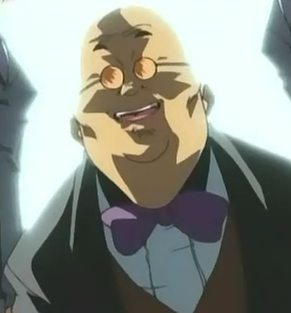 Seto Kaiba's faithful butler, rarely leaving his side. He once worked as a torturer and learned to resist torture himself, before being employed by the Kaiba family. Using his skills of torture, he designed the Electric Chair Ride game of Kaiba's Death-T theme park. The ride was designed to make the participants scream, which they must resist doing to avoid being electrocuted with ten million volts.

In the Toei anime he was given the name Daimon, and was a more heroic character than in the manga. The Duel Monsters anime also named him Daimon, and the English dub named him Hobson. 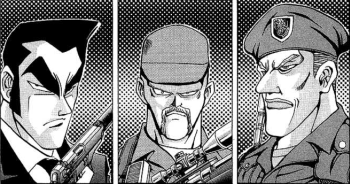 The Laser Tag Assassins were three professional mercenaries hired by Kaiba. After being offered ¥10,000 each for killing Yugi and his friends in the Shooting Stardust game of Kaiba's Death-T amusement park, they were determined to get their job done and were equipped with guns that fired real lasers that can cause fatal electric shocks, whereas Yugi and his friends were given toy guns.

In the original manga, the team composed of Johnny Gale, a former Green Beret commander, Bob Mcguire, a former SWAT team leader and sniper, and Name unknown, a hitman who succeeded in killing all of his opponents until he was hired by Kaiba Corp. 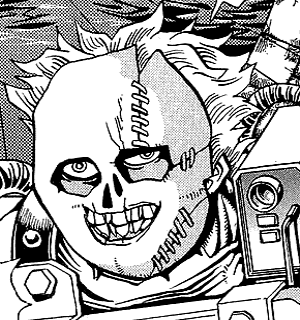 One summer during a camp near Domino Lake, Chopman murdered ten boy scouts who had been staying there in a single night. He chopped their bodies into unrecognizable pieces and the news of the murders had all of Domino City in fear. The suspect came to be known as "The Chopman", but was not captured and remained at large. Seto Kaiba later hired him for the Horror Stage of his Death-T theme park.

After a horrifying struggle, Jonouchi manages to kill the Chopman by burning him alive. 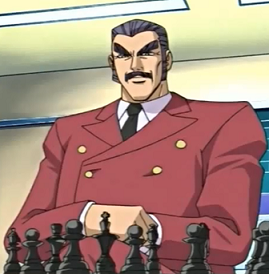 The former head of Kaiba Corporation and Seto Kaiba's adopted father. When Kaiba took over the company, Gozaburo either fled in shame, committed suicide or experienced a heart attack, depending on the adaptation. In the anime, he is the mastermind of the Virtual World arc and Noah's father.

He uses an Exodia deck, focusing on Exodia Necross. 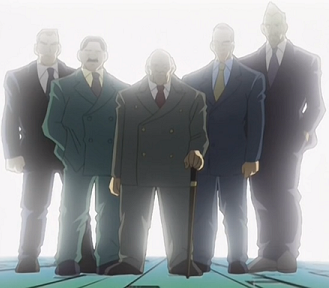 The Kaiba Corp board of directors, consisting of Oshita (Gansley), Otaki (Crump), Ooka (Johnson), Ota (Nezbitt) and Daimon (Lector). Played a part in Seto Kaiba's takeover of the company when Gozaburo ran things, but once Seto Kaiba took over he stripped them of their power and left them as figureheads. They've since tried various schemes to take the company for themselves, such as when Yugi Mutou beat Kaiba in his Death-T final game, which left him in a coma and without his title of best gamer. Thus, they attempted to work with Pegasus to take control of the company.

In the anime, the Big Five are promoted to significant filler villains. Their betrayal is what ultimately result in them being locked in a virtual world; they must each defeat a member of the main cast in a duel in order to escape. They fail, and are either trapped in cyberspace forever or deleted from existence depending on the version.

The former vice president of business strategy at KaibaCorp.

A former KaibaCorp accountant (human resources in the original).

An engineer and former chief technical officer of KaibaCorp.

A rule-posturing KaibaCorp employee who refereed the final duels during Battle City, Isono is also Seto Kaiba's personal bodyguard. He continued to work for KaibaCorp after the tournament, though in Yu-Gi-Oh! The Falsebound Kingdom he quit and found new work at SIC.
Scott Irvine

A KaibaCorp technician who supervised the creation of the Duel Disk, Scott Irvine bore witness to Kaiba defeating his Blue-Eyes Ultimate Dragon with Obelisk the Tormentor. His story ends there in the manga and anime.

In the Yu-Gi-Oh! The Falsebound Kingdom video game, Scott is the main villain of the game, trapping the characters in a virtual game world in a bid to summon DarkNite. He also cameos in Yu-Gi-Oh! The Movie: Pyramid of Light and Yu Gi Oh The Darkside Of Dimensions.