Wrestling / Dwayne Johnson
aka: The Rock 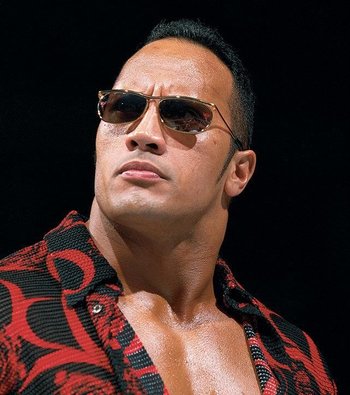 The Great One.
The Brahma Bull.
The People's Champion.
"Finally... The Rock HAS COME BACK!... To TV Tropes!!!"
Advertisement:

Dwayne Douglas Johnson (born May 2, 1972) is a former football player turned professional wrestler turned actor, also known as "The Rock". He was born into the Maivia Wrestling Family on his mother's side, which has close ties to the Anoaʻi family (its members known for playing up the Wild Samoan stereotype). Before going into professional wrestling, Johnson previously played collegiate football for the University of Miami as a defensive lineman and briefly played professionally for the Calgary Stampeders in the CFL before going into professional wrestling. His father, also a pro wrestler, was Black Nova Scotian and former WWF Tag Team Champion Rocky Johnson.

Within just a few years using his incredible charisma and skills on the mic, The Rock quickly ascended the ranks of the WWF and soon was competing with Austin for the top spot in the company, becoming his Arch-Enemy and rival. He would also feud with Attitude Era's The Dragon Triple H, and the three way feuds with Austin and Triple H would be a common running theme.

When his contract with WWE ended in 2004, he started a full-time acting career. He also is the current owner of the 2020 iteration of the XFL, looking to try and make sure that professional football league is also Rescued from the Scrappy Heap going into 2023 and beyond that after it was one of the first victims of the COVID-19 Pandemic through unfortunate timing.

For more about his acting career, see his creator page. Were you looking for the movie directed by Michael Bay? IT DOESN'T MATTER WHAT YOU WERE LOOKING FOR!!!