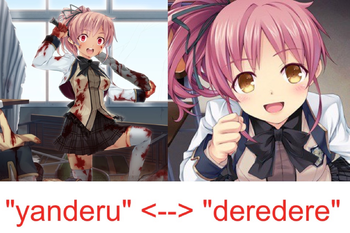 She loves you, and she'll do anything to have you. ANYTHING.
"You'd actually be attractive if you didn't have crazy eyes."
— Dilbert, Dilbert
Advertisement:

"Yandere" is derived from the Japanese words yanderu, meaning insane or sick, and deredere, meaning affectionate or loving. Simply put, a yandere is someone who is lovesick, someone who has been driven to insanity by extreme obsession or love, thus resulting in abnormal behavior if not violence. Take the Tropes Love Makes You Crazy, Love Makes You Evil, Love Hungry, and Stalker with a Crush, and condense everything into a singular personified character archetype.

The word "yandere", a term that blossomed in moe fandom, refers to a character who is crazy about someone else... often literally and violently. Yanderes are usually identifiable by their blank eyes when they go crazy, blood being soaked on them for the majority of their screentime, carrying at least one signature weapon that they use to kill and/or attack others for the majority of their screentime, a mostly Moe appearance or at least an appearance that will deceive others, psychotic behavior, and a tendency to attack and/or kill people who would get in the way of their love. Many of them are Ax-Crazy. "Benign" cases don't even need to bring weapons or violence into the mix: just a well-established aura of menace and the feeling of dread if you step out of line is enough. When on the Good Guys' team, they are often the Token Evil Teammate (or at least the fourth type of the Anti-Hero).

The character almost always appears perfectly cute and harmless on the surface... but underneath they may be obsessive, controlling, and sometimes just plain insane. This is bad news for anyone unfortunate enough to be the object of a Yandere's obsession, as nothing will dissuade the Yandere from the notion that they are theirs and theirs alone. But even more pity should be saved for anyone who gets in the way, as this psycho-obsessive is amazingly unwilling to put up with any rivals to their often genuine affection. Most Yanderes have a history of mental instability, but some have always been just a little bit "off", perhaps the product of a Dark and Troubled Past and a good round or more of Break the Cutie. If a Yandere ever goes off the deep end, they are likely to go Ax-Crazy, taking up the psycho weapon of their choice and doing things to people straight out of a horror movie. Sometimes, they're also going to be revealed as a Psychopathic Manchild (or womanchild if the Yandere is female). Usually their target is whoever they perceive to be in the way, but if the person they love rejects them or leaves them, they may well decide that they would rather see the person dead than with another or themself because they're nothing without them, which may well lead to tragedy.

Part of the dere family along with Tsundere (cranky outside, sweet inside), or sub-groups; Kuudere (cold outside, sweet inside), and Dandere (asocial outside, sweet inside). However, those are all sweet inside, while the Yandere is sweet outside, crazy inside. While a Sweet Tsundere may have some similarities with a Yandere (especially if jealousy is one of their vices), the Yandere will often patiently endure things that will send any Tsundere utterly bonkers, but the Yandere's jealous, possessive and obsessive nature won't let them accept the possibility that the person they love can be happy without them. Unlike most Tsunderes, including sweet Tsunderes, a Yandere is usually a Girly Girl with a Tomboy Streak, or even a Girly Bruiser, since she is girly and lovey dovey outside, but violent inside.

Such characters are mostly female, but male examples exist. Compare with the Violently Protective Girlfriend, who can become Ax-Crazy when the love interest is in danger, but is otherwise much more stable mentally. At the very least she's more likely to keep her uses of force proportionate to the situation: someone flirting with you will be more likely to cause her to react with a Death Glare instead of a chainsaw. If the admirer is crazy, but tends to be the one who gets violently abused by their affection, then this is Mad Love.

When two Yanderes form a relationship, they are a Yandere Couple.

See also Clingy Jealous Girl, her Spear Counterpart Crazy Jealous Guy, Love Makes You Evil, Love Makes You Crazy, Stalker with a Crush, Stalker Shrine, Domestic Abuse, Violently Protective Girlfriend, Villainous Crush, Always Save the Girl, and If I Can't Have You…. Compare Stepford Smiler, Psycho Supporter, and I Have You Now, My Pretty. May God have mercy on you if you are caught in a Psychotic Love Triangle (a love triangle with two members being Yanderes). Contrast with Bitch in Sheep's Clothing, in which a character is consciously using the illusion of purity and niceness to cover up a sadistic true nature (though a BISC can become a Yandere if we add obsession and mental instability to the mix). At the extreme, A Love to Dismember can occur. Due to their often violent nature, they are likely to be The Unfettered. The more savage examples are also very likely to be Faux Affably Evil. Don't confuse with Yandere Kanojo, a manga which surprisingly doesn't involve actual yandere (except for one case, in which the victim had it coming. It ends well, though). Also contrast Cute and Psycho a.k.a. Yangire, who is also sweet and crazy, but whose craziness isn't tied to love.

If you still don't get it… well, why don't we have a self-demonstrating version for you to understand better, dear? Tee-hee!