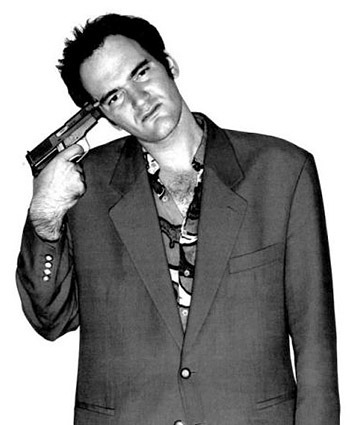 Don't worry, he's not going to shoot himself. He just saw it in a couple movies.
"When people ask me if I went to film school, I tell them, 'No, I went to films.'"
Advertisement:

According to legend, he learned everything he knows about filmmaking from watching old and obscure movies with his stepfather and working at a video rental store in Manhattan Beach. Roger Ebert once quipped that the store owner should get a finder's fee based on QT's subsequent career.

Tarantino's films have earned him Academy, Golden Globe, BAFTA and Palme d'Or Awards, and he has been nominated for Emmy and Grammy Awards. In 2007, Total Film named him the 12th greatest director of all-time. He is known for being very excited about his movies in interviews.

In 2014, he announced that he planned to retire from films after making his tenth, having reportedly learned from the trajectories of other directors that it's best for him to quit while he's ahead. He has currently made nine films as of this writing (counting both parts of Kill Bill as one film, as he intended) and hasn't backed down from the plan in interviews since.

. Suits well for the trope page.

The list of actors appearing in his films can be found here.

Works that he has been involved in:

Wrote but did not direct:

His film and TV roles include:

Each of his films is packed chock-full of references to other films: here is a far from complete list.

Quentin Tarantino and his works provide examples of: