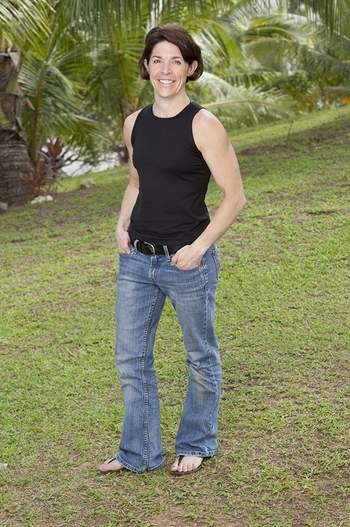 Allegiance: Matsing, Kalabaw, Dangrayne
Born: 1971 (age 41)
From: Cedar Rapids, Iowa
Sex therapist and one of the two remaining members of Matsing after losing four straight immunity challenges. Absorbed to Kalabaw in Episode 5, then manages to become the Sixth Ranger to Kalabaw, somehow makes her way to the Final Three and win. Quite a good feat for one her age combined with being perhaps one of the unluckiest contestants to play the game. 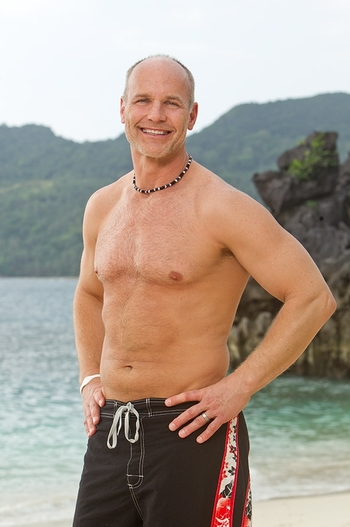 Allegiance: Tandang, Dangrayne
Born: January 29, 1962 (age 50)
From: Farmington Hills, Michigan
Software publisher and alumnus of Australian Outback, and the series' first forced evacuee, after passing out from inhaling smoke from a bonfire and burning his hands. On his first outing in 11 years, he still proves to be a capable player at age 50 - but we can kind of see how he had such an accident his first time around. While he made it to the Final Tribal Council, he and Lisa were ravaged by the jury for the moves they made and their supposed "Holier Than Thou" attitudes, and lost in the jury vote to Denise, 6-1-1.
Lisa Whelchel 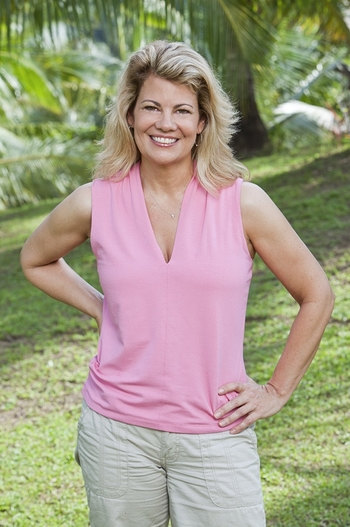 Allegiance: Tandang, Dangrayne
Born: May 28, 1963 (age 49)
From: Dallas, Texas
Former teen star famous for playing rebellious rich kid Blair Warner in the 1979-1988 sitcom The Facts of Life and another player for Tandang. In contrast to her colorful personality onscreen, she admits to being a quite introverted woman behind the camera, as well as a huge Survivor fan. One of the recurring themes of the season was Lisa trying to find it in herself to play deceptively, despite being as far away from a deceptive person as one could get. She ended up in a tight alliance with Michael, which made it all the way to the Final Tribal Council. Unfortunately, the two of them were ravaged by the jury for their supposed "Holier Than Thou" attitudes, and Lisa came a tied second with Michael, having been beaten by Denise in the jury vote 6-1-1. 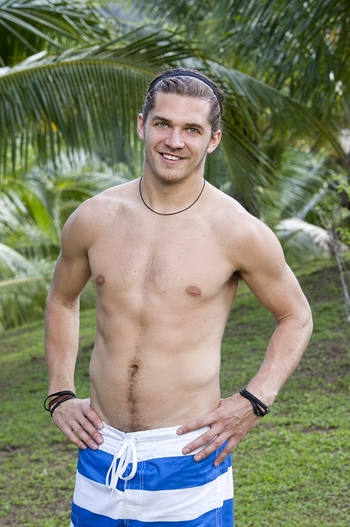 Allegiance: Matsing, Tandang, Dangrayne
Born: May 7, 1986 (age 26)
From: Hermosa Springs, California
A bartender and the physical powerhouse of Matsing, and one of its two last remaining members follow four straight immunity losses. Once it was just him and Denise left, they were absorbed into apposing tribes, where Malcolm finally found new life in the game due to being immediately accepted by his tribemates. His wit and physical prowess also became some of his defining features, and he used those skills to bring himself to the Final Four, where he ended up choking on an immunity challenge when he needed it most, and was sent home in 4th place when the other three feared him beating them in a jury vote.

Being one of the fan favorites of the season, he was soon invited back to play in Survivor: Caramoan. 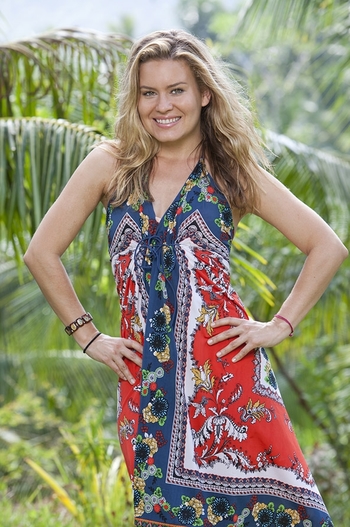 Allegiance: Tandang, Dangrayne
Born: October 21, 1979 (age 32)
From: Los Angeles, California
A Brazilian-born business major student and member of Tandang. She began the game allying with RC, but paranoia quickly got the better of her and she lashed out against perceived "betrayal". After being manipulated by Pete, she was turned on RC and started to inadvertently alienate herself from her tribemates, and quickly became the villain of the season, with most of the post-merge being spent trying to get her eliminated. Eventually, her former tribemates turned on her and ousted both Artis and Pete, after which she lost all the power she had. After making it to the Final 5, she tried to get everyone to take her to the end because there was little chance of her winning a jury vote, but the threat of Malcolm winning his way into the end was too much on everyone else's minds, so she was booted over Denise at 5th place.

Being one the more notable people from her season, Abi was on the ballot to return for an Second Chance season and was chosen by public vote to return for Survivor: Cambodia. 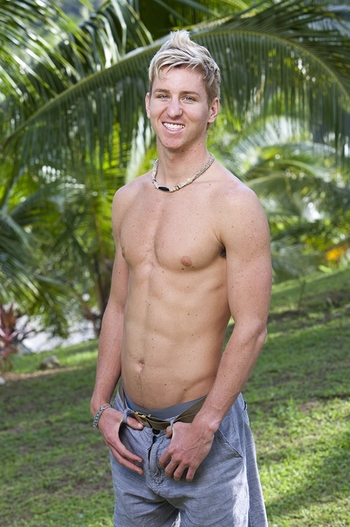 Allegiance: Kalabaw, Dangrayne
Born: 1988 (age 24)
From: Shawnee, Kansas
Track-and-field coach and a player for Kalabaw. Despite receiving the least amount of screentime of anyone who made the merge, the one thing every one of his tribemates could agree on when talking about Carter was that he was a great kid who nobody could say a bad thing about. He initially played second-fiddle to Jeff Kent before the merge, and after Jeff was eliminated he found himself working with Jonathan Penner. However, once Jonathan was eliminated he was left on his own, and after he lost immunity at the Final 6 he was put on the chopping block against Abi-Maria, and the desire to use Abi as a finals goat sent Carter home in 6th place.
Jonathan Penner - Cook Islands 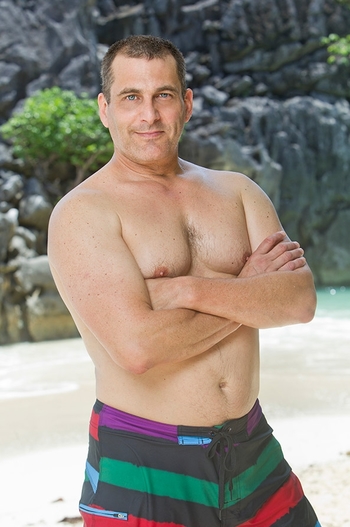 Allegiance: Kalabaw, Dangrayne
Born: March 5, 1962 (age 50)
From: Los Angeles, California
Film/TV writer and alumnus from Cook Islands and Micronesia, now playing for Kalabaw in what he considers his third chance to win, after his first outing ended with eviction, and the second saw him forcibly evacuated due to a knee infection (the latter which served as his reason to enter this season). After initially having it good for the first half of the game, his rejection of a pact with Lisa and Michael, compounded with Abi-Maria winning immunity, meant that Jonathan was the only ideal target, and he was voted out once again in 7th place.
Pete Yurkowski 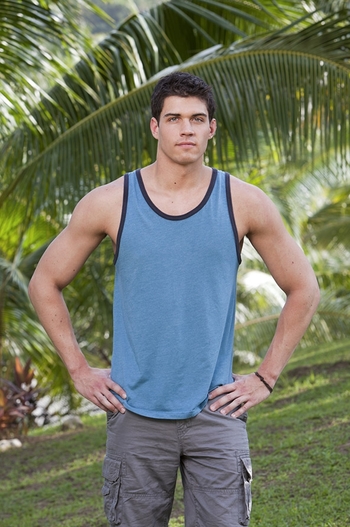 Allegiance: Tandang, Dangrayne
Born: March 3, 1988 (age 24)
From: Holmdel, New Jersey
Ukrainian-blooded engineering graduate, fashion model and another power player for Tandang - or so he was initially billed. As time passed, his manipulative ways - not the least of which is pitting RC and Abi against each other - started to wane once he tried to bring Malcolm to his side, unaware that he's a lot smarter than he looked. He eventually gets booted out after Abi plays her hidden immunity idol, only to negate their 3-vote tie, putting him out of the game in 8th place.
Artis Silvester 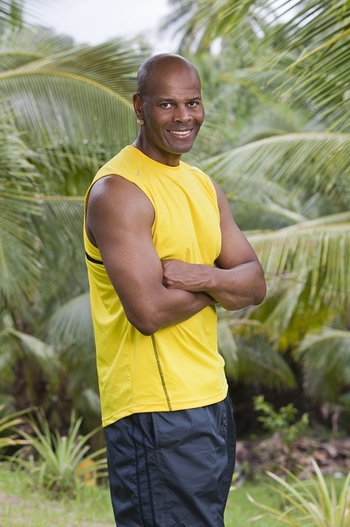 Allegiance: Tandang, Dangrayne
Born: April 1, 1959 (age 53)
From: Terry Town, Louisiana
Computer engineer, cancer survivor and player for Tandang. Aligned with "villains" Pete and Abi after RC was pushed out of the group. Was targeted at the Final 9 because he was the least likely of the three to have Tandang's idol, and was ultimately voted out in 9th place.
Jeff Kent 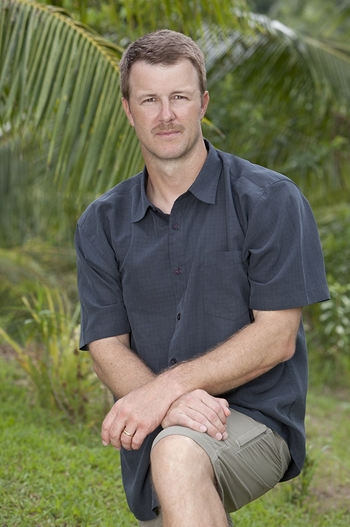 Allegiance: Kalabaw, Dangrayne
Born: March 7, 1968 (age 44)
From: Austin, Texas
Former Major League Baseball player, five-time All Star, 2000 National League MVP and a player for Kalabaw. Desired to get rid of Penner since the beginning, and tried voting him out the first chance he got. This ended up backfiring on at the next Tribal Council: Penner ended up winning immunity, and in the resulting scramble, the very people he schemed with to vote Penner out end up voting him out instead in 10th place.
Roberta Christine "R.C." Saint-Amour 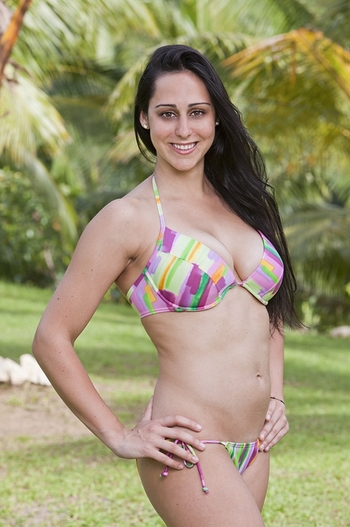 Allegiance: Tandang, Dangrayne
Born: 1985 (age 27)
From: New York City, New York
Investment banker and a major player for Tandang. While she was initially in a position of power, with a solid alliance with Abi-Maria, Pete and Michael, Abi-Maria and Pete pulled a coup once Malcolm arrived, sending her original game crumbling to the ground. At her first Tribal Council, in the merged tribe, Jonathan played his hidden idol, blocking the five votes that would have eliminated him, and caused her to fall through the trapdoor on four, eliminating her at 11th place. 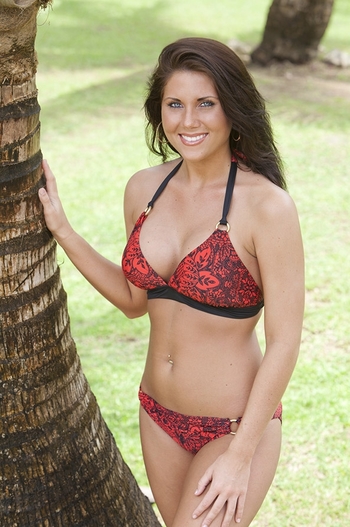 Allegiance: Kalabaw
Born: 1990 (age 22)
From: Newark, Delaware
2011 Miss Delaware and a player for Kalabaw. After being forced to align with Dana and Dawson thanks to Penner pulling in Carter and Jeff, Dana's sudden sickness and her unwillingness to cause a tie to save Dawson end up leaving her to the odd woman out. Despite Carter and Jeff debating the possibility of voting Jonathan out before the merge, they end up voting out Katie instead in 12th place.
Sarah Naomi Dawson 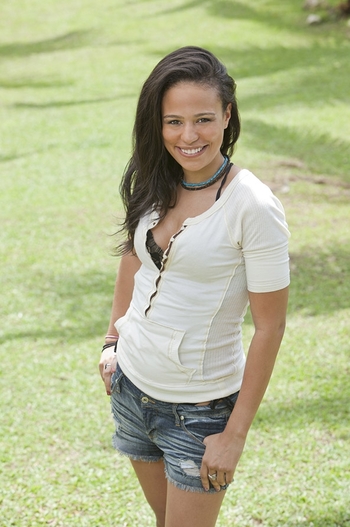 Allegiance: Kalabaw
Born: November 15, 1983 (age 28)
From: Silver Spring, Maryland
An insurance saleswoman and member of Kalabaw. The only person on Kalabaw to recognize Jeff Kent, she was forced to align with the other females once Jeff and Carter aligned with Penner, but her game came crashing to the ground after Dana was evacuated, and once Jeff realized she knew who he was, she was the first target, and the first person voted out of Kalabaw in 13th place.
Dana Lambert note (Medically evacuated) 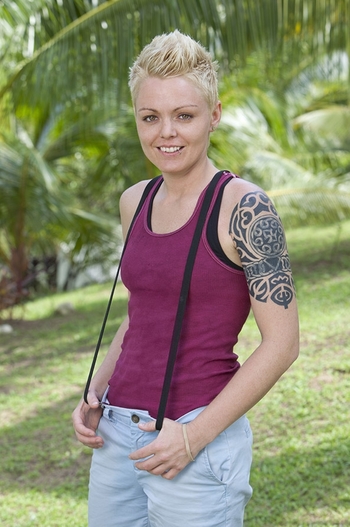 Allegiance: Kalabaw
Born: December 13, 1979 (age 32)
From: Winston-Salem, North Carolina
Cosmetologist and a power player for Kalabaw. While she was initially a well-liked, well-respected member of her tribe, she was stricken with illness shortly after the tribe dissolution, and the medical team was called in to check on her. While they told her she could stay in another 12 hours before checking up on her condition again, the pain was too much for her and she agreed to pull herself out of the game for her personal health, finishing up in 14th place.
Russell Swan - Samoa 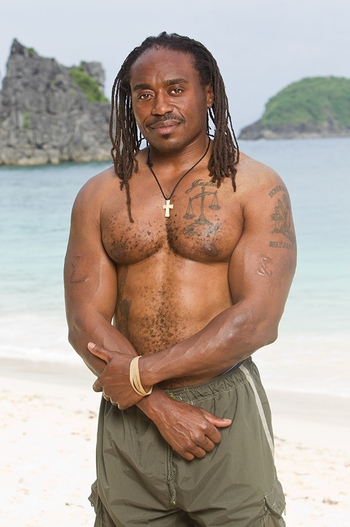 Allegiance: Matsing
Born: February 17, 1967 (age 45)
From: Glenside, Pennsylvania
Blacking out twice from dehydration during his outing in Samoa and being forcibly evacuated, Philadelphia attorney Russell comes back with a mission to win the second time around. Unfortunately, his pushy, loud-mouthed attitude didn't win him many friends in the tribe, who only kept him around for 10 days because they needed his experience. Their loss in four straight challenges also didn't help his temper and sanity. Come the fourth tribal council, Russell was shocked when Malcolm and Denise, whom he thought were now gunning for each other (and believing himself a swing vote), instead joined forces (which was their plan all along) to boot him out of the game in 15th place.
Angie Layton 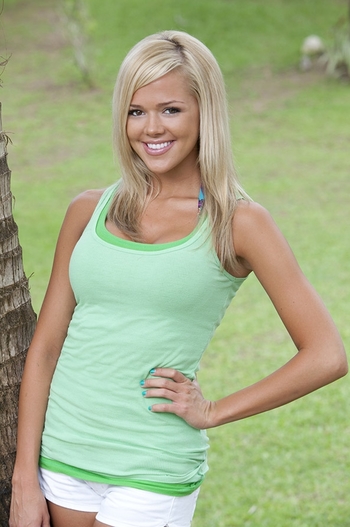 Allegiance: Matsing
Born: October 8, 1992 (age 20)
From: Provo, Utah
The youngest of the 18 castaways, Angie, a college student, model and beauty queen. She comes across as nothing but a flirt to Matsing's resident hot guy Malcolm, and nigh-useless when she tried to contribute to her tribe. Despite doing everything she could to prove her more worthy of staying than Russell, she was voted out in 16th place.
Roxanne Morris 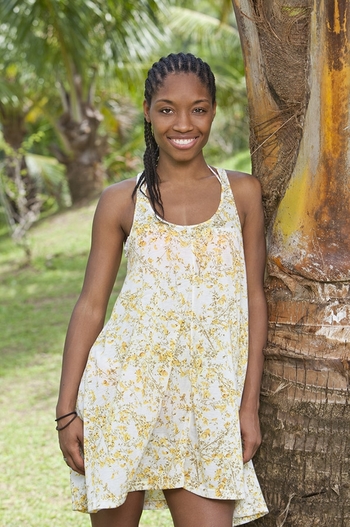 Allegiance: Matsing
Born: 1984 (age 28)
From: Brooklyn, New York
Seminary student and an outspoken member of Matsing, being the first to suspect something going on between Malcolm and Angie. That, however, came back to bite her when they targeted her for elimination, and she was voted out in 17th place.
Zane Knight 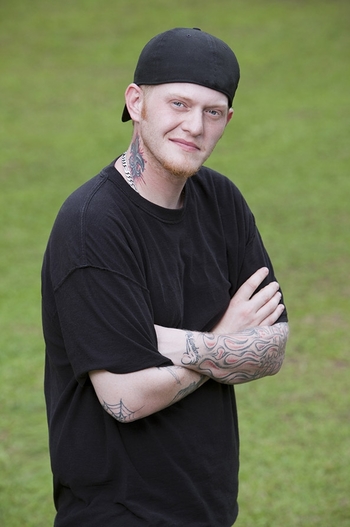 Allegiance: Matsing
Born: February 20, 1984 (age 28)
From: Danville, Virginia
Tire repair boy and the first person voted out of the season. During the first tribal council, Zane made a gamble to volunteer for eviction by taking the blame for their loss in the first immunity challenge (after running short of breath, which he attributes to withdrawal symptoms from smoking) just to see who would want him around. And it worked too well: the entire tribe, then rearing to boot Russell out, instead voted him off in 18th place.