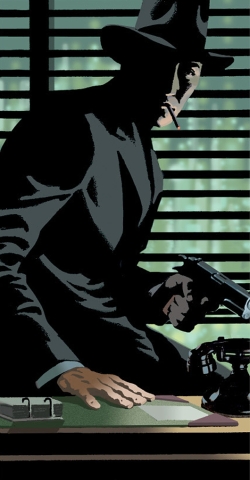 Will the real Sam Spade please stand up?
"Down these mean streets a man must go who is not himself mean, who is neither tarnished nor afraid. The detective must be a complete man and a common man and yet an unusual man. He must be, to use a rather weathered phrase, a man of honor. He talks as the man of his age talks, that is, with rude wit, a lively sense of the grotesque, a disgust for sham, and a contempt for pettiness."
— "The Simple Art of Murder,"

A professional detective not directly affiliated with a police department in any official sense (although many will have contacts in the department, and it's not uncommon for them to have previously worked in law-enforcement, as many of the skill sets overlap), a Private Detective takes on cases that private citizens bring to them - however, whilst they aren't supposed to investigate crimes (which are official matters for the police, who often look dimly upon private detectives sticking their noses in - both in fiction and in real life), they usually find themselves knee-deep in murders, robberies and kidnappings by the end of the story. They may be doing this because the Police Are Useless and/or unconcerned about solving the case, meaning our detective is the only person who is actually willing or capable of solving it. However, this is often justified (especially in classical Film Noir) by the detective starting off with a seemingly simple case, such as finding out if a woman's husband is committing adultery or investigating the disappearance of a man who vanished twelve years ago in order to resolve a debt he had with a wealthy businessman, only for things to spiral out of control to the point that the only way for the detective to get out is to solve the case.

Although it's more common for a Private Detective these days to be treated as just one step away from the Amateur Sleuth (or often, particularly if seen from the point of view of the police, as rather sleazy bottom-feeders usually involved in some kind of criminal activity and frequently ex-cops kicked off the force for some kind of corruption), the classic Archetype of the Private Detective - and the one that has generally stuck in the mind of people when they think of the profession - is either the Great Detective or the Hardboiled Detective. In Real Life, the Private Detective is often viewed as a Punch-Clock Villain for his or her use of Sinister Surveillance. The fact that they are officially licensed to go on a Stalking Mission to track whoever they are hired to investigate (often for non-criminal activity like adultery) puts them firmly in the camp of Sociopathic Hero, or a Psycho for Hire with no respect for other individuals' privacy, depending on who you ask.

In Real Life, some private investigators may also function as a Bounty Hunter, as the two professions are incredibly similar (although a Bounty Hunter will usually confront the individual he or she is tracking directly - a Private Investigator typically will not if he or she can help it). Private investigators are more likely to get hired for skip traces (tracking down bail jumpers, people evading service, people hiding from warrants, and similar parties so that the police and courts can do their thing), and that part of the job is typically nowhere near as exciting and involves lots of social media hunts and public record searches. The rest of their jobs are usually insurance investigations (usually for worker's comp cases, plus the occasional personal injury case when fraud or misrepresentation is suspected), as well as the occasional divorce case (typically investigating suspected parental unfitness, adultery, or concealment of assets), or (for investigators who specialize in it) bankruptcy proceedings or due diligence for investors seeking risky investments. Like with skip traces, a lot of these typically involve social media and public records searches, and active tailing or in-person surveillance only occurs when necessary (someone is suspected of fabricating or exaggerating a work-related injury, someone in a divorce is suspected to have a new significant other that they haven't disclosed, a bankruptcy petitioner is suspected of concealing or surreptitiously selling off assets, etc.)

While the comparison with the Amateur Sleuth is common, in many ways the stories work the opposite ways. The Amateur Sleuth, such as Miss Marple, tend to cozy locked room mysteries, where everything starts complicated and uncertain, but slowly works its way down as a logic puzzle, with a tidy solution where the killer is unmasked. The Private Investigator tends to start simple, but as the investigation will unravel an ever more complicated plot, and the ending is rarely tidy. Minor Crime Reveals Major Plot is a common thread. The killer may be unmasked, but larger problems tend to stay unsolved. The Hardboiled Detective is this guy made even tougher.

Vampire Detective Series often feature one as a protagonist, though of the immortal variant; while the Occult Detective uses magic.