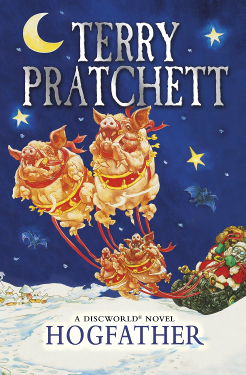 It's the most wonderful time of the year, Hogswatchnight, when the Hogfather himself dons his red suit and climbs in his sleigh pulled by—of course—four hogs, to shower gifts across Discworld. But when the fat man goes missing, someone has to sit in. It's up to Death to take up the reins—otherwise the sun won't shine tomorrow... or ever again.
Advertisement:

The 20th Discworld novel and the 4th in the Death theme, now becoming more like the Death-Susan theme.

Susan, Death's granddaughter, is trying to distance herself from her supernatural side by being normal (which is abnormal for the Discworld) and taking the position of governess in the Gaiter household, where she tries to instill some rationality into her young charges. Meanwhile, the Auditors' latest plan is to hire the Assassins' Guild to kill the Hogfather, the Discworld's Santa Claus analog. The task is given to Mr. Teatime, a creative but overly zealous young assassin, who has already hypothesized how to kill many anthropomorphic personifications in his spare time.

With the Hogfather out of the way, there seem to be a whole lot more minor gods and goddesses around than there used to be - and perhaps the disappearance of a tooth fairy might shed some light on the whole ordeal?

Preceded by Feet of Clay, followed by Jingo. Preceded in the Death series by Soul Music. Sort-of followed by Thief of Time, where Death and Susan do everything relevant that isn't done by Lu Tze or Lobsang. It was also the first book to be adapted by Sky One for a live action TV movie in 2006, starring David Jason as Albert and Michelle Dockery as Susan.

Now there remains one final question. Have you been naughty... or nice? Ho... Ho... Ho!