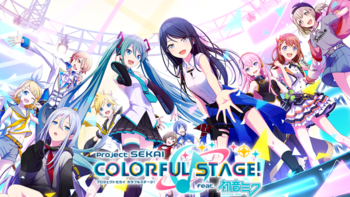 Project SEKAI: COLORFUL STAGE! feat. Hatsune Miku is a Free-to-Play Rhythm Game game released on September 30th, 2020 for mobile devices, with a demo version released from September 4th through the 11th. The game is published by SEGA and developed by Colorful Palette, a subsidiary of Craft Egg. Project SEKAI is an entry in the larger SEGA feat. HATSUNE MIKU Project that the Hatsune Miku: Project DIVA series is also a part of, and as such shares a few elements with its companion series. The game also doubles as a Tech Demo Game for Crypton Future Media's "Newtype" series, a line of in-development voicebanks and counterpart to Yamaha's Vocaloid software.

The story of Project SEKAI takes place in a world very similar to ours, where the voice synthesis software Hatsune Miku, Kagamine Rin, Kagamine Len, Megurine Luka, MEIKO, and KAITO are popular music icons recognized the world over. In this world, there exists the concept of "Sekai": pocket universes formed through the power of thought where music is born. Through the power of an "Untitled" song, humans can travel into the Sekai and, through the strength of their emotions and will, transform a Sekai into a new song. Project SEKAI follows the stories of several unique individuals whose fates align through the "Untitled" song and the music born from their bonds.

The Sekai found throughout the game are split into one of five types: Band, Idol, Street, Musical, and Underground. Each Sekai stars a group of talented young musicians, each accompanied by the Crypton Vocaloids.

Gameplay consists of traversing between the real world and the Sekai, interacting with a wide range of characters along the way. In songs, players tap, hold, slide and flick notes as they approach a bar at the bottom of the screen, all while backed by gorgeous 3D live videos starring the Vocaloids and their bandmates. Through a gacha, one can collect additional outfits for the characters to wear in both 3D and 2D (animated in Live2D) scenarios. The game also features a special mode called "Virtual Live" where groups of players can join up and attend virtual concert versions of in-game performances on a regular basis.

As a spinoff of the Project DIVA series, Project SEKAI's song list consists of Vocaloid songs both returning and new to the series, featuring a wide range of producers. Unique to Project SEKAI is "SEKAI Ver." songs, new arrangements of Vocaloid hits that combine the Vocaloid's performances with the game's original characters. "Virtual Singer Ver." songs are available as well, for players who want to play to the tunes that they know and love. In addition, the game heavily features brand-new songs commissioned specifically for the game; while commissioned songs are nothing new to the SEGA feat. HATSUNE MIKU Project franchise, Project SEKAI weaves them into the story through a regular event schedule, with new events and songs added every other week.

open/close all folders
Featured Songs
Note: Songs in bold are SEKAI Ver. only

A wiki for the game can be found here

International versions were announced on August 31st, 2021, the 14th anniversary of Hatsune Miku's release date, including an English version of the game

(as Hatsune Miku: COLORFUL STAGE!) and a Chinese version. The Chinese version launched on September 30th, 2021 in mainland China and South Korea and will be gradually made available to other Asian regions, while Hatsune Miku: COLORFUL STAGE! will be released on December 7th, 2021 to 130 countries worldwide, with an open beta test released on October 4th, 2021.