Kiss Me, I'm Virtual
aka: Kiss Me I Am Virtual 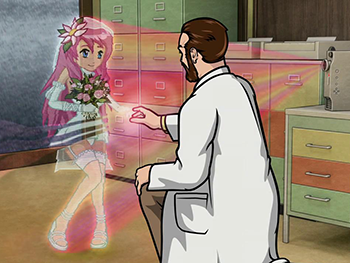 She's the light of his life.
"I mean, you come in here, you don't help me, you say the one plan I've got is bad, you-you claim to be a creation of my mind and yet you are in no way dressed provocatively!"
(notices that "Sam Carter" is suddenly dressed provocatively)
— Dr. Rodney McKay, Stargate Atlantis, "Grace Under Pressure"

Ah, love, the chance for two minds to seek each other out bask in each their beloved's presence... unless one of you doesn't really have a mind.

The actual human being in the equation may or may not be aware of the situation, but it makes things that much ickier if they are — especially if the simulation in question is, arguably, not truly sentient in any meaningful sense (for an extreme example, remember that Pygmalion fell in love with a statue before Aphrodite brought it to life). If the inhuman entity is based on a real person, expect them to discover what's been going on at some point.

Alternative Title(s): Kiss Me I Am Virtual