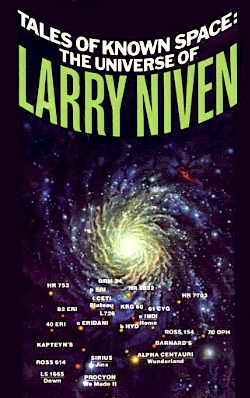 Known Space is a future history setting used by author Larry Niven as a base for thirty-five of his short stories and nine novels. It is generally considered by scholars of science fiction to be one of the most internally consistent, if not always the most scientifically plausible, SF settings in the history of the genre.
Advertisement:

Advertisement:
open/close all folders
Inhabitants of Known Space
Known Space features several well-realized alien species, many of whom are from planets of hats.
Niven's Tales and Novels
Stories and novels written by Larry Niven that take place in Known Space include:

Tales by Other Authors
Stories and novels written by other authors that take place in Known Space include: