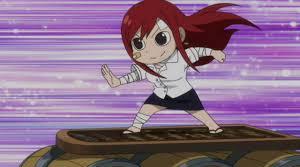 Erza Scarlet: Not So Above It All personified.
Advertisement: